Adm. Moran Out As Next CNO, So Who’s Next? 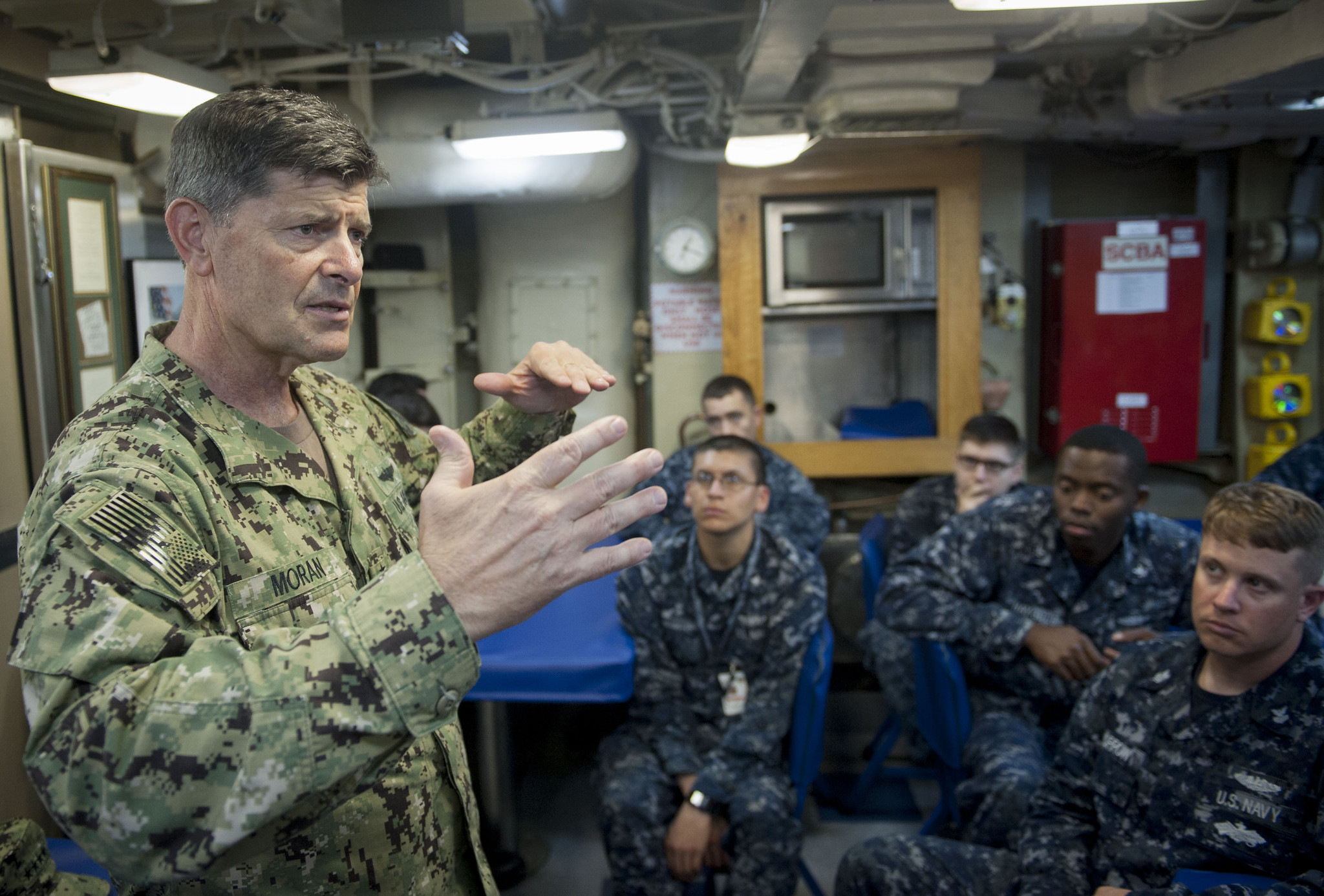 Adm. Bill Moran aboard the ballistic missile submarine USS Henry M. Jackson. Moran will retire instead of becoming the next CNO.

WASHINGTON: The fallout from the surprise resignation of the Navy’s choice to be the next Chief of Naval Operations is certain to create a domino effect across the sea service as officers bump up the ladder to fill in spaces.

Sunday evening, Adm. Bill Moran offered his resignation after Navy Secretary Richard Spencer called Moran’s judgment into question over his correspondence with retired Cmdr. Chris Servello, the service spokesman who left the Navy after allegedly groping a civilian staffer and making unwanted sexual advances toward junior officers — while dressed as Santa Claus at a 2016 holiday party.

Moran’s retirement looks to be partially the result of a Freedom of Information Act request from USA Today, which has been seeking his email correspondence with Servello, who Spencer described as “an individual who was held accountable and counseled for failing to meet the values and standards of the Navy profession.”

Moran’s ouster will force the service to move top officers around at the last moment to fill an unexpected opening.

It’s unlikely that Burke will be nominated CNO because that would then require another officer to be nominated to fill his job. Burke at the moment also represents some continuity in the service’s highest ranks, as the CNO moves out and the search for a new leader kicks into high gear. Rather, another four-star will likely be tapped for the top spot.

One of the prime candidates is Adm. James Foggo, currently serving as commander of US Naval Forces Europe and Africa. Foggo has extensive experience in Europe, and as a submarine commander.

Also high on the list is Adm. Christopher Grady of Fleet Forces Command, who has been in charge of manning and equipping the Navy for over a year, making him well-versed in the modernization priorities the service is pushing as it resets itself for the competition with modernized navies being put to sea by China and Russia.

Pacific Fleet commander Adm. John Aquilino, who like Moran was a career aviator, is also considered to be in the mix. Aquilino has plenty of Pentagon experience, having worked in the Legislative Affairs office and on the Joint Staff, and served as executive assistant to the commander, Fleet Forces Command. He took over at Pacific Fleet from Adm. Scott Swift in May 2018, in the wake of fatal mishaps to the USS Fitzgerald and USS John McCain that killed 17 sailors.

When it comes to Moran’s suitability for the CNO post, several retired Navy officers praised his character and professionalism and lamented the loss to the service.

Here's a totally utilitarian reason I am disappointed that ADM Moran was forced out as the next CNO. I am doing a lot of work on ISR/T @HudsonInstitute — and NO ONE in Navy leadership understood the importance of that work more. And that is because no one CARED as much.

Moran is a “highly respected officer and there was a plan — he had a plan for what he was gonna do as CNO,” said Thomas Callendar of the Heritage Foundation. Moran’s nomination for CNO was months in the making, giving him time to come up with his own plan for modernizing the force and thinking though who he wanted on his team.

Folks will say this is bad for Naval Aviation and point out that the Navy hasn’t had an aviator as CNO for a looong time.

I think such statements don’t give fair credit to the kind of leader Bill Moran is and how his depth in the Navy transcends warfare communities.

Now, “whoever you pick, now you’re behind the 8 ball and they will have to quickly ramp up and get up to speed on things” they might not have had full visibility on. One of the advantages Moran brought to the table was that he had been in the Pentagon for years, working on annual budgets, new shipbuilding and weapons programs, and the readiness issues following the deadly accidents of the USS John McCain and USS Fitzgerald in 2017. He is also a veteran of high-level posture hearings on Capitol Hill.