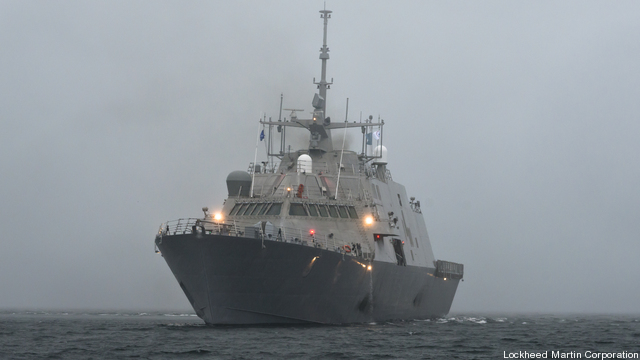 WASHINGTON: Even as two Navy admirals praised the Littoral Combat Ship to reporters in a hastily convened conference call, the House Armed Services Committee ordered the Government Accountability Office to investigate the program.

[CORRECTED (9 p.m. Wednesday) To Reflect That Navy Had Planned Interview For More Than A Week]

“It’s disturbing that the Navy would accept a ship that fails to meet the basic requirements for a tugboat,” sneered San Francisco Democrat Jackie Speier, who introduced the legislative language directing the GAO inquiry as an amendment to the annual defense authorization bill, being marked up today. Speier specifically cited reports of hull cracking, leaks, and corrosion on the first Littoral Combat Ship, LCS-1 Freedom, from both a recent Project on Government Oversight study — which already inspired an amendment last week from Rep. Duncan Hunter demanding details from the Navy — and a story this morning from Aviation Week. (Breaking Defense has also covered LCS extensively of late). Her amendment includes an ominous charge to GAO to investigate program managers and their industry partners to find out, in effect, “what did they know and when did they know it” about the potential for problems.

While the Navy wouldn’t say for the record what prompted the conference call, Public Affairs officials appeared to rush the press conferenceorganized it unusually quickly, announcing it over email only at 6:09 the night before and then phoning reporters individually that morning. However, a Navy source said later that the call had been in the works for more than a week. Reflecting suspicions among the press about the troubled program, when the two admirals on the line had no opening statements and invited questions, one reporter bluntly asked why they’d been convened so urgently.

“We’re here to talk about recent successes,” replied Rear Adm. James Murdoch, the Navy’s Program Executive Officer for the Littoral Combat Ship. LCS-1 Freedom is now out of drydock and back in the water; LCS-2 Independence has joined Freedom in San Diego; and LCS-3 Fort Worth just completed its acceptance trials (pictured above) on the Great Lakes on Friday.

The long-drydocked LCS-1 may be back in the water, though, but it’s not out of hot water yet: On the conference call, veteran Defense News reporter Christopher Cavas read from a recent internal Navy inspection that “the Freedom was evaluated as a no-go and is not recommended to proceed” with scheduled trials.

“The material inspection team is learning and I think the crew is learning” about the unique characteristics of the ship, replied Rear Adm. Thomas Rowden, the second flag officer on the call, who oversees LCS as well as traditional frigates, destroyers, and cruisers in his capacity as the director of Surface Warfare on the staff of the Chief of Naval Operations. The “no-go” evaluation simply reflects the Navy’s stringest standards, he said. “Certainly, Freedom was not the first one to get a no-go, and the insurvs [official Navy inspections] have been subsequently completed on a bunch of those ships and they’ve all done fine,” Rowden said. “There are no alarm bells in my mind.”

With LCS-1 under such fire, Rear Adm. Murdoch was at pains to point out improvements in LCS-3, the second LCS built by the team of Lockheed Martin and Marinette Marine. (LCS-2 is a different design from a different industry team, General Dynamics and Austal, and so far, intriguingly, it’s steered clear of the criticism; more below).

“The trial went very well,” said Murdoch. Comparing the two Lockheed ships’ trials, he said, “the number of major deficiencies [was] reduced from over 50 on LCS-1 to less than ten on LCS-3,” all of which he is confident can be corrected before the new ship leaves the Great Lakes. Murdoch also inspected construction work on the third Lockheed ship, LCS-5, “to particularly satisfy myself as the ship was coming together that we had improved our welding processes and made sure we didn’t have a recurrence of that six-inch hull crack that occurred on LCS-1,” he said. “We haven’t seen any of those types of issues on [LCS-]3. We think that issue is well understood and quite frankly it’s behind us at this point.”

Not only is quality control improved, Murdoch argued, but LCS-3 and subsequent Lockheed Martin ships — the odd-numbered Littoral Combat Ships — are also a significantly improved design over LCS-1. The hull is longer, he said, which improves stability, increases fuel capacity, and even increases the ship’s cruising speed. Both the Lockheed and General Dynamics LCS designs have two sets of engines, diesels for ordinary sailing and gas turbines that kick in for dashes at over 40 knots; Murdoch say the speed improvement will come while using the more fuel-efficient diesels, especially good news given past concerns about the ship’s fuel consumption reducing its range.

The dog that isn’t barking in all of this, intriguingly, is LCS-2, the Independence, built not by Lockheed and Marinette but by the team of General Dynamics and Austal to a very different design. It’s possible that the Navy simply hasn’t run the GD ship as hard: LCS-2 is being used to test mine-warfare gear, which generally requires slower, less demanding operations than high-speed dashes like the one LCS-1 did pursuing drug dealers in the Carribean last year. But it’s also possible that the design differences have an impact, literally.

The Lockheed design is essentially a giant speedboat, achieving the high speed the Navy wants from LCS by skimming across the surface of the water, then settling lower in the water at cruising speed. The General Dynamics design is a trimaran — like a catamaran, only with three hulls — that puts the hull under less stress at high speeds and keeps key areas much higher out of the water at all times. (The triple-hulled design also gives LCS-2 a much wider flight deck and mission bay than the Lockheed LCSs, an operational advantage). The GD ship is also all-aluminum, while Lockheed has an aluminum superstructure on a steel hull, which is arguably stronger but potentially creates what’s called “bimetallic corrosion” where the two different metals make contact.

Interestingly, the recent POGO report not only criticizes LCS-1 but the very concept of buying two different designs from different contractors, urging the Navy to settle on just one — implicitly the General Dynamics design. Either there’s another bad news story just waiting to break, or the General Dynamics LCS is genuinely better.