Afghanistan ‘As Good As It’s Going To Get’: Marine Commandant 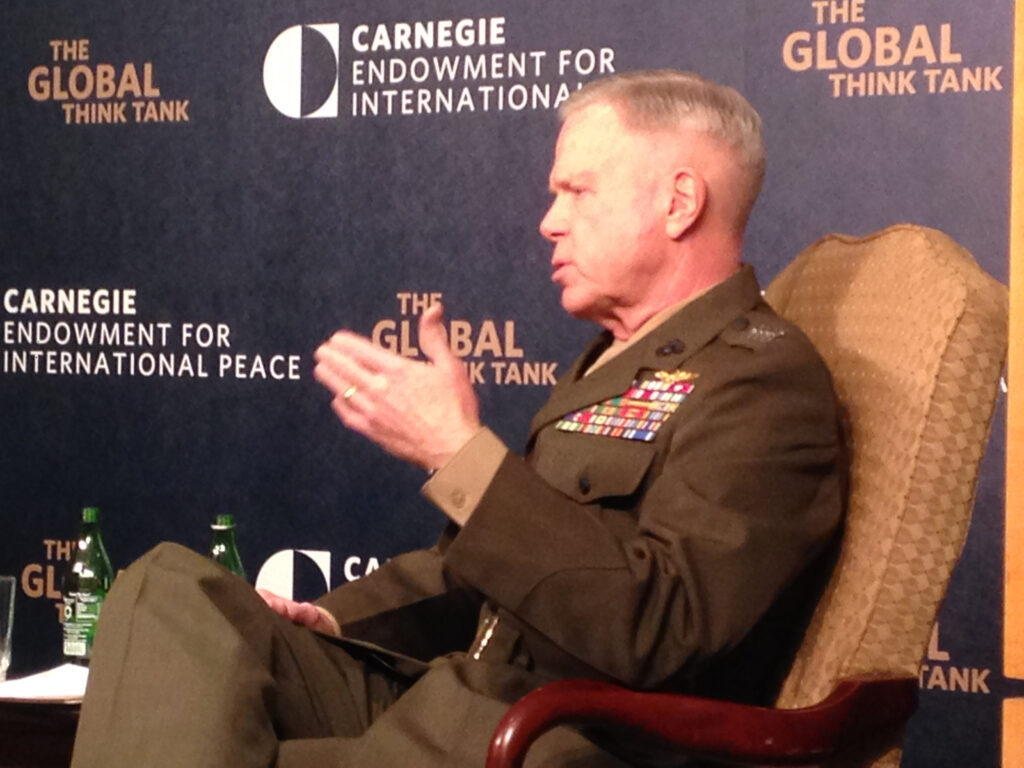 Gen. James Amos, Commandant of the US Marine Corps, speaking at the Carnegie Endowment this afternoon.

As America winds up its 13-year war in Afghanistan, where do things stand? “I leave this Saturday night [for Helmand province] to meet the governor and the provincial police chief,” Gen. James Amos said this afternoon. “My sense is, it’s about” — and here he paused — “it’s about as good as it’s going to get.”

“I never say ‘winning’ or ‘losing,'” continued the Marine Corps Commandant, speaking at the Carnegie Endowment for International Peace. “What I do say is, I am confident that, by December of this year, we will have set the conditions for the greatest opportunity for the people of Helmand and Nimroz province to be able to succeed.”

Those two Afghan provinces make up “Regional Command Southwest,” where the US Marines and the British have been in the lead. While Amos is not the commander on the ground, those commanders are mostly Marines and he visits frequently.

Having worked for years with the Afghan army, the national police, and the civil government, “I think we’ll have done everything we can by this December, so I feel good about it,” Amos said. “I want to see Afghanistan succeed — maybe not to my standards, but the standards that work for them.”

A NATO ministers’ meeting later this month will be “critical” to shoring up support for Afghanistan’s future stability, Amos added. And while the general was naturally reluctant to give public advice to his political superiors, he did offer one major warning:

“‘We need to be very circumspect and take a lesson from Iraq, [where] we spent our nation’s treasure and then we pulled out,” Amos said, pointing to the escalating violence in Iraq. “I don’t want that to happen in Afghanistan,” he said. “We can ill afford to simply pull out and go home.”

That said, Amos noted, it’s not entirely up to us. The Wall Street Journal reported that the administration is now trying to wait out the intractable president Hamid Karzai and sign a Bilateral Security Agreement for a post-2014 presence with whoever turns out to be Karzai’s successor. “I don’t know if that’s true or not,” Amos said. “I just read the same paper you did.”

If the US waits too long for a deal and then it falls through, he added, there may not be enough time to ship all the Marine Corps’ equipment out of the country before the end of 2014, although 75 percent of it is already gone.

Whatever happens in Afghanistan, Amos said, the future of the Marine Corps includes more such messy conflicts. “It’s not all going to be insurgency, but it will all be among the people,” he said, referring to Mao’s description of guerrilla fighting as “war amongst the people.”

“My sense is there will be no peace dividend” post-2014, the commandant warned. “While we as a nation may be done with the thorny and nasty entanglements of this ‘new normal,’ they are likely not done with us.”