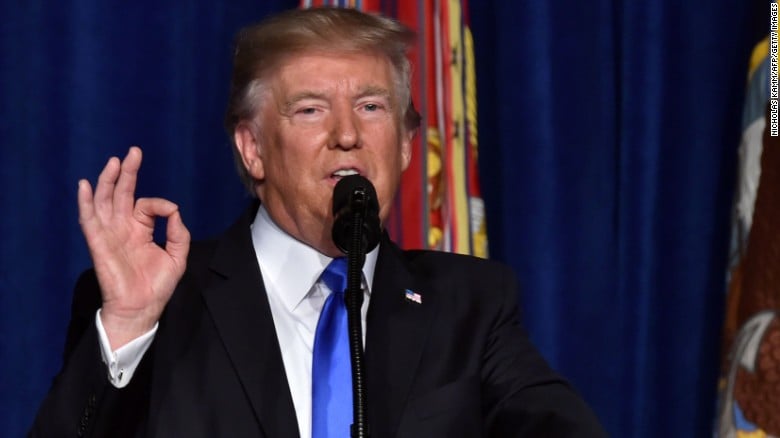 When he stepped before the cameras last night to deliver his first prime time address to the nation, Donald Trump became the third president to reluctantly take ownership of the war in Afghanistan. After campaigning on ending costly entanglements for a war-weary country, the president admitted he was hemmed in by some hard realities.

“A hasty withdrawal would create a vacuum that terrorists, including ISIS and al Qaeda, would instantly fill, just as happened before 9/11,” Trump said. “Today, 20 U.S.-designated foreign terrorist organizations are active in Afghanistan and Pakistan — the highest concentration in any region anywhere in the world.”

Though Trump declined to provide specific numbers, the new Afghan strategy he unveiled last night includes roughly 4,000 additional U.S. reinforcements to the 8,400 presently deployed. U.S. officials say the new strategy will involve: helping improve the Afghan government’s ability to support and regenerate Afghan Security Forces who suffered 6,700 casualties just in the past year; relaxing the rules of engagement for U.S. airpower; rejecting deadlines for the withdrawal of U.S. troops, instead using “conditions on the ground” as the primary metric of success; persuading NATO allies to increase their own troop levels in Afghanistan; and putting significant new pressure on Islamabad to target the Taliban and allied extremist groups operating in Pakistan.

“We can no longer be silent about Pakistan’s safe havens for terrorist organizations, the Taliban, and other groups that pose a threat to the region and beyond,” Trump said. “Pakistan has much to gain from partnering with our effort in Afghanistan.  It has much to lose by continuing to harbor criminals and terrorists.”

Trump becomes the third U.S. president to try and pressure Pakistan to take a harder line on the Afghan Taliban and allied extremist groups operating on its territory, some of which its intelligence services support as proxies. Defense Secretary Jim Mattis has already withheld $50 million in funding from Pakistan because he can’t certify that Islamabad “has taken sufficient action against the Haqqani Network,” a particularly lethal branch of the Afghan Taliban. To help prod Pakistan to action, Trump touted America’s close relations with India, saying America would “further develop its strategic partnership with India,” saying “we want them to help us more with Afghanistan, especially in the area of economic assistance and development.” 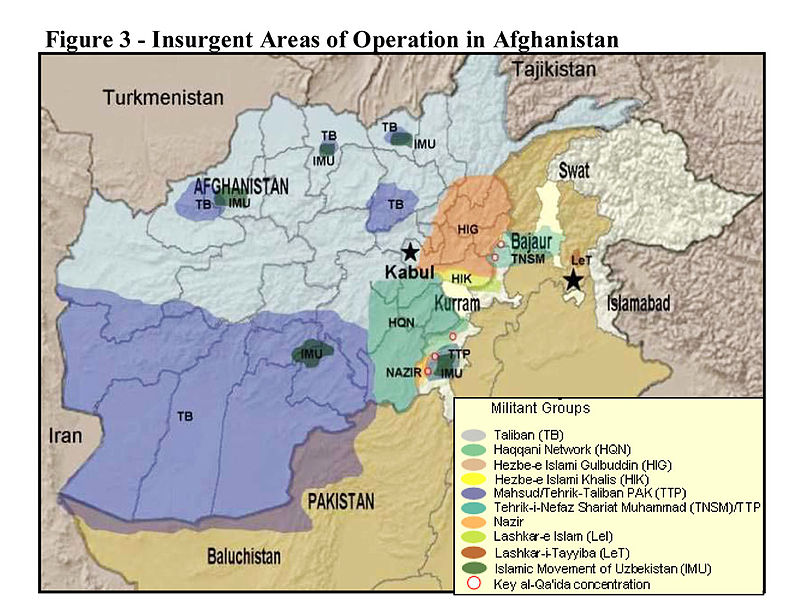 Few national security experts are optimistic the Trump Administration can fundamentally change Pakistan’s tolerance for extremist groups. Given the weakness of the government in Islamabad, which maintains a nuclear weapons arsenal in a country rife with jihadist groups, there is only so much pressure U.S. administrations have felt comfortable applying. And without a fundamental change in Pakistan’s strategic calculations, the “victory” Trump promised the nation last night will prove elusive, experts say.

Ambassador James Dobbins was the Obama administration’s special representative for Afghanistan and Pakistan 2013-14, and is co-author of Rolling Back the Islamic State. “As long as the Taliban enjoys a sanctuary in Pakistan where it can freely operate, I don’t think winning is a viable option in Afghanistan. However I do think we can achieve a stalemate with these additional troops that, if it persists long enough, may lead to a negotiated settlement of the conflict,” said Dobbins, currently a distinguished chair in diplomacy and security at the RAND Corporation. For all its Third World limitations and corruption, he also believes the Afghan government deserves additional U.S. support at a critical moment. ‘

“By the standards of the region, I believe the government in Kabul is an extremely reliable partner, much more so than Iraq, Syria, Yemen or many other places where U.S. forces are involved in counterterrorism operations. It has a freer press, more democratic elections, and is more pro-American than any of its neighbors such as Pakistan, Iran, Uzbekistan, or Turkmenistan. A U.S. presence and security partnership is actually a vote-getter in Afghan elections. There’s not another Islamic country in the world where that is true.”

For a president whose distaste for “nation building” and foreign entanglements is palpable, the decision to surge troops to Afghanistan and take ownership of the war was one of the most difficult of his young presidency. The American public largely perceives the Afghan war not only as the nation’s longest, but also one of its least satisfying. In a 2015 ABC News/Washington Post public opinion poll, for instance, 66 percent of respondents said considering its costs to the United States versus benefits, the Afghan war was not worth fighting.

And yet the generals that Trump has surrounded himself with tend to see not one long war, but a conflict in distinct phases, during which the fortunes of the Taliban and allied extremist groups have waxed and waned depending on the level of U.S. engagement. First came the immediate post-9/11 phase in 2001-2002, when the Taliban were toppled and remnants of Al Qaeda were sent retreating into Pakistan, followed by years in which Afghanistan was largely pacified. Then the Pentagon shifted its focus and forces with the 2003 invasion of Iraq, however, and became mired in that conflict for years. By 2008-9 the Taliban had recaptured large swaths of territory in eastern and southern Afghanistan.

The Obama “surge” of 2009-2012 culminated in the deployment of nearly 100,000 U.S. troops, who took back that lost ground and helped build an Afghan Security Force of roughly 340,000 troops and national police. President Obama set a 2014 deadline for handing the war off to Afghan Security Forces, and had hoped to have all U.S. troops out of Afghanistan by 2016. Those plans were put on hold after major Taliban gains. Today the Islamist insurgents again control or contest an estimated 40 percent of Afghanistan.

“I think it’s hugely important to remember why we went to Afghanistan in the first place, and why we have stayed: to ensure that Afghanistan is not once again a sanctuary for Al Qaeda, the way it was when Al Qaeda planned and conducted the initial training for the 9/11 attacks,” retired Gen. David Petraeus, who commanded the U.S. troop surges in both Iraq and Afghanistan, writes in an email.

Unfortunately because of the overly-rapid drawdown of U.S. forces and restrictions placed on coalition airpower, he noted, the Taliban has regained control of areas the U.S. drove them out of during the 2010-2012 surge. “That was quite predictable. And I have no doubt that if the Taliban are successful, the likes of Al Qaeda and the Islamic State will once again find sanctuary in Afghanistan,” Petraeus writes. “In the meantime, the Afghan government and security forces have proven that they are willing to fight and die for their country, and I firmly believe we should do more to support them.”

The Trump administration’s new Afghan strategy represents an important victory for Lt. Gen. H.R. McMaster, Trump’s national security adviser and the strongest proponent within the administration for a mini-surge of U.S. “train and assist” troops to break a stalemate and roll back recent Taliban gains. McMaster had been engaged in an increasingly bitter and public tug-of-war over Afghan policy with recently-fired White House chief strategist Stephen Bannon, who wanted Trump to pull U.S. troops out of Afghanistan.

McMaster sold the new strategy to Trump as a correction to failed Obama administration policies. Even before joining the administration, for instance, he publicly criticized the Obama administration for setting artificial deadlines for troop withdrawals on the faulty assumption that “war will end if we just disengage from it,” as McMaster put it in one speech. Like many officers in the senior military ranks, McMaster believes that Obama’s premature withdrawal of U.S. troops from Iraq in 2011, and the subsequent rise of the Islamic State there, offered an abject lesson in how not to end a war. Retired Marine Gen. White House Chief of Staff Kelly is known to share that view.

“We saw with the precipitous withdrawal of U.S. troops from Iraq and the subsequent fall of Mosul what happens when you withdraw before making military gains permanent,” McMaster said during a recent conference hosted by the Center for a New American Security. He also rejected the idea that the new strategy is simply doubling down on a failed 17-year-long effort.  “War does not progress linearly,” said McMaster. “The Taliban and its sponsors have taken advantage of some disconnects in what we are doing militarily, and what we’re trying to do politically. We’re trying to talk to the Taliban about political solutions as we’re disengaging militarily, sending the message that we’re leaving and you’re winning.”

As for intensifying pressure on Pakistan to finally end its tolerance of extremist groups using its territory for sanctuary, McMaster sees no alternative. “We need to insure that the leadership of the Taliban and Haqqani Network do not enjoy uncontested safe haven in Pakistan, where they feel no pressure,” said McMaster at the CNAS conference. “How can it be that Taliban fighters are destroying schools in Afghanistan, while Taliban leaders send their children to private schools in Pakistan?”