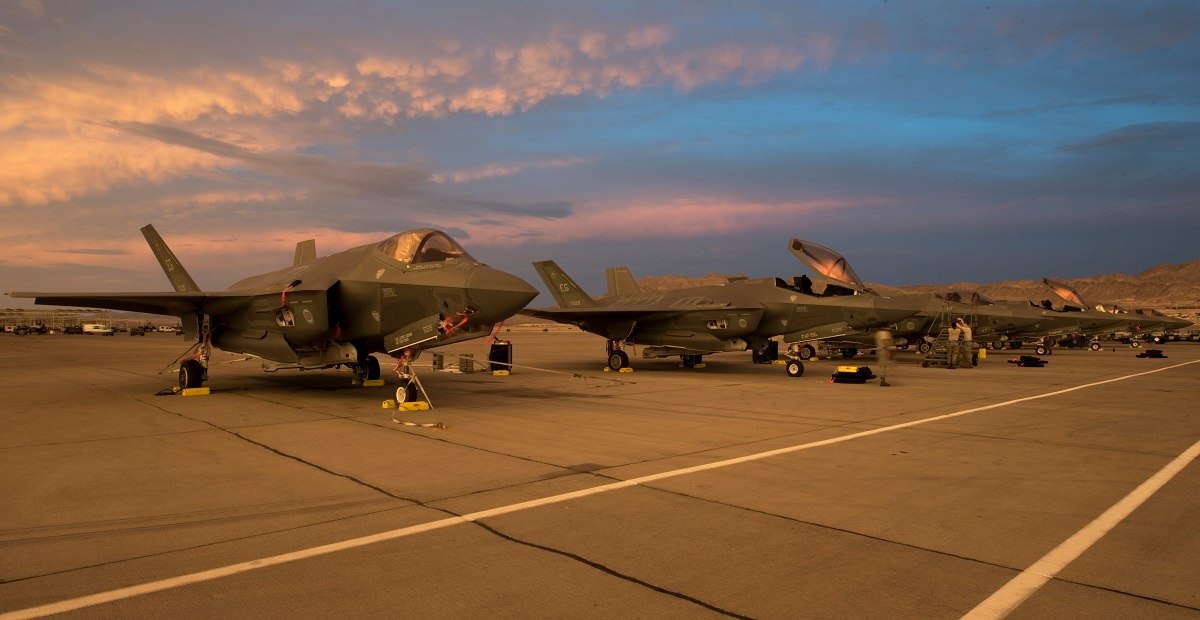 F-35As on the flight line at Nellis AFB. DOTE says too many planes are spending too much time on tarmac.

CAPITOL HILL: In what was clearly a long and somewhat tense meeting last week, Lockheed Martin got an earful from the Office of Secretary of Defense and the Air Force about its inability to improve the performance and reliability of the F-35.

I asked Lt. Gen. Arnold Bunch, the top uniformed official for Air Force acquisition, how concerned the Air Force is that Lockheed Martin has not been able to improve fleet availability above 60 percent for three years. The Director of Operational Test and evaluation issued his annual report yesterday and that fact was the grimmest in the review of the F-35.

“There was no improving trend in fleet aircraft availability….Fleet-wide average availability is below program target value of 60 percent and well below planned 80 percent needed for efficient conduct of IOT&E,” the report says. “The trend in fleet availability has been flat over the past 3 years; the program’s reliability improvement initiatives are still not translating into improved availability.”

More broadly, Robert Behler’s report says that the “reliability and maintainability metrics defined in the JSF Operational Requirements Document are not meeting interim goals needed to reach requirements at maturity.”

To his credit, Bunch addressed the question, although he had not been briefed on the DOTE final report.

“I’m not going to duck this one,” he said, clearly indicating he had considered just that.

“We are trying to get to that 80 percent number readiness rate for our combat coded aircraft,’ Bunch said. “We have a list of systems that are not performing as well as we want — the big drivers — and we are going to measure to see if we get the performance that we expect.”

Lockheed Martin, unsurprisingly, defended the program, saying, that “system reliability continues to improve and all variants of the F-35 are currently exceeding nearly all reliability specifications at this point on the maturity growth curve. With enhanced reliability, newer aircraft are now averaging greater than 60 percent mission capable rates with some operational squadrons near 70 percent.” Of course, it doesn’t rake a rocket scientist to note that 70 percent is not 80 percent.

The company expects readiness rates “to significantly increase and operating costs to decline” as it delivers newer planes, it said in a statement.

The Air Force, Joint Strike Fighter program office, and Lockheed Martin are developing a new plan for life cycle support, Bunch said. He personally attended a meeting a week ago with the Office of the Secretary of Defense and Lockheed. He wouldn’t say how long it was, which suggests it was painfully long, and his tone made clear it wasn’t a particularly happy discussion.

The other notable fact in the DOTE report, beyond continuing problems with ALIS, the logistics and mission planning system for the F-35, is that the F-35A 25mm gun, needed for its Close Air Support role, is not very accurate.

Here’s the damning language in the report:

“Based on F-35A gun testing through September 2018, DOT&E currently considers the accuracy of the gun, as installed in the F-35A, to be unacceptable.

“Investigations into the gun mounts of the F-35A revealed misalignments that result in muzzle alignment errors. As a result, the true alignment of each F-35A gun is not known, so the program is considering options for re-boresighting and correcting gun alignments.

But there is good news! The F-35B and F-35C guns are accurate and “meet the contract specifications.” While the F-35A carries a permanently installed internal gun, firing through a shutter in the side of the fuselage (as you can see in the video above), the B and C variants carry their gun in an optional external pod (see video below), which means it makes them less stealthy when installed, but apparently it shoots straighter.

(Bunch has been selected for a fourth star and will take over Air Force Materiel Command. We know he’ll he happy to leave the Pentagon.