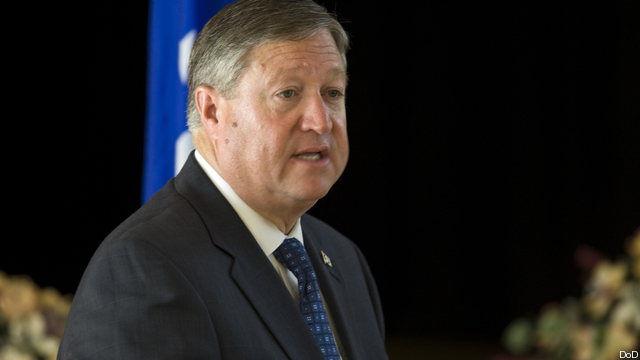 WASHINGTON: The longest serving Secretary of the Air Force, Mike Donley — harbinger of changing times for the service — is leaving his post after almost five years.

[Click here to read a series of op-eds Sec. Donley wrote for Breaking Defense on the future of the Air Force]

Donley will resign effective June 21. Rumors of Donley’s departure had been swirling for weeks. When I asked him when he was leaving at a Defense Writers Group breakfast on Tuesday, he shot me a careful smile and chuckled. Always careful, he wouldn’t even tell us if that was his last DWG breakfast.

Donley had the unenviable task of taking the helm of the Air Force after former Defense Secretary Robert Gates did what until then was unthinkable: firing both the service’s secretary —Mike Wynne — and chief of staff — Mike Moseley. Gates was either furious about the fact the Air Force lost some nuclear weapons or about Wynne and Moseley’s opposition to Gate’s position on the F-22 fighter, depending on who you talk with. Regardless, the circumstances of Donley’s appointment largely defined his tenure.

Loren Thompson, a member of the Breaking Defense Board of Contributors and one of the cannier observers of senior Pentagon leaders, largely cast Donley as a caretaker under whom the Air Force has hit “its lowest ebb in its history.”

“Secretary Donley was imposed on the Air Force as the result of a Pentagon purge, and that hobbled his ability to protect service programs. The Air Force is at the lowest ebb in its history, but the arrival of a dynamic new chief of staff seems to signal that better times lie ahead,” Thompson said in an email. “Whatever the political atmospherics may be, the Air Force continues to hemorrhage capabilities. F-35 is taking way too long to ramp up, there’s no replacement for aged radar planes, and efforts to terminate Global Hawk will undercut the Asia-Pacific strategy. Chief of Staff [Gen. Mark] Welsh needs a stronger partner at the top of the service.”

A congressional source was similarly shy of nice things to say about Donley:

“No, he did not “fix” the Air Force, much like [former Chief of Staff] General [Norton] Schwartz did not ‘fix’ the Air Force,” this source wrote. Donley was hired to “implement Secretary Gates’ mandates on getting the Air Force ‘back in the box’ and under ‘control…'”

This source characterized Donley as having done too little, too late. The outgoing secretary was “late to the fight in advocating strenuously in public for Air Force priorities, asymmetric advantages that US Air and Space forces bring to the fight, and will, much like General Schwartz, walk out the door with a feeling of, he should’ve been more aggressive sooner, rather than at the end of his term which you can see him doing now.”

So, in the best tradition of Washington, let us ask: who will be the next Air Force Secretary. Two sources, including the congressional person, said the next service leader will be female, per instruction from the White House. One source said Valerie Jarrett, widely considered to be Obama’s most influential advisor, had issued this fiat.

UPDATE: Debbie Lee James, according to one well placed source, is Donley’s most likely replacement. James, executive vice president for communications and government affairs at defense and intelligence giant SAIC, labored for a decade as a professional staff member on the House Armed Services Committee before becoming assistant Defense Secretary for reserve affairss during the Clinton administration. She’s worked at SAIC since early 2002. SAIC is, of course, run by former Air Force Chief of Staff, John Jumper. Coincidence? Don’t know. UPDATE ENDS [corrected James’ title at SAIC 9 am April 29]

The new secretary whomever it ends up being, faces enormous challenges that are unique to the Air Force. After a decade of war, during which the Air Force played a definitive second fiddle, the service must reassert itself, observers said.

“The biggest challenge for the next Secretary of the Air Force is everything,” said service advocate Mackenzie Eaglen, a member of the Breaking Defense Board of Contributors and analyst at the conservative American Enterprise Institute “A big part of the new person’s job will be to figure out what goes and what stays coming off a year when the service was handed its hat by Congress and rebuked in many of its budget and policy decisions.

On top of that, Eaglen, ticked off these issues:

Our congressional source said that the new secretary “will have the challenge of reminding folks that the unique advantage of our Air Force is that it’s always better in any major conflict to ‘go over and not through’ the enemy and that keeping recapitalization priorities on track in a reduced fiscal environment is going to be imperative,” the congressional source wrote.

Defense Secretary Chuck Hagel issued the usual kind words, noting that Donley “has been an invaluable adviser during my first two months as Secretary of Defense and has been an outstanding leader of the Air Force for nearly five years.

Hagel claimed that, “The Air Force he leaves behind is more resilient and more respected because of his leadership and personal dedication.” The comments from our sources certainly call Hagel’s judgement into question.

I’ve worked with Donley throughout his tenure. The man has given much of his adult life to public service and possesses a calm and disciplined public demeanor that often serves him well in his battles. His history of service has few rivals. He played a key role in setting up the famous Packard Commission, worked on the National Security Council and held down a professional staffer’s gig in the Senate Armed Services Committee. After a decade outside the Pentagon, Donald Rumsfeld brought Donley back in 2005. The man has served his country since then. Few serve their country at such a senior level for so long. He deserves our respect for that alone.