Allies And 21st Century Weapons: The F-35 Comes To Europe 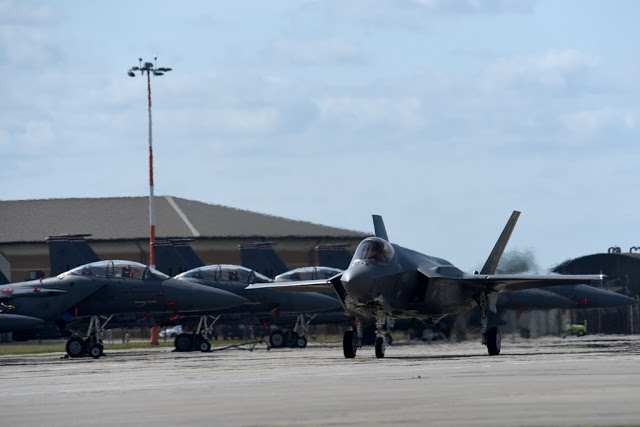 An F-35A taxis after landing at Royal Air Force Lakenheath.

A key dynamic in the shift from COIN-centric land wars to a twenty-first century combat force is what the US and its closest allies will learn from each other thanks to the core weapons systems they are buying at the same time.

Hidden in plain view is the emergence of a significant driver of change  –- flying the same aircraft at the same time and learning from each other.

A case in point is the F-35. There was much press on the recent arrival of Air Force F-35As in Europe, landing at RAF Lakenheath, operating from there and then some of those aircraft going to Estonia and then Bulgaria. The Supreme Allied Command Europe (SACEUR) himself showed up at Lakenheath to underscore how significant the arrival of these aircraft was.

For example, in a Wall Street Journal article by Robert Wall, “US Jet Fighters Flex Muscle Amid Russia Tensions,” the arrival of the USAF jets in the UK and in Europe is highlighted. Wall notes that the U.S. does not intend to permanently deploy the jets in Europe until 2020, and that “several allied air forces, are also buyers.”

But missing in plain view (or perhaps plane view) is the reality of the F-35 global enterprise created before the arrival of any permanent U.S. deployment, and that that global enterprise is being laid down by the US and its allies, not just the U.S. by itself.

Look at the United Kingdom. Hidden in plain view is the fact that the UK is standing up its F-35 base BEFORE the United States. And the first squadron for the UK — and Australia for that matter — is being trained and equipped in the United States before their arrival in each of their countries. This is a case of the pilots and maintainers learning common approaches from the ground up before standing up the new F-35 bases.

Not only that, but the facilities being established in Europe can provide a key sustainment and operational enterprise which the US and its allies can leverage in common. If the US follows an innovative sustainment model it can gain significant savings and operational advantages by leveraging the European infrastructure, rather than flying in parts and other materials to support ITS jets. The savings to the lift and tanking fleet for the Air Force could be very significant indeed.

It is not just about the US sending advanced jets to Europe; it is about the US being smart enough to embed its jets in a broad renorming of airpower because the F-35 will be a significant part of the allied combat fleet at virtually the same time.

I visited RAF Lakenheath last year and recently visited both RAF Marham and RAF Lakenheath to discuss the progress of the F-35 bases at both facilities. The F-35 is a data rich-aircraft and needs an advanced basing infrastructure to support it, as do some other aircraft such as the Wedgetail, P-8 and Triton. The UK and the US are rebuilding in common their respective bases from which they will operate their F-35s.

During my visit to Marham, I toured the new facilities and spoke with senior staff about the way ahead. A staff of 17 at the Lightning Force headquarters support the operational standup with nine focused on infrastructure aspects to get the base ready to receive their first contingent of F-35Bs next year from their current US base.

Training, maintenance and other centers are being stood up. At the heart will be the National Operations Center in which logistics and operations are collocated. The U.S. will have personnel in this center as well.

There are multiple synergies involved with the F-35 and the standup of the Marham Air Base, two of which highlight the US-UK working relationship. The first is the synergy from America to the United Kingdom and back again. The UK has operators at Pax River, Edwards, Eglin and Beaufort Marine Corps Air Station. The planes coming from Beaufort will provide the standup for the first RAF squadron, namely, 617 squadron.

The second synergy is between the creation of the bases and the lessons learned. Marham, for example, is being stood up and is providing operational lessons learned back to the United States, both in terms of the U.S.’s standup of its own foreign bases and at home, and, notably, in shaping a new operational dynamic for RAF Lakenheath.

The Air Force F-35As at Lakenheath can become integrated into the operational, training and support elements in the UK as well. Wing Commander Butcher, the CO of 617 Squadron, underscored the possibilities: “We want to take forwards everything that we’ve done in the pooling and implementation agreement in the United States, and try and see how we can transpose that into a UK model.

“We’re looking to have jets taking off, F-35A’s taking off at Lakenheath. Well, what if they have an issue and they need to land in Marham. Rather than take the time to move people, spares etc from Lakenheath up to here, what’s to say that we couldn’t conceptually have some maintainers from 617 Squadron repair the jet, sign off, send it flying again, Butcher said. “Lakenheath is going to be a busy base with the closure of Mildenhall. Increased efficiencies working with us would make sense. Could we potentially have F-35As operating out of Marham on a daily basis? How do we organize hot pit operations on each other’s base? One can easily see how that could buy you a lot of combat flexibility, in terms of how you might do maintenance operations.”

“We will both operate the F-35 from Marham and Lakenheath respectively, which are very close to one another. Shaping synergy between the two bases is clearly an important objective. We are working this process in a step-by-step manner, from understanding how we might operate F-35As from Marham and F-35Bs from Lakenheath, to deeper sustainment and training opportunities as well.”

But the potential is even greater for synergy from the two bases working together across the region.  During my visit last year I discussed the impact of the synergy of the US and the allies standing up at the same time the new air combat force with then-Col. Robert Novotny, the 48th Fighter Wing Commander. (He’s now Brig. Gen. Novotny, deputy director of plans and programs at Air Combat Command on Joint Base Langley-Eustis.”

“We are not flying alone; but joined at the hip,” Novotny said. “We will be flying exactly in the area of interest for which the plane was designed and can fly together, maintain together, and operate together leveraging the air and sea base for which the F-35 B will fly from as well. It is a unique and strategic opportunity for the USAF and for the nations.”

Adding other allies will only deepen the strategic impact that these allied bases will have. “As we get this right, we can bring in the Danes, the Norwegians and Dutch who are close in geography, and the Israelis and Italians as well to shape the evolving joint operational culture and approach,” he said. “Before you know it, you’ve got eight countries flying this airplane seamlessly integrated because of the work that Lakenheath and Marham are doing in the 20-nautical miles radius of the two bases.”

The Royal Air Force, the Royal Australian Air Force, the US Air Force and the Marines are already learning how to integrate the F-35 into the air combat force at the Red Flags exercises. Recently, the French Air Force were added to a Langley trilateral training exercise. But integration will be accelerated by the integration of normal operations from common bases throughout the European region as well.

As Novotny put it: “Doing Red Flags requires bringing forces to Nellis and expending monies to come to the exercise, clearly an important task notably in learning to fly together in high intensity warfare exercises. But what can we shape from the RAF Marham and Lakenheath bases is frequency of operations with core allies flying the same aircraft.”

“The same aircraft point can be missed because the UK did not fly F-16s. The Norwegians, the Danes and the Dutch do. And the US Air Force does not fly Typhoons and Tornados; the UK does. Now they will ALL fly the same aircraft.”

“I did two OT assignments and we worked to get into Red Flag when we could to do joint training. Here we can do that virtually every day. We reach the Dutch training airspace, and can work with the Dutch, with the Brits, with the Germans, with Typhoons, with F3s, with the NATO AWACS. We take off and we fly 30 minutes to the east and we make it happen. It is Red Flag as regular menu; rather than scheduling a gourmet meal from time to time.”

In short, the UK is leading the way in shaping a new infrastructure for a 21st century air combat force. With its operational footprint at RAF Lakenheath, the US Air Force is well positioned to interact with this. With the RAF and the USAF setting up four squadrons of F-35s between them at two nearby RAF bases, there is a clear opportunity to shape a common sustainment solution.

The impact of so doing could be significant on the North Sea neighbors — the Danes, the Norwegians and the Dutch. This is all clearly a key way ahead in building NATO capabilities, which provides a 21st century example of burden sharing.

Robbin Laird, a member of the Breaking Defense Board of Contributors, is an international defense consultant, owner of Second Line of Defense website and a former National Security Council staffer.