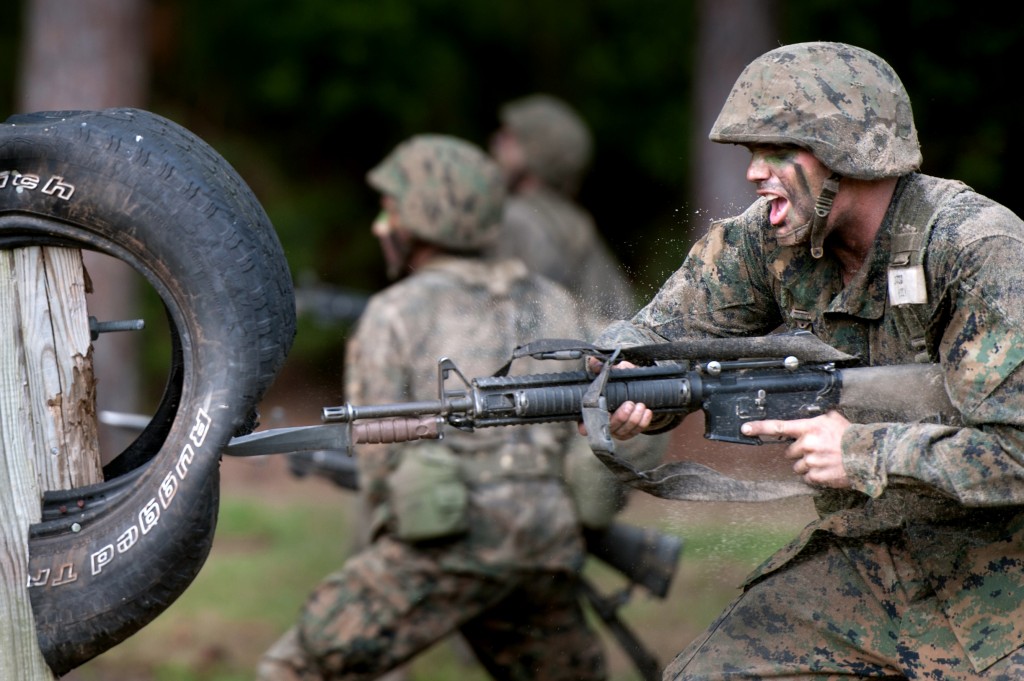 REAGAN LIBRARY, SIMI VALLEY, CA: Sometimes you have to listen closely to the soft-spoken Chairman of the Joint Chiefs of Staff. Sometimes the Commandant of the Marine Corps says “hey, Sydney!” and hands you his message on a plate. But this Saturday, both Army Gen. Martin Dempsey and Marine Gen. James Amos were talking about more than just stopping sequestration, as the ongoing 10-year, $500-billion cut to defense spending is known. Of course they want to stop that across-the-board cut. But they’re something more specific they want to stop as well: Both generals warned against slashing old-fashioned ground forces in the hope that high-tech air- and seapower will win us the next war.

Although the Army is under the greatest threat, sequester is pure agony for every part of the Pentagon. Senate Democrats and House Republicans are locked in the 2014 budget conference at this very moment, with a deal to stop, soften, or at least slow down sequester very much in doubt. And it was precisely to raise the pressure for such a deal that East Coast potentates from Defense Secretary Chuck Hagel on down flew 3,000 miles to the resting place of Ronald Reagan — the Republican icon of “peace through strength” — to the first-ever Reagan National Defense Forum.

As painful as sequestration is, however, its real effect inside the Pentagon was to turn up the heat on a debate which was already underway and which will continue even if sequester goes away. (Unlikely). Even without sequester, defense budgets would still be shrinking, 12 years of ground wars would still be winding down, and the air, sea, and cyber threat of China would still be rising in the east like a red sun over the Pacific. Even without sequester, the debate we’ve had after every war since 1945 would have reignited: Should the US pay for a large ground force in time of peace — which the Founding Fathers considered anathema — or should it invest in air- and sea forces that rely on modern America’s favorite answer to every problem, high technology?

The last time we had this debate was from 1991 to 2003. Back then, advocates of a “revolution in military affairs” prevailed with their argument that precision-guided “shock and awe” would eliminate the need for prolonged ground fighting. (It didn’t). Now the war over the next war is starting up again.

The Marines are always in the middle: They have their own fighter squadrons and dedicated Navy ships, but ground troops — “every Marine a rifleman” — are at their heart. While Army Chief of Staff Gen. Ray Odierno has led the charge for the continued relevance of ground forces, even implicitly criticizing his civilian masters, the Marine Corps Commandant has been more reserved.

But he wasn’t this weekend. “Hey, Sydney!” Gen. James Amos said when he noticed me lurking beside him with my iPhone ready to record. Before the moderator of the just-concluded panel had cut conversation short, the Commandant told me, “I was about to talk about the ‘revolution in military affairs’ in 1998, how we drew the force down by 28% percent and how we invested all our money in bright and shiny things. [Then] 9/11 hit.”

Two precision-guided invasions in a row both degenerated into prolonged ground combat, “We bought off on a technology solution to solve what became a human-intensive operation,” Amos said. “You can’t just say we’re going to solve future warfare with a silver bullet.”

“It really becomes [about] human terrain,” Amos went on. That’s the post-9/11 Pentagonism for what Mao Zedong, the great strategist of guerrilla warfare, called “the sea of the people”: the ever-shifting currents of sect, tribe, and society that the Army and Marines learned, painfully, to navigate in Afghanistan and Iraq. (Not coincidentally, that human terrain/dimension/domain — the exact terminology is much debated — in which only ground troops can operate is central to the Strategic Landpower initiative co-sponsored by the Army, Special Operations Command, and Amos’s Marines).  Even in 21st century conflict, Amos told me, “it’s people, it’s relationships, and it’s presence that actually will end up carrying the day.”

Unless, as some have said, we can avoid long land wars in the future, I replied with not a little sarcasm.

“Unless we can,” Amos echoed with equal sarcasm, “and history has proven for centuries that is impossible.”

A little later, over lunch, the conferees heard from the Chairman of the Joint Chiefs of Staff, the deceptively soft-spoken General Dempsey.

“Well, look, I’m all for a short, brief, precise, limited, controlled conflict,” Dempsey said when conference organizer Roger Zakheim noted that the 2012 Defense Strategic Guidance calls for the US to avoid another long ground war like Iraq. “In fact, when we enter a conflict, I think that ought to be an outcome that we aspire to. But we should certainly have the depth available in the active[-duty force], [National] Guard, and Reserve in order to account for the very good possibility that we won’t be able to control it.”

That “depth,” Dempsey emphasized, is now at risk. So far, sequestration had fallen hardest on military readiness, since training, maintenance, and fuel accounts are the easiest funds to cut in a hurry. Reductions in the size of the force take longer, but they will come — and if sequestration lasts the full 10 years, they will cut deep by the end of that decade, he said: “The first half will be characterized by a lack of readiness and the back half will be characterized a by lack of depth.”

Dempsey did not say explicitly what kind of forces the nation most needed to have in “depth,” but he implied it was ground forces by both parable and allusion.

The parable was about his nephew Colin McNally, an artist who does age progression portraits of missing children. “‘Colin, why do you even have a job?'” Dempsey recounted asking. “‘Can’t a computer do what you do?’ And he said, ‘well, you know, Uncle Marty,’ he said, ‘it can do part of it'” — but there’s still a place for the human touch.

The allusion was Dempsey’s reading aloud from T.R. Fehrenbach’s history of the Korean War. That book’s most famous line — which Dempsey, subtly, did not quote — is emblazoned on the first page of the first chapter of Army Field Manual #1:

….you may fly over a land forever; you may bomb it, atomize it, pulverize it and wipe it clean of life—but if you desire to defend it, protect it, and keep it for civilization, you must do this on the ground, the way the Roman legions did, by putting your young men into the mud.

Those words are so associated with Fehrenbach in military minds that the mere mention of his name would invoke them — so Dempsey didn’t have to. Instead, he chose to read the last two lines of the book:

It is while men talk blithely of the lessons of history that they ignore them. The lesson of Korea is that it happened.

That the Korean War occurred at all was a surprise, Dempsey emphasized. So was how it started, when an America overconfident in its nuclear weapons technology saw Task Force Smith run over by North Korean tanks. Dempsey invoked yet more cases of conflicts escalating beyond our expectations: Robert McNamara declaring in 1964 we would never send ground troops to Vietnam, Abraham Lincoln calling up only 100,000 volunteers at the start of the Civil War, Custer underestimating the Indians at Little Big Horn and the British underestimating the Zulus at Isandlwana. (Note that these are all ground warfare examples).

“There is hubris in the belief that war can be controlled,” said Dempsey. “War punishes hubris.”

That is what America’s top military officer worries about, not just sequester. He also worries about cyber attack, “my personal nightmare,” though he offered little detail.

What does Dempsey not worry about so much? A conventional clash of nation-states. “The risk of state-on-state conflict…is actually at historic low,” he said, even as easier access to technology makes terrorists, guerrillas, and other irregulars more dangerous.

The Chairman has referred to this “security paradox” before. It is a veiled rebuke to those in the Pentagon — chiefly in the Office of the Secretary of Defense, the Air Force, and the Navy — who see nation-states as the real threat, not irregulars. That influential faction argues we should focus on the technologically advanced Chinese as the challenge of the future and reject low-tech, long-term counterinsurgency as a mistake of the past. If you substitute “Soviets” for “Chinese” in that sentence, by the way, you have the same argument that prevailed after our previous prolonged guerrilla war.

Gen. Amos joined up towards the end of Vietnam and lived through the demoralized, unready, underfunded “hollow force” that followed. “I came in 1970 and I had no idea it was a hollow Marine Corps,” he told me. “I lived through the ’70s and mid-80s, and I thought this was the way we did normally business. [Then] the Reagan buildup happened and all of a sudden we had [spare] parts, we had operations and maintenance money for training.”

Military leaders have warned repeatedly that the sequester threatens to return us to the dark days of the hollow force. As Amos looks ahead, however, he wants to avoid the mistakes of both the 1970s and the 1990s, the errors of unreadiness and of high-tech hubris. We need, he said, a ready and “balanced” force that has both superior technology and sufficient manpower.

The next war is coming, Amos said, though we don’t know where or when. “We’re going to have to fight with this force we’re developing sometime in the next ten years. History has shown that,” he said. “We’ve got to get it right. We can’t get it exactly right, but we sure as heck don’t want to get it exactly wrong.”