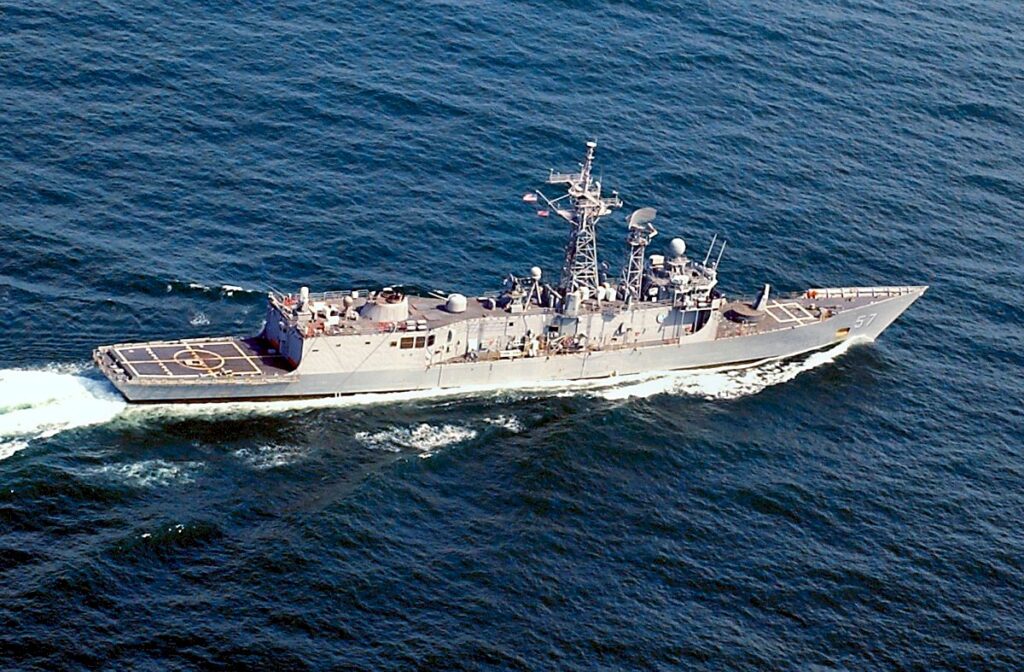 The former USS Reuben James was sunk in the test.

The supersonic SM-6 Standard Missile, designed to shoot down incoming aircraft and cruise missiles, has sunk a target ship in a test. The decommissioned frigate Reuben James went down off Hawaii in the January event, just disclosed today. The test was part of the Navy’s effort to rebuild its firepower to destroy enemy fleets, a concept called Distributed Lethality. Repurposing defensive missiles as offensive ones also reflects a Pentagon push to make old weapons do new tricks for a minimum added cost.

The USS John Paul Jones fires an SM-6 in an earlier test.

After the Soviet Union fell in 1991, the US Navy refocused from fighting hostile fleets to striking land targets. Air defense for carrier task forces and ballistic missile defense for friendly nations also became ever-higher priorities. As a result, destroyers and cruisers increasingly filled their missile tubes with Tomahawk Land Attack Missiles and defensive Standard Missiles — leaving less and less room for anti-ship weapons. What’s more, the anti-ship weapons we do have are almost all variants on the venerable Harpoon, which is outranged by newer Russian weapons and their Chinese copies. So with the return of Russia’s navy and the rise of China’s, the shortfall in fleet-vs.-fleet firepower has become painfully apparent.

The SM-6 is the latest variant in the Raytheon-built Standard Missile family. The SM-6 derives from the venerable SM-2 anti-aircraft missile but is souped up to take on low-flying cruise missiles. SM-2 always had some capability against surface ships, but this is the first time the more potent SM-6 has proven itself against such a target. The third sister, SM-3, is specifically designed to intercept ballistic missiles above the atmosphere — but the SM-6 has also proven versatile enough to shoot down ballistic missiles in some parts of their flight as well.

The SM-6 isn’t necessarily the ideal anti-ship or anti-ballistic missile weapon. But the more missions a single missile can perform, the more flexibility commanders have in combat. The Navy is also testing an upgrade to the Tomahawk that allows it to target moving ships as well as static targets ashore; while slower than the SM-6, and therefore easier to shoot down, the anti-ship Tomahawk has longer range, making them complementary. Having anti-ship capability in both weapons means Navy ships could do all three of their main missions — hitting land targets, fighting other ships, and anti-aircraft/missile defense — with just two sets of missiles. That effectively increases firepower by leaving fewer missiles unused because the ship isn’t currently doing the mission they’re made for.

Another effort to increase flexibility is called Cooperative Engagement Capability, in which one ship fires at a target it can’t see based on radar data from another ship or aircraft. In another January test disclosed today, SM-6s from the John Paul Jones shot down five targets at record-breaking ranges using data provided from the USS Gridley via CEC.

The Navy’s ultimate goal here is what admirals call “distributed lethality.” Instead of enemies being able to focus on our aircraft carriers, they’ll have to worry about every ship in the fleet, because any ship can hurt them — and if even one US ship spots them, it can call in firepower from the rest of the fleet. Hopefully, that kind of threat will deter adversaries from attacking altogether.