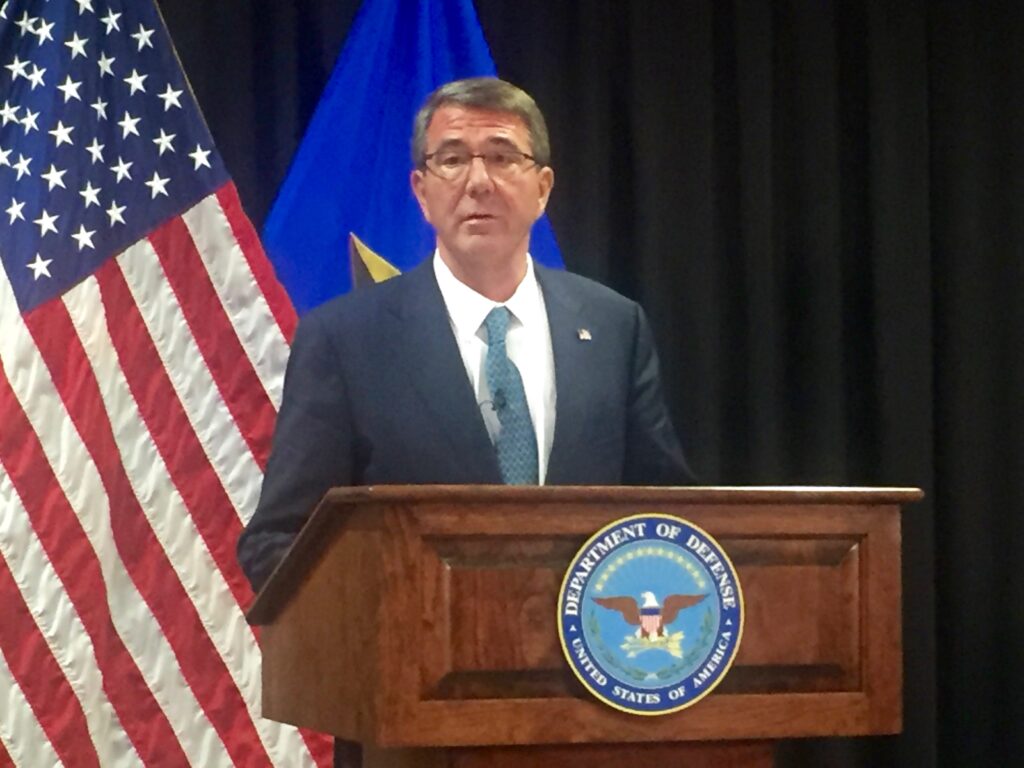 EUCOM HEADQUARTERS, STUTTGART: in a series of lightning meetings held throughout the day, Defense Secretary Ash Carter and 11 allies tried to hash out the next steps needed for dealing Daesh “a lasting defeat” in Iraq and Syria.

Carter started the day with a short address to representatives of the now-11 partners — the 11th nation, Norway, just joined the war this week. While “this fight is far from over,” he said, the coalition has “gathered momentum” in its efforts to degrade and destroy the terror group formerly known as the Islamic State in the Levant (ISIL).

It’s the third time allies have met for a Counter-ISIL ministerial. The first was in January, when French Defense Minister Minister Le Drian hosted them in Paris in late January. The first full coalition meeting was held in Brussels on February 11.

Carter, who was visibly moved when he reported the death of Navy SEAL Charles Keating in northern Iraq yesterday, mentioned him in his opening remarks as he noted how far the coalition still had to go. “That point was brought into stark relief by yesterday’s attack on (Kurdish) Peshmerga forces in northern Iraq, which unfortunately claimed the life of an American servicemember, and I know all of our thoughts and prayers are with his family during this difficult time,” he told the coalition representatives.

The 11 nations include the Five Eye countries with which America shares top-level intelligence — Australia, Canada, New Zealand, and the U.K. — as well as Denmark, France, Germany, Italy, the Netherlands, Norway and Spain. Norway was a last-minute addition to the meeting after its defense minister offered to supply special forces troops and a medical unit to the anti-Daesh coalition.

Keating was killed when Daesh mounted a powerful attack against the Peshmerga, shooting Keating several miles behind Peshmerga lines. The Petty Officer 1st class was training and advising the Peshmerga, the lightly armed but highly motivated paramilitary troops of Iraq’s semi-autonomous Kurdish provinces, who have proven some of the most effective fighters against the Islamic State.

While he would not directly state that more American soldiers will probably die as more American troops support the Iraqis and Syrians with training and logistics, Carter made clear it was likely. “This is going to be a hard but a necessary fight. We have to be realistic about that,” he told reporters at a press conference after the first round of meetings.

After Carter’s remarks, a senior defense official told reporters that reports that Keating was helping reinforce the Peshmerga after their line had been breached are not correct. They were moving from one spot to another when they basically ran into the Daesh fighters and Keating was shot. Of course, the story may change again as more information becomes available in coming days.

In terms of public support, which is crucial, a senior defense official noted that “in the last conflict support very closely tracked the number of casualties,” adding that “I think people understand now that leaving these guys alone is worse in the long run.”

As the coalition prepares for the encirclement and investment of Mosul, Carter added that the coalition must also plan to ensure Syria and Iraq get the non-military resources they need to keep Daesh defeated.

The anti-ISIL coalition will meet again in Washington this summer, Carter said. The meeting will be held in July, preceded by a meeting of senior military officials, a senior defense official told reporters after Carter’s remarks.