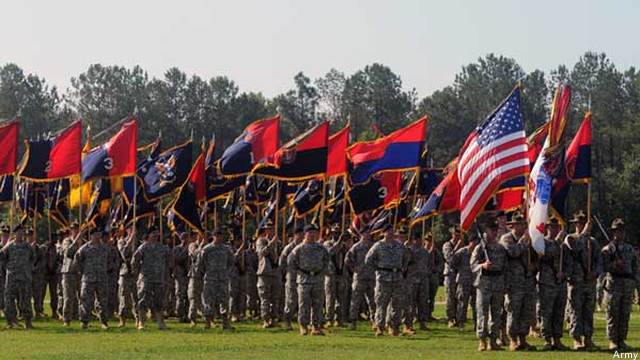 It’s budget day, so keep your eye on the cups as budgeteers move them round and round.

In real life, the Army will shrink steadily from its peak of almost 570,000 soldiers to 490,000 by 2017. But, on paper, in the Pentagon’s base budget for 2013, that shrinkage will happen overnight at the beginning of the new fiscal year.

On October 1st, 2012, some 49,700 soldiers will magically vanish from the base budget for FY 2013 and instead be funded out of “overseas contingency operations” (OCO). The official logic is that these troops are part of the buildup for Afghanistan and Iraq which the Army won’t get to keep past 2017, so they must count as temporary war-related spending. This sleight of hand allows the Army to offload some $4.1 billion from its politically sensitive base budget for FY 2013 (which totals $134.6 billion) to the less closely scrutinized OCO budget (a tidy and somewhat arbitrary $50 billion). That’s a nice gift to the hard-hit service, and it’s just the latest silver lining the Army can find in the clouds of cuts.

That said, there are still some clouds on the Army’s horizon. There’s a one-third cut — from $5.1 billion in 2012 to $3.6 billion in 2013, in politically sensitive Military Construction spending — the much-fought-over “MILCON” funds that build up bases in congressional districts. The reason is that the Army knows how many troops it’s going to shed and about how many combat brigades — at least eight, two based in Europe and six in the US — but it’s still figuring out what units go away and where. Even how individual brigades are organized is likely to change. Until that review is done, which may be months from now, the Army doesn’t know exactly where it’s going to base its smaller force, which means over a billion in on-base construction is on hold.

The Army is still building, though. One big winner is the MQ-1 “Gray Eagle” UAV, where the Army will spend about $150 million in construction and $518 million in procurement to add two companies of the drones. Army aviation programs in general continue to be winners, getting $6.3 billion of $19.6 billion in procurement dollars (counting both base budget and “OCO” war funding).

Ironically, though, most of that money pours into new buys of old aircraft, such as the CH-47 Chinook, UH-60 Black Hawk, and AH-64 Apache, while new designs for scout helicopters and sensor-laden reconnaissance planes keep getting canceled. This year, for example, sees the end of the EMARRS (Enhanced Medium-Range Surveillance System) intelligence-gathering aircraft, intended as the replacement for the Aerial Common Sensor (ACS) canceled in 2006.

On the ground, the Joint Light Tactical Vehicle (JLTV) program limps along at $72 million, while Humvee modernization has been cut out of the base budget altogether, with a residual program paid for from OCO funds. The production line for the venerable M1 Abrams tank is shutting down for good, while spending on the eight-wheel-drive Stryker continues, with $379 million to buy 58 special scout vehicles equipped with nuclear, biological, and chemical warfare sensors, which will replace the European-built Fox.