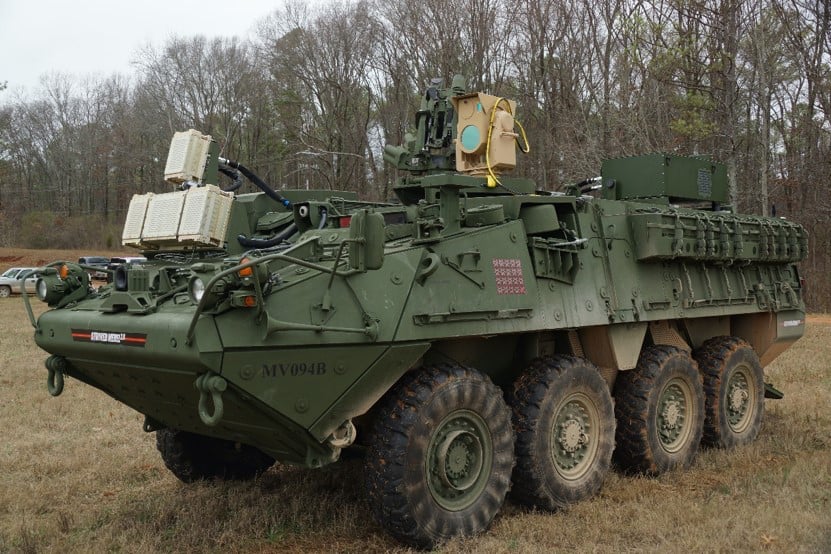 HUNTSVILLE, ALA.: The Army keeps putting more powerful lasers on smaller vehicles. Battlefield lasers in testing today can shoot down snooping quadcopters and other small drones. By the early 2020s, however vehicles mobile enough to keep up with combat brigades – Strykers and FMTV trucks – will have power in the 50 to 100 kilowatt range. That’s enough not only to kill drones in less time and at longer ranges than today, but also to stop incoming rockets, artillery shells, and mortar rounds. 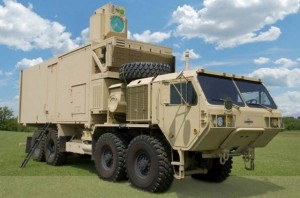 In 2021, the service will test a 50 kilowatt weapon, the Multi-Mission High Energy Laser, on a Stryker. That’s five times the power of the 10 kW laser being installed on a Stryker for testing this November – which is itself double the 5 kW laser tested on a Stryker this March and five times the 2 kW tested last year. All these lasers are compact enough that the Strykers can still carry gear and troops for other battlefield tasks (hence “multi-mission”), a big plus for combat units. The 50 kW laser is a potential candidate for the Army’s Maneuver Short-Range Air Defense (MSHORAD), effort, which needs vehicles that can move and fight alongside frontline forces. 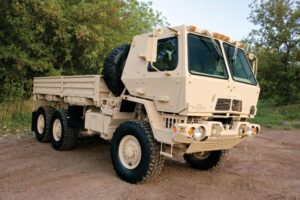 The Army is putting heavier lasers on cargo trucks. Eventually, such vehicles might be part of the Indirect Fire Protection Capability (IFPC), a truck-mounted system designed to set up behind the front line and defend large areas against incoming fire. In 2022, the Army will test a 100 kW laser on a truck, the High-Energy Laser Tactical Vehicle, based on three-axle, 10-ton FMTV. The FMTV is an unarmored support vehicle, but it’s much smaller and nimbler than the current laser truck, a four-axle, 20-ton HEMTT now being fitted for a 50-kW laser. (IFPC uses the FMTV truck as well).

For comparison, the original HEMTT-mounted laser installed in 2012 was just 10 kW. That’s same firepower that fits on the much smaller Stryker today. The power-to-weight ratio is ramping up radically.

Power matters because every time you double a laser’s output in kilowatts, you halve the time it takes to burn through a specific target at a specific distance, letting you quickly wipe out waves of incoming threats. Or you can double the power, keep the target and time to kill the same, but shoot it down 40 percent farther away. Or you can keep the time and distance the same, but burn through harder targets.

It’s not all about power, however, Aberle emphasized in a roundtable with reporters at the Space & Missile Defense Symposium here. The 100 kW laser on a truck will take a year longer than the 50 kW laser on a Stryker, he said, in large part because its beam control system is more ambitious. 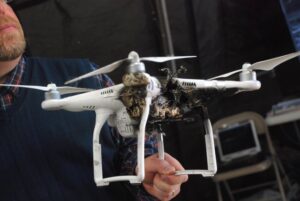 A quadcopter mini-drone downed by an Army laser in a recent test.

Beam control is about focusing a laser’s power on the target and on a specific spot on the target: A well-built laser can pinpoint a specific weak point, allowing it to have far greater effects than its power alone might indicate. Engineers also need to optimize beam quality so the laser can penetrate the atmosphere without losing power. All lasers also require sophisticated software and powerful optics, which incidentally make great telescopes for surveillance when the laser isn’t firing.

The beam control and quality equations look very different when firing from a ground level in relatively dry air, a naval craft in humid sea air, or an aircraft surrounded by turbulence in the thin upper atmosphere. That is part of the reason the services all have their own programs, though they compare notes all the time, said Aberle.

In the near term, all the services are looking at relatively low-powered defensive laser. Aircraft already use lasers to confuse the sensors of incoming surface to air missiles, while the Navy’s 30 kW laser tested in the Persian Gulf was designed to deal with drones and approaching Iranian attack boats. The near-term lasers in development can burn down dangerous but relatively fragile targets ranging from ISIL drones, to Taliban mortar rounds, to Syrian barrel bombs, to Russian artillery rockets. But in the not too distant future, increasing power and precision could take out incoming cruise missiles, helicopter gunships, and strike aircraft. At that point, modern warfare starts to change dramatically.