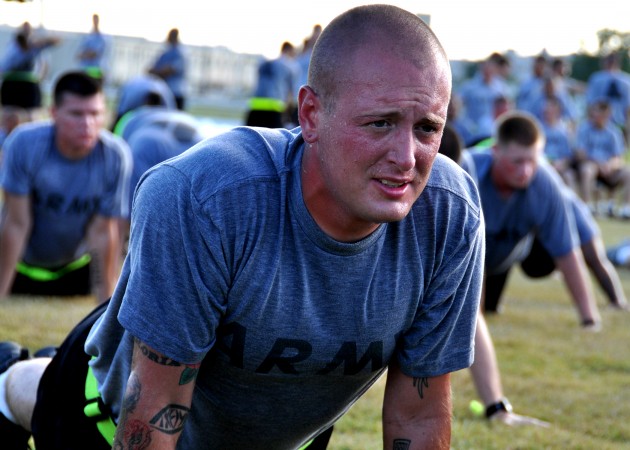 PENTAGON: The Army’s widely publicized decision to cut 10 brigade combat teams from bases in eight states is just part of the story of the incredible shrinking armed services. To start with, it’s not actually 10 brigades: It’s 11, the 10 announced this afternoon and a player to be named later. Or, if you count two brigades being eliminated at bases in Europe, an announcement made months ago, it’s 13.

In fact, the Army isn’t actually eliminating 13 entire brigades but rather disbanding 13 brigade headquarters while keeping many of their subunits. As a result, the brigade cuts account for less than half of the 80,000 regular active-duty soldiers the Army is shedding by 2017.

Most of the cuts are coming from other parts of the Army. 8,300 are simply coming from units that aren’t part of combat brigades, such as supply and transport units. Some are soldiers who don’t count as part of any unit’s official and permanent manpower. That category includes, most notably, the 22,000 of “temporary end strength increase” (TESI, pronounced “Tessy”) and 10,300 “Wartime Allowance” (WTA) personnel that Congress authorized at the height of the Iraq war, when the Army had to man many units at well above 100 percent of their official authorized strength to make up for casualties and for veterans so injured by prior tours that they were ruled medically unfit to deploy.

By cutting 32,500 soldiers not permanently assigned to any unit, the Army was able to minimize the number of units it had to cut. But that cushion is gone — and sequestration is just beginning.

The cut announced today — 10 or 11 or 13 brigades, however you count it — does not account for sequestration, Army Chief of Staff Gen. Ray Odierno and his staff repeatedly emphasized at today’s Pentagon press briefings. “If we go through a full sequestration, there’s going to be another reduction,” Odierno said.

What that reduction would be and how long it would take are still being thrashed out as part of Defense Secretary Chuck Hagel’s Strategic Choices and Management Review (SCMR, pronounced “skimmer” or “scammer” depending on the speaker’s degree of cynicism).

Already, said Odierno, “[fiscal year] ’14 is going to be very difficult with sequestration, but I can’t go any faster than I’m going,” because it takes years to get rid of personnel without breaking faith or enlistment contracts. (This is the main reason Gen. Odierno and other Pentagon leaders keep pleading with Congress to slow down, or ‘backload,’ the sequester). “I can’t really impact it until the ’15-19 budget [program],” Odierno said.

If the 10-year, $500 billion cut in defense spending known as sequestration plays out in full, as looks possible, Odierno has repeatedly said that the Army is going to have to cut up to 100,000 more troops — and not just from the regular active-duty Army, which has taken almost all the cuts so far (80,000 personnel), but also from the Army Reserve and National Guard, which have been almost entirely spared (losing only 8,000). What’s more, today’s announcements made clear that because the cushion of “temporary end strength” troops is gone, the next cut will bite much more deeply into combat units.

Indeed, the silver lining of today’s announcement is just how much of the Army’s combat forces it was able to retain. True, 13 of the Army’s 45 brigade headquarters are going away, but the 32 brigades that remain are going to be significantly bigger: They’ll grow from two “maneuver battalions” apiece (of tanks, infantry, and other frontline troops) to three, add combat engineers and a couple of artillery pieces, and generally shift from being optimized for the last decade’s static counterinsurgency operations to more mobile forms of warfare.

So as of today’s announcements — and keep in mind one more brigade is going to go away — the Army is cutting its number of brigade headquarters by 26 percent, from 45 to 33. But total personnel is only falling 14 percent, from a wartime peak of 570,000 to a 2017 target of 490,000. And the number of combat battalions, the guys at the sharpest end of the spear, is falling by only 3 percent, from 98 to 95. In short, the service is proportionately getting rid of more support troops than combat troops, more staff officers than tank gunners or infantry grunts, more chiefs than Indians.

This is exactly what many experts and some senior officials at the Pentagon have argued for much of the last 18 months should happen: cut headquarters staff and get rid of flags (command positions that have sprung up over the last 12 years).

The official breakdown of the 80,000-soldier cut:

(Note that this doesn’t quite add to 80,000; the Army has only provided rather rough rounded figures so far).

The service is also able to cancel about $400 million in military construction projects that won’t be needed by the smaller force, Odierno said.

All told, the reductions and reorganizations “will reduce the number of headquarters while sustaining as much combat capability as possible,” Gen. Odierno said. “We are increasing our tooth to tail ratio.”

But that happy trend can’t continue if sequestration does. While there’s plenty of fat to cut in any large organization, the Army included, the sequester is going to bite right through the muscle to the bone.