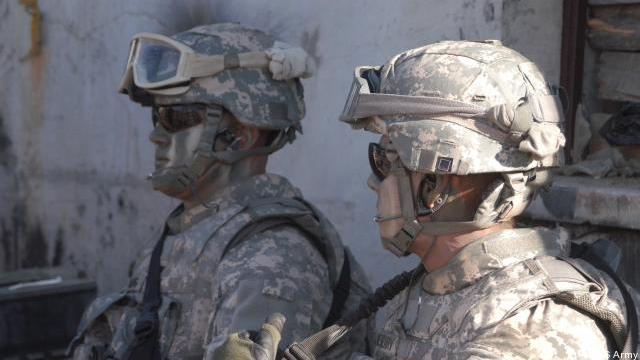 After eight years and billions of dollars, the Army has given up on an ambitious effort to clothe its soldiers in a “universal camouflage pattern.” The grey uniform, widely issued and widely loathed, was supposed to blend in equally well in all environments, from desert sand to green forest to city streets. It just didn’t. Now the Army’s going back to the old, obvious approach of having different designs for different places.

Soldiers elsewhere around the world, though, still have to make do with the universal-pattern ACU — or work around it by finding unofficial sources of uniforms. “The ACU does fine in the urban environment,” the officer said, where its grey shades blend in with concrete (see the picture). But elsewhere, he went on, “guys use the old woodland pattern” — a discontinued US uniform — “when they’re out in Thailand or the Philippines…. or they’ll trade their ACUs out with the locals.”

An article yesterday in the website The Daily called the universal camouflage a “$5 billion fiasco,” but a spokesman for the Army’s Soldier Systems Center in Natick, Mass. defended the design, given what it had attempted to achieve. “I wouldn’t characterize it as a ‘fiasco,'” David Acetta told Breaking Defense. “The UCP did have fairly good results in a number of different environments… It’s not the best for all, but it is effective to a different degree in all different climates, environments, day and night light levels.” But that jack-of-all-trades approach didn’t pan out in practice. As the Army evaluates replacements for the universal pattern, a process that should produce recommendations sometime this fall, Acetta said, “we’re looking at a family of patterns rather than just one pattern for all the uniforms.”

So the problem isn’t that the Army tried to do something simple and messed it up. It’s that the Army tried something impossibly difficult. Short of some kind of sci-fi cloaking device or invisibility field a la Predator or Star Trek — which some people are actually working on — there’s no way to come up with a single color scheme or camo pattern that blends in equally well in all environments. “In this case the desire for standardization seems to have transcended common sense,” said Loren Thompson, a defense industry consultant and analyst who often writes for Breaking Defense. “It’s obvious that a pattern working well in a jungle would not work well in most deserts.”

But when the Universal Camouflage Pattern was developed in 2003-2004, the Army was at a high point of high-tech hubris, after steamrollering the Taliban and Saddam Hussein but before realizing it was enmired in counterinsurgency. Another, far more costly Army product of the same period was the Future Combat System, which was supposed to develop a universal family of lightweight armored vehicles equally suitable for all scenarios, an ambitious and ultimately unreachable goal. The Army spent almost $20 billion on FCS before then-Defense Secretary Robert Gates canceled it in 2009, and the only tangible product was a small remote-controlled robot; at least the universal camo project produced something people could wear.

Today, by contrast, the Army is focusing its investments on more modest programs tailored to specific problems, like a more heavily armored Ground Combat Vehicle to carry infantry into urban battle zones or specific camouflage patterns for different environments. That approach still hardly guarantees the chronically troubled military acquisition system will produce quality, affordable results, but it at least sets a bar that is possible to reach.