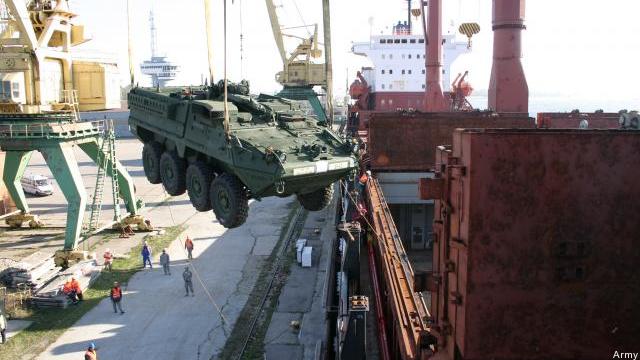 FT. LAUDERDALE: The Army is looking to the international arms market to help alleviate budget pressures back home, a number of service officials said last week.

“We have done a lot better” in terms of helping facilitate foreign military sales of Army hardware to allied forces, Kevin Fahey, program executive officer for Army combat support and combat service support, said last Thursday. Part of that effort has been looking at what exactly American allies have and don’t have in their arsenals, then trying to see what U.S. platforms — in this case combat vehicles — can fill those gaps, Fahey told reporters during the Association of the U.S. Army’s annual symposium here.

This evaluation comes as the Army is looking to clear a number of combat vehicle systems off their books. From Strykers and Bradley Fighting Vehicles to Humvees, Army leaders are looking to slim down its combat fleet as part of the service’s effort to become a smaller, more lethal force. U.S. Army Training and Doctrine Command chief Gen. Bob Cone said his office was taking “analytical responsibility” for a service-wide force structure review. Part of that review will focus on exploring what the right mix of heavy, infantry and Stryker brigade combat teams — and the number of vehicles to support them — is needed for the post-Afghanistan Army, Cone said. But its not all tactics and strategy that’s driving the effort, another Army official said. The move to shrink the Army vehicle fleet is also a case of dollars and sense.

The Army is transitioning just under 40 procurement programs — including the Stryker, Abrams tank and other vehicle programs — into their operations and maintenance accounts, Scott Davis, program executive officer for ground combat systems, said at the same event. The shift will take place over the next five years, according to the Army’s future years defense plan. While the move will alleviate budget pressure on the service’s acquisition accounts, it will “add pressure on funding claims” for its O&M coffers, Davis said. If the Army can sell some of those vehicles to partner nation forces, that may ease some of that fiscal pressure. Potential foreign sales of Army equipment would also “help bridge production gaps” on a number of combat vehicle programs, Davis said. Those bridges would be key in sustaining the various industry contractors and subcontractors that build those combat systems, he said.

The Defense and State departments have ramped up cooperation with its allies in recent years through Foreign Military Sales and international joint programs such as the F-35 Joint Strike Fighter. The Pentagon recently awarded an $835 million deal to defense giant Lockheed Martin to build F-16s for the fledgling Iraqi air force. Deals are also in the works to provide aerial drones, helicopters and cargo aircraft to several partner nations.