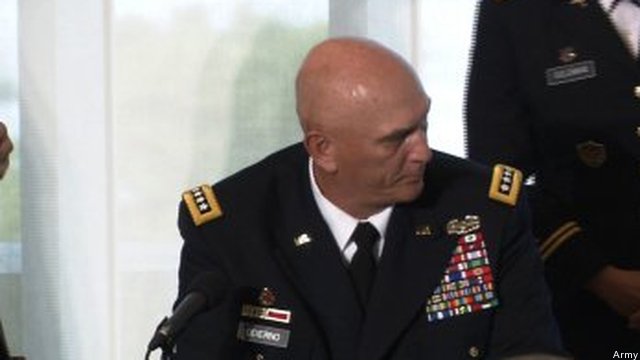 WASHINGTON: For all the budget hawks and foreign policy doves out there who think that the automatic cuts called sequestration might actually be a good way to reduce our military spending, Army Chief of Staff Ray Odierno has a message: We already gave at the office.

“I want to first remind everybody that sequestration is not the first set of cuts we have taken in the military,” Gen. Odierno told the audience at the Brooking Institution this morning (click here for video of the hour-long talk). In 2010, then-Secretary of Defense Robert Gates cancelled a host of programs — including the Army’s flagship Future Combat Systems — that would have cost, over time, an estimated $300 billion. In 2011, the Budget Control Act cut another $487 billion over ten years. “We are now just beginning to implement that almost $800 billion worth of cuts now,” said Odierno. “We’ve just begun to see the impacts.”

“Now on top of that with sequestration, we’ll take additional $500 billion worth of cuts in the Department of Defense, so we’re now up to $1.2 trillion,” Odierno continued. Add in another $100 billion that DoD needs to find in its base budget to preserve programs, like technology to defeat roadside bombs, which were paid for out of wartime supplemental funds that are going away (formally called “overseas contingency operations” funding, or OCO), the general said, “we’re now up to $1.3 trillion dollars worth of cuts.”

So the Army’s most senior officer now sees gridlock at home, not enemies abroad, as the greatest danger to the nation. “The Army has been in a state of continuous war for nearly 12 years, the longest in our nation’s history,” Odierno said, “but today, in my opinion, the greatest threat to our national security is the fiscal uncertainty resulting from the lack of predictability in the budget cycle.”

It’s not just the increasingly high probability of sequestration, he said, but the Continuing Resolution funding the government in the absence of the regular appropriations bills, which set spending at 2012 levels with little room to reflect new needs in 2013. The Army, Air Force, Navy, and Marine Corps are all already starting to cut back on spending everywhere they can.

Assuming Congress and the White House fail to fix any of the fiscal problems, Odierno said, “in fiscal year 13, the combination of a continuing resolution, a shortfall in overseas contingency operations funds for Afghanistan, and the sequester has resulted in a $17 to 18 billion shortfall to the Army’s operations and maintenance accounts as well as an additional $6 billion cut to all other programs — and all these cuts will have to be taken over the last seven months of this year.”

That means no maintenance at Army bases, said Odierno: “We’re going to be able to pay for water, heat, and that’s about it.” Congress will presumably restore the funds eventually, whenever it gets the current fiscal crisis sorted out, but as any homeowner knows, deferred maintenance is a great way to create costly problems down the road.

More troubling are the reductions in repairs of combat equipment and training of combat units. “We will always ensure our soldiers in Afghanistan or next to deploy, and our forces in Korea, are properly equipped and trained,” Odierno said. “Then we’ll see if we can continue to ensure the readiness of the Global Response Force at Fort Bragg,” where the 82nd Airborne Division traditionally keeps one parachute brigade always ready to deploy on short notice.

“We’re funding the force that’s in Afghanistan [currently] and the next one to go in, and they all go in this summer, fall. What my concern is, is the ones that come after them,” he said. “When ’14 starts… I either have to send in forces that aren’t ready or I have to extend those that are already there.”