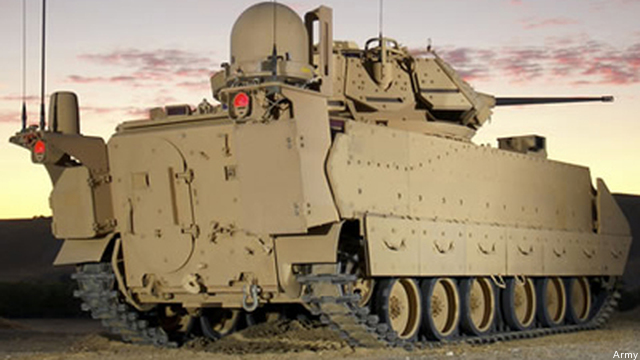 FT. LAUDERDALE: The Army’s Ground Combat Vehicle is back on schedule despite a nearly nine-month delay due to an industry protest bid, according to the top officer in charge of the effort.

The Army says it is in position to have a GCV platform in production within the next seven years, Project Manager Col. Andrew DiMarco told reporters at a briefing during a Association of the U.S. Army conference here. That plan, which calls for two to three years of testing and a four-year engineering and manufacturing development phase, is the same benchmark service leaders set for the program back in 2009. Currently program officials are conducting preliminary evaluations on a number of vehicles at the Army’s test facility in White Sands, NM, DiMarco. Those results will feed into the follow on EMD portion of the program. “It’s a good mix of [all] ends of the [vehicle] spectrum,” he said of the vehicle pool being reviewed. The Army’s recent confidence in the GCV effort is a far cry from the troubles the program endured last year.

The program was brought to a halt last August, when a industry team led by Boeing and SAIC filed a protest against the service’s decision to award General Dynamics and BAE Systems GCV development deals. The protest bid, which ended up delaying work on the program for over nine months, came less than a week after the Army issued the awards. The Government Accountability Office officially denied the protest last December. On top of that, the Army and the Pentagon had been sparring over the program’s total cost. At the time, Army estimates for the total GCV costs, including operations and maintenance, has the service spending between $11 to $13 million per vehicle, DiMarco said. Analysis done by the Pentagon’s Cost Assessment and Program Evaluation office has that number closer to $16 to $17 million per copy. A day after awarding the GCV deals, DiMarco told reporters the service would cancel the GCV if program costs exceeded the $10.5 billion per vehicle price tag.

But the delay turned out to be somewhat of a blessing in disguise, Scott Davis, program executive officer for PEO Ground Combat Systems, said at today’s briefing. By having to push back GCV development, the Army was also able to push back spending on the program. So instead of having to fight for funding in the extremely tight fiscal 2013 spending plan, Army number crunchers were able to defer those costs to later years. The result: nearly $1.3 billion in funding suddenly became available in the fiscal ’13 request.

This string of wins has given the Army some much needed optimism for the program. However, DiMarco was clear that program officials cannot afford to take their eye off the ball. The $10.5 billion fixed-price cap written into the GCV development deals will help keep the vehicle from sliding into requirements creep — or the addition of excessive requirements onto a given program. Costs may also drive the Army to adopt a modernized version of one of their current vehicles to fill the GCV requirement, DiMarco said. But that option is unlikely, since the modifications alone could cause the program’s bottom line to skyrocket.