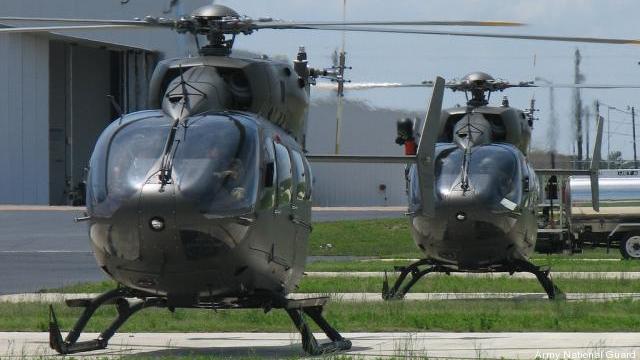 COLUMBUS, MISS: The Army’s newest addition to its helicopter fleet could soon be conducting missions for a slew of foreign militaries and agencies outside the Pentagon, according to top military and industry officials.

Three countries in Southeast Asia and the Middle East have already been in informal talks with EADS North America about procuring the newest variant of the company’s UH-72A Lakota light utility chopper, Chairman and CEO Sean O’Keefe told reporters yesterday. Tentative international sales could total out to roughly 60 aircraft among the three prospective buyers — between 10 to 20 helos per country — O’Keefe said. He would not comment on the specific countries that were eying the Lakota, but noted the helos would do everything from medical evacuation to internal security ops. His comments came before yesterday’s event commemorating the 200th Lakota to roll off the line at the company’s facility here. Military officials have been pushing hard for more foreign sales of American military hardware, especially as Pentagon budgets continue to shrink. Moving more U.S. weapon systems into the hands of partner nations will also help the service’s maintain their bottom lines, according to a senior Army officer.

Foreign sales of the Lakota, or any other piece of Army gear, will help the service keep sustainment costs low for the helo, Major General Tim Crosby, head of Army Aviation, said at the same event. It would also help maintain the manufacturing base here and at other EADS U.S. facilities and keep the UH-72A production line humming once the 300 Lakotas are delivered to the Army. The aircraft, outfitted with the new Security and Support Battalion Mission Equipment Package, will be sent to elements to the Army National Guard for humanitarian and homeland defense missions. Aside from the Guard mission, the Lakota is widely assumed to be EADS offering for the Army’s upcoming Armed Aerial Scout competition. The AAS will replace the service’s venerable Kiowa Warrior helo.

But foreign sales to partner nations are not the only options company and service officials are considering for the Lakota. Army leaders are exploring options to sell the versatile rotorcraft to other agencies within the U.S. government, according to Crosby. The helicopter’s surveillance and communications systems already make it an appealing investment and provide “a lot of other opportunities with other [U.S.] agencies,” Crosby said. The helo’s inherent surveillance and communication capabilities make it an attractive investment for foreign and domestic agencies and organizations, according to the two-star general. That said, the Army may procure additional Lakotas beyond the 300 already being bought, Crosby said. But that will all depend on whether the service’s maintenance accounts can absorb the cost of those new aircraft, given the Army’s current budget woes. The UH-72A “is very versatile” Crosby said, but “can you sustain it and keep it viable” over the long term.