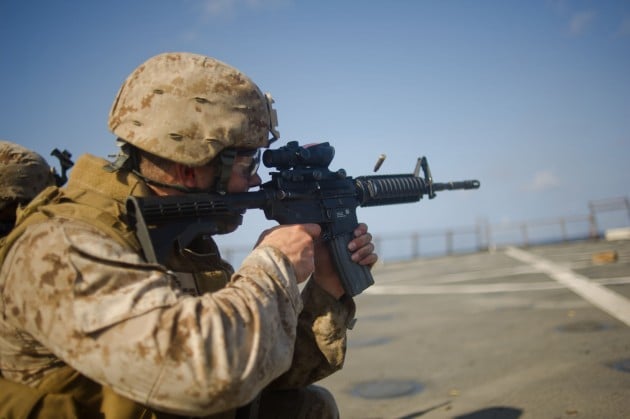 “Everybody loses, go home”: That’s what the US Army told the six gunmakers competing to build a new Individual Carbine to replace the widely used M4, itself a derivative of the venerable M16. Of course, it would have helped if the Army had told the competitors the right kind of ammo to fire (more on that little wrinkle below). [Updated: The Army insisted Friday morning that it told industry more than a year ahead of time, although industry sources say they weren’t given enough ammunition to test with.] But Army leaders were unenthused about the program anyway, and in a tight budget environment, there are plenty of other priorities clamoring for the money.

By declaring that none of the offerings deserved to proceed to the next phase of testing (phase III), the Army’s decision effectively kills the $1.8 billion Individual Carbine program before Congress could enact language requiring the service to proceed. The top Democrat on the House Armed Services Committee, California’s Loretta Sanchez, had introduced an amendment ordering the Army not to cancel the carbine program before it completed the next phase, and the full HASC had approved the Sanchez amendment as part of the National Defense Authorization Act (NDAA) for fiscal 2014, but the bill is months away from final passage into law. (We’ll update with comment from Rep. Sanchez when we get it).

Cancelling the Individual Carbine also makes it the second M4/M16 replacement to bite the dust in less than a decade, following the XM-8 cancelled in 2005. (In that case the Army botched the competition by not having one at all, bypassing Pentagon procurement procedures to give a sole-source award to Heckler & Koch). A third weapon, the XM25 – a futuristic brute of a gun that launches, in essence, precision-guided mini-grenades – has been field-tested in small numbers in Afghanistan but never came close to becoming the Army’s new general-issue “objective individual combat weapon” as intended.

No wonder that industry sources sounded profoundly frustrated on the phone with me this afternoon. Companies “risk a lot of money trying to build prototypes,” said retired Maj. Gen. Allen Youngman, executive director of the Defense Small Arms Advisory Council (DSAAC). (There’s not exactly a big consumer market for assault rifles, after all: If the military doesn’t buy it, you’re stuck pitching to SWAT teams and foreign forces). “We’re  long past the point where an Anglican priest can go in his back room and develop the percussion cap, or Sam Colt could go into a stable and build a prototype of a revolver,” he said. “Now we’re talking about very capital-intensive things.”

There is certainly an argument to be made for just upgrading the generally satisfactory M4/M16 family instead of replacing them with something different – “frankly, they’re pretty darn good,” said Youngman – and the industry is happy to support either path. The Army just needs to tell the gunmakers what it wants already.

“The industry is ready to support the army if they’re looking for a new technology,” Youngman said, “[but] if there is a need somewhere in the Army for a new capability, we apparently missed the last two opportunities to communicate that fact to industry.”

What’s particularly weird is how the Army explained its decision to reject all the competitors. “None of the carbines evaluated during the testing phase of the competition met the minimum scoring requirement,” goes the official press release issued this afternoon, because “no competitor demonstrated a significant improvement in weapon reliability— measured by mean rounds fired between weapon stoppage.” In other words, the key measure is how many shots each gun can fire, on average, before it jams, as compared to the existing M4. But, the release goes on, the competitors’ poor performance may have been because the Army told the contractors to use the wrong ammunition:

“Based upon Army analysis, test results may have been affected by interaction between the ammunition, the magazine and the weapon. The Army’s existing carbine requirement assumed use of the M855 ammunition; the weapons tested in the IC competition all fired the next generation M855A1 Enhanced Performance Round (EPR) currently in fielding.  The use of the M855A1 round likely resulted in lower than expected reliability performance.  These effects are unique to testing conditions and are not known to affect the reliability of any weapon in the operational environment.”

In other words, the Army asked industry for weapons that could fire a particular kind of bullet, and industry provided them as requested – only for the Army to test-fire them with a different kind of bullet. No wonder they kept jamming.

Yes, any gun that fires the M855 should be also be able to fire the M855A1, which is  “enhanced” because it is better at penetrating hard materials – walls, steel, rigid body armor – but has the same weight, size, and ballistic properties. (The A1 round also contains no lead, making environmental clean-up easier at training ranges). But they’re not identical: for one thing, the enhanced round is fired with a higher pressure in the chamber. (Click here to read an Army brief comparing the M855 and M855A1 rounds). The differences are subtle, but when you’re comparing how often various weapons jam over hundreds of test firings, subtle differences add up. As the Army itself seems to admit, that could potentially invalidate the results.

It’s not clear why the Army didn’t just tell the contractors to optimize their designs for the enhanced round: The draft request for proposals for the Improved Carbine came out in January 2011, when the M855A1 was already in service. It’s also not clear how easy it would be for the gunmakers to redesign their offerings for the correct round: We’ll be asking the Army about that in their conference call with journalists tomorrow. [Updated: The Army said this morning it told the gunmakers they would have to use the new round back in fall 2010, more than 18 months before the tests. Industry sources, however, argue they had insufficient access to the new rounds to test their designs before they had to submit them].

It may well be that the Army is better off cutting its losses on the Individual Carbine. In March, the Pentagon’s Principal Deputy Inspector General, Lynne Halbrooks, testified to Congress that “key performance parameters such as accuracy, reliability, and lethality have not been established. In addition, it is unclear what additional capability this new rifle will have over the modified M4.”

To small arms veterans, that sounds an awful lot like the problems that killed the XM8 eight years ago. “It’s like they got the talking points from 2005 when they pulled the plug on the XM8 program and just updated the numbers and the dates,” lamented Youngman. “If you don’t have a valid requirement, why are you doing this?”

Gunmakers could certainly build a weapon very different from the M4 and M16, if asked: a bigger bullet for more stopping power (at the price of being able to carry less ammunition), for example, or a more compact “bullpup” design that’s easier to fire out of vehicles or in close quarters (at the price of potential problems with trigger pull and ejection of spent cartridges).  But that’s not what the Army told the competitors to do.

So far, unfortunately, the Individual Carbine looks like another example, albeit in miniature, of the Army’s chronic procurement problems. While other services have had troubled and over-budget programs – the Navy Littoral Combat Ship, the Air Force F-22 stealth fighter, the Marine V-22 Osprey, the tri-service Joint Strike Fighter – they generally bull ahead, fix what they can, and end up with something they can use, even if it didn’t meet the original promises (usually wildly overoptimistic) for high performance and low price. The Army, however, has had a string of programs large and small where it invested millions, even billions, and got nothing: the Future Combat Systems (a mix of manned vehicles, robots, and networks), the Comanche and Arapaho scout helicopters, the Crusader artillery vehicle, the XM8 rifle – and now, it seems, the Individual Carbine.