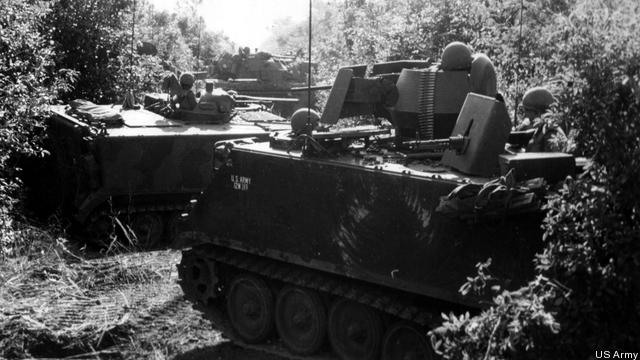 WASHINGTON: On the margins of the $550-plus billion defense budget, the Army and the defense industry are quietly working on a program that could potentially replace 3,000 geriatric armored vehicles. So far, in this year’s budget, Congress is going along, but the real money — and the real battle — loom in the years to come.

The $1.7 billion Armored Multi-Purpose Vehicle (AMPV) program is the Army’s blandly named initiative to replace the M113, an all-too-lightly armored transport — sometimes called a “battle taxi” — that first entered service in 1961. Over 3,000 M113 variants serve in a host of unglamorous but essential roles from troop carriers to armored ambulances to mobile command posts.

The boxy M113 did yeoman’s work in the highlands of Vietnam, especially an up-gunned version bristling with machineguns called the ACAV, Armored Cavalry Assault Vehicle (pictured). Even in the sixties, though, M113s were so vulnerable to Viet Cong mines that some troops took to riding on top of the vehicle, rather than inside, in the hopes of putting an extra layer of protection between themselves and the blast. In the eighties, the better armed and armored M2 Bradley replaced the M113 as the front-line infantry transport, while the M113 was relegated to rear-area roles — but the post-9/11 wars have revealed just how vulnerable those support units can be.

America’s first Medal of Honor recipient for the Iraq war, an Army engineer named Paul Ray Smith, died in his M113 because he had to expose half his body outside the vehicle’s armor in order to fire its machinegun. That particular flaw might not be hard to fix: The Army has retrofitted “weapons stations” remotely controlled from safely inside the armored crew compartment on vehicles as small as the Humvee. But there are tight limits on how much armor the M113 can carry, especially to protect its low-slung underbody against roadside bombs. In Iraq, as the threat increased, Army units largely kept their M113s parked back at base and ventured out in MRAPs instead.

But the truck-like MRAPs can’t carry much, and most variants are painfully ungainly off paved roads. The Army wants something more versatile. In particular, as the Army moves away from relatively static counter-insurgency operations to contemplating more mobile warfare against a wide range of adversaries, its official requirements call for the AMPV to have off-road mobility comparable to the M1 Abrams tank and the M2 Bradley, something no MRAP variant can attain.

Until 2009, replacing the M113s was to be just one of the many problems solved by the Future Combat Systems program. FCS was supposed to field a family of light-weight armored vehicles in eight variants ranging from a mini-tank to an armored ambulance. But after years of growing cost and weight, the vehicles were cancelled by then-Secretary of Defense Robert Gates, who considered them still too vulnerable to roadside bombs. Since then, most attention — and money — has focused on the Army’s effort to go back to the drawing board to replace the frontline fighting elements of FCS, which have evolved into the Ground Combat Vehicle, for which BAE and General Dynamics are now developing prototypes. The AMPV effort to replace the workhorse M113s in all their variants is still a step behind.

BAE has offered a stripped down version of its M2 Bradley, without the turret and heavy weapons, which would obviously meet the requirement to keep up with existing M2s. General Dynamics’ eight-wheel drive Stryker is less mobile offroad than the Bradleys (though better than MRAPs), but it has the advantage that it’s already being produced in multiple variants, from troop carrier to command post to ambulance, for the Army’s Stryker units, with $318 million for 58 new Strykers in this year’s budget. The Army is currently conducting an “analysis of alternatives” looking at these and other options, due to report back in June. A formal Request For Proposals from industry may come as early as the first quarter of 2013. The Army originally planned to start production in 2017, but it’s hopeful it could begin buying the vehicles in bulk in 2015 if it can find an off-the-shelf design — like the Stryker or a modified Bradley — to meet its needs at $1 million to $1.7 million per vehicle.

So far AMPV is a study project, a relatively modest $74 million in the fiscal year 2013 budget. Both the House of Representative and the Senate Armed Services Committee have fully funded this request in their respective versions of the annual defense spending bill, as have the House appropriators, although the Senate appropriators and the full Senate have yet to vote.

The Pentagon’s five-year spending plan, however, calls for $116 million in 2014, $313 million in 2015, and a total of $1.7 billion through 2017, when full-rate production is supposed to begin. What’s more, the Army got OSD approval in April to explore accelerating the start of production — and the attendant ramp-up in costs — to 2015. Buying a Bradley variant in particular would enjoy political support in Congress, which is fighting to keep the Bradley production line in York, Pennsylvania from shutting down. But, sequestration or not, budgets are growing ever tighter, and investment is increasingly shifting from the ground forces that have fought so hard since 9/11 to the air- and sea-power that would be central against Iran or China. The Army will have to fight to make its case.