Posted by Richard Whittle on January 9, 2013 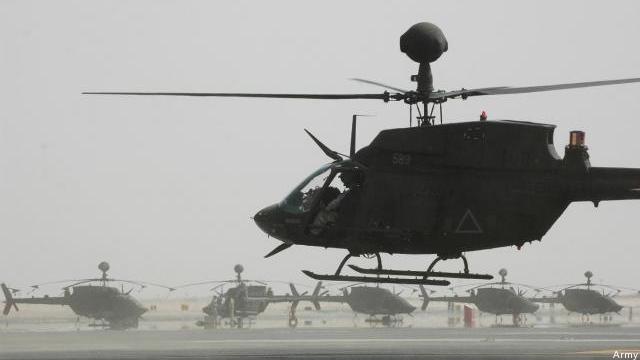 WASHINGTON: Army aviation leaders thought they had a plan to start developing a new Armed Aerial Scout all teed up for the vice chief of staff’s approval last month. But Gen. Lloyd Austin III said, “no.”

It was the latest twist in a 21-year (and counting) saga to replace the Army’s aging OH-58D Kiowa Warriors, a Vietnam-vintage design. The interminable effort to build a new reconnaissance helicopter has started to resemble the legendary quest for the Holy Grail.

“We went to the vice chief of staff the week before Christmas, and we got sent back with more homework to do,” said Col. John Lynch, capability manager for reconnaissance and attack with the Army’s Training and Doctrine Command (TRADOC). “We were expecting to get a decision from the vice but we did not,” Lynch told a Boeing Co. media brunch on the eve of the Association of the annual Army Aviation Symposium, hosted by the Association of the US Army this Thursday and Friday.

The trick, Lynch said, is finding the right balance among the three main imperatives: schedule, capability and cost. “It’s an affordability question for the Army,” he said.

What is clearly the service’s most urgent and difficult aviation decision will be a major topic at AUSA’s symposium, where members and guests can hear talks and panel discussions featuring Army and industry leaders on topics such as “Aviation in the Fight: At Home and Down Range” and “Technology Development: Now, Pending, Future” – all crucial context for the Armed Aerial Scout decision. Among the speakers will be several of the senior officers who went to the vice chief asking Army leadership’s permission to go to the Pentagon’s top acquisition official, Under Secretary Frank Kendall, whose blessing is required to start a new Armed Aerial Scout program.

The central issue is whether to extend the service life of the Kiowa Warrior one more time or buy a completely new aircraft. “It is the question,” Lynch said. “Our recommendation is that we wanted to go forward and hold a competition.”

The program being discussed is expected to add in the neighborhood of $8 billion to Army aviation acquisition spending over the next 20 years or so to acquire up to 368 vertical takeoff and landing aircraft with far more speed, range, endurance and other capabilities than the Kiowa Warrior offers. Kendall told the Army last year it could set a price of $13 million to $15 million per aircraft as a goal.

Taking the issue to the vice chief probably seemed long past due for those involved. Army aviation leaders have been trying for two decades to replace their Bell Helicopter Textron Inc. OH-58s, only to have two replacement programs collapse in the last decade: the RAH-66 Comanche, an ambitious attempt to build a high-tech stealth helicopter, cancelled in 2004, and the ARH-70A Arapaho, a modest off-the-shelf design whose costs still spiralled out of control, cancelled in 2008.

Praying the third time would be the charm, the Army invited contractors to voluntary flight demonstrations last year to see what industry now has to offer. The timing, however, could hardly have been worse. The meeting was held Dec. 17, as President Obama and House Speaker John Boehner were still speeding toward the fiscal cliff like Thelma and Louise.

“The aviation community was rather foolhardy to think that they were going to get a decision out of any vice chief with the economic situation facing the nation and the uncertainty of defense spending up for grabs,” said an industry source who follows Army aviation issues closely.

Instead, Austin told his aviators to report back to him later on what they learned from the flight demonstrations last summer and fall, in which five manufacturers flew set maneuvers with helicopters they might offer to replace the Kiowa Warrior while Sikorsky Aircraft Corp. briefed Army experts on their proposed (but as yet unbuilt) S-97 Raider. “He wanted a lot of detail,” Lynch told the Boeing brunch.

Austin also asked for more data on how the increasing capabilities of unmanned aerial systems (UAS, aka UAVs, aka drones) and the ability to team them in flight with manned aircraft might affect the number of Armed Aerial Scouts the Army needs. The answers, Lynch said, will be drawn partly from studying a recent deployment to Afghanistan of the 101st Airborne Division’s 2nd Squadron, 17th Cavalry, the service’s first Full Spectrum Combat Aviation Brigade, as mixed manned/unmanned units are called. Instead of 30 Kiowa Warriors, the “2-17” deployed with 21 OH-58Ds – three troops of seven Kiowa Warriors each — and two platoons of four RQ-7 Shadow UAS apiece. (The Shadow is a small drone, about 350 lbs. gross weight, that carries only a video camera, no weapons).

Aviation leaders will probably report back to the vice chief later this month, Lynch said. He noted, though, that the final decision isn’t likely to be made by Austin, who was nominated Dec. 6 to take over US Central Command and is expected to vacate his current job in February. His successor as vice chief has yet to be named.

Even if whoever that is agrees with the Army aviators that a new program to develop an Armed Aerial Scout is warranted, figuring out how to pay for it won’t be easy. During an Army-wide “portfolio review” the day after he played Lucy to the aviation community’s Charlie Brown on their Armed Aerial Scout request, Austin told the aviators any such program would need to be funded out of the existing aviation budget, the industry source said.

Assuming the defense budget escapes draconian cuts once the current, short-term sequestration fix expires in March — which is no sure thing — the Army aviation acquisition budget total just over $6 billion a year. Two-thirds of it, moreover, is already committed to multiyear contracts to buy Boeing AH-64 attack helicopters, Boeing CH-47 Chinook transports (another Vietnam-era design), and Sikorsky UH-60 Black Hawks. So there doesn’t figure to be much left over for an Armed Aerial Scout.

The quest for the Holy Grail, however, continues.