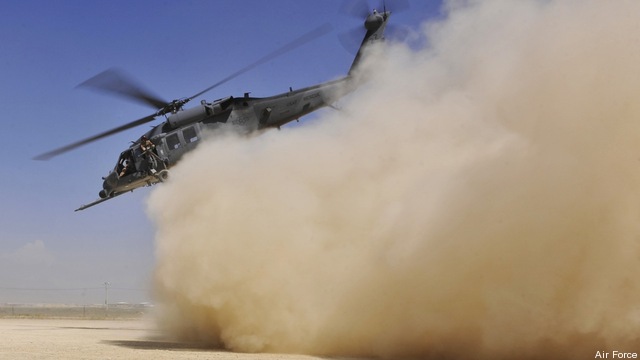 The Army will test a new system designed to lessen the worst danger military helicopter crews and their passengers have faced during the wars in Iraq and Afghanistan — blinding sand, dust or snow that can cause pilots to get disoriented and crash.

Sierra Nevada Corp. thinks its Helicopter Autonomous Landing System (HALS), which the Army will test in five UH-60L Black Hawk helicopters in Afghanistan for a year, may be a giant step toward conquering what’s often called “brownout,” but is more technically known as Degraded Visual Environment, or DVE.

Often, but not always, a product of sand, dust or snow kicked up by a helicopter’s own rotors, DVE has claimed more military aircraft and lives than enemy fire since 2001, as many experts interpret available statistics. Even so, it’s a hazard the armed services and the Defense Department haven’t yet come to grips with.

“The dangers of DVE have been known for as long as helicopters have flown in sand, dust and snow,” said Michael Hirschberg, executive director of the American Helicopter Society International. “Brownout has been a significant contributor to the losses of some 600 Americans and 400 vertical flight aircraft in the past 10 years of conflict — much deadlier than enemy actions. But even after all this, there still aren’t any technologies that are mature enough to field. The Pentagon is late-to-need on the technologies to close this critical gap.”

Patrick Garman, a former Army attack helicopter pilot who’s ramrodded development of the HALS for Sierra Nevada over the last six years, thinks his company may have the solution. The HALS is “a generational leap in system and sensor technology,” Garman boasts.

To see through airborne particulates, or just through darkness, the HALS uses a 94 GHz radar – a frequency whose range may be limited in rain or wet snow but is “basically unaffected” by smoke, fog, dust, sand or dry snow, according to Garman. The radar’s 30-degree horizontal by 30-degree vertical field of view is fused with digital terrain maps the Pentagon maintains and satellite imagery so that a screen inside the cockpit displays a 60-degree by 60-degree 3D color image of the world outside and its hazards, right down to obstacles as small as a foot in size.

Coupled with a BrownOut Symbology System still being developed by the Army that overlays atop the display screen image vital data such as speed, altitude, wind direction and even guidance on the best flight control commands, the HALS will allow pilots whose vision outside the cockpit is blocked to, “in essence operate just like they do during the day,” Garman predicts.

That could be life-saving in many cases, for a helicopter pilot suddenly confronted with a blinding cloud of particulates while taking off, landing or just flying close to the ground faces a more daunting dilemma than an airplane pilot flying through clouds at 35,000 feet, Garman said.

Engulfed in this swirl, a pilot’s eyes and inner ear can confuse him as to where the ground is, whether the aircraft is level and whether it’s drifting toward an obstacle.

Naval Air Systems Command test pilot and former Marine Corps colonel Christopher Becker puts it this way: “You’ve momentarily lost control of your destiny.” When that happens, Becker said, “The best-case scenario is, if you have the power, you can wave off and take it around. But if you’re in a hostile environment, time critical or max gross weight and you don’t have that capability, you’re going to suck it up and ride it out and hope that everything turns out okay.”

Often it doesn’t. According to a 2009 Defense Department study tracking rotorcraft losses whose statistics are kept current by experts who follow the issue, more than 80 percent of the helicopters lost in Iraq and Afghanistan have gone down in accidents, most of them from brownout or the broader category of Controlled Flight Into Terrain, or CFIT (pronounced “see-fit”). Hostile fire has brought down fewer than 20 percent of the rotorcraft lost.

The Army’s Aviation Applied Technology Directorate plans to give service leaders and the media a look at Sierra Nevada’s HALS in a series of flight demonstrations this April and May at Huntsville, Ala., and in Virginia at Fort Eustis and Fort Belvoir. The UH-60L used for those flights won’t fly in actual brownout but will be fitted with a special screen to black out the test pilot’s side of the helicopter to simulate DVE. A safety pilot with a normal view out the windscreen will fly along in the copilot’s seat as the test pilot uses the HALS to fly.

Then Black Hawks will try out the HALS in Afghanistan beginning in the summer of 2013. They are being equipped with it in response to an Operational Needs Statement issued after Army brigade commanders last year discussed how often their helicopters were unable to fly because of brownout conditions, including sandstorms, and how the enemy clearly tried to exploit that, Garman said. Sierra Nevada will need a year to turn the prototype HALS it’s been testing into something smaller and resembling a finished product. They will attach the 94 GHz radars to the noses of the Black Hawks in an aerodynamic fairing, install display screens in their cockpits, develop manuals for mechanics and train air crews to use the system.

The senior Pentagon leadership and the armed services, meanwhile, have largely gone their separate ways on this issue, groping around for their own solutions. The services have examined and continue to study a range of systems other than the HALS that use sensors to see through brownout, from different types of radar to LADAR (radar that uses laser light instead of radio waves) and infrared imagery, often coupled with digital maps and symbology to guide a pilot in DVE.

Pentagon safety experts and the Army don’t agree on how to define DVE and CFIT or which is the primary problem, much less what technologies to pursue.

Joseph Angello, executive secretary of the Defense Safety Oversight Council, and council expert Peter Mapes, a retired Air Force colonel and physician, said CFIT at cruising speed – crashes into terrain or obstacles such as towers and wires – has killed 20 times more U.S. military personnel than brownout. Their definition of CFIT, though, includes some types of crashes whose causes the Army categorizes as DVE.

Brownout or whiteout are terms that historically have referred only to blinding conditions caused by “particulates entrained in the rotor wash of a hovering helicopter,” Angello argued, while sandstorms, which the Army includes in the definition of DVE, are more properly classified as an “environmental condition.” Moreover, he added, while brownout and whiteout accounted for most military helicopter losses from 1985 through 2003, such crashes caused relatively few casualties because “the mishaps occurred at low velocity and low altitude.”

Angello added that “training and experience” have “significantly diminished” the number of DVE losses in Iraq and Afghanistan in recent years.

Other experts don’t dispute the latter assertion. Combat pilots have indeed reduced losses from DVE through better tactics, techniques and procedures – TTPs, in military parlance – that help minimize how badly brownout affects the pilot’s ability to land. In Iraq and Afghanistan, where sand and dust have been major problems, pilots have learned to make what resemble roll-on landings, in which the helicopter continues to move forward until its wheels touch ground, keeping dust behind the machine as it lands.

Based on its own analysis of the problem, Angello’s office has been pushing the services to install in their helicopters commercially available Helicopter Terrain Awareness Warning Systems (HTAWS), which issue visual and audio warnings if an aircraft is in danger of striking terrain.

“In my opinion and the official Army opinion, that would be a completely unsuitable and perhaps unsafe solution,” Layne Merritt, assistant program executive officer for engineering and technology for the Army’s aviation branch at Redstone Arsenal, Ala., said of the HTAWS idea.

HTAWS rely on digital map databases, Merritt said, but Army helicopters often fly in combat zones whose features haven’t been mapped. Army helicopters also fly close to the ground for the most part, which would likely result in constant useless warnings from a HTAWS, he said.

After studying the records of all military helicopter losses in great detail, the Army also disputes the safety council’s conclusion that CFIT is the greatest cause of accidents, Merritt said.
“Our conclusions are that operating in degraded visual environment is the top killer of (Army) aircraft and people,” Merritt said. “There is not a simple solution, however. Most solutions that you’ll hear about, including the HALS, focus on an active sensor, in their case a 94 GHz radar. That’s not the only thing that would solve the problem, or help solve the problem.”

Better symbology, which the Army Aeroflightdynamics Directorate in California is developing, and improved computerized flight controls to improve the handling qualities of military helicopters and reduce a pilot’s workload are generally seen by service experts as part of the solution.

“A single DVE mitigation technology alone is not going provide as effective results as a DVE system would,” said Ed McDaniel, who works on the problem at the Naval Aviation Center for Rotorcraft Advancement at Patuxent River Naval Air Station, Md. “To have the optimum system, you need a sensor, better displays with symbology, and better aircraft handling qualities. Everybody seems to be working in separate lanes, but it would better to eventually combine all three.”

Merritt, who’s in charge of an overarching Army effort to come up with a strategy for dealing with DVE, said Sierra Nevada’s HALS was chosen for the test in Afghanistan because it “was what we judged to be the most mature bang for the buck,” but DVE is “a multi-faceted issue” and the Army has budgeted $256 million for research on it through fiscal 2016.

“We’re going to take advantage of efforts and products that come from different (sources),” Merritt said. “I do not foresee us starting a big program simply to provide DVE capability.”