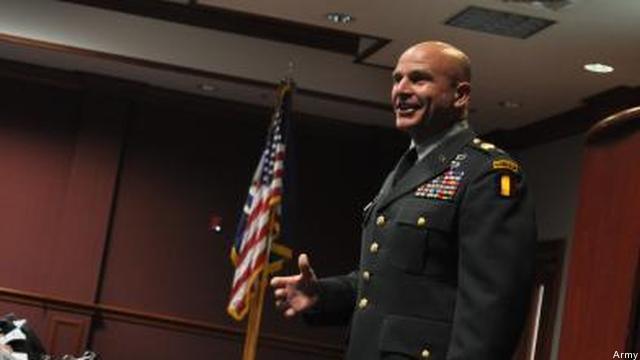 [UPDATED 6:30 pm] HUNTSVILLE, ALA.: The ever-beleaguered Army has a reputation — not undeserved — for being bland, conformist, and bureaucratic, an organization where brilliant mavericks are forced to retire at colonel and the guys who make general don’t rock the boat. Just ask any of the long-serving and long-suffering officers convening here in Huntsville, home of the massive Army Materiel Command, for the Association of the US Army’s annual winter conference.

But it looks like 12 years of war and three years of budget chaos may be able to shake things up. One sign of the times is that the Army plans to promote two generals who are smart guys with enemies.

H.R. McMaster is the most notorious name here, and we’ll get to him — but let’s take the less famous one first: Maj. Gen. (soon to be Lt. Gen.) Kevin Mangum. A helicopter pilot who once commanded the 160th SOAR, the Army’s elite Special Operations Aviation Regiment. Since 2011 he’s headed the Army’s aviation center at Fort Rucker, Alabama, the central temple to which all Army helicopter personnel return again and again throughout their careers.

In recent months, however, Mangum has had the unglamorous and grueling job of making the case for major cuts. As the high priest of the cash-strapped Army aviation community, he’s had to sell his flock on a 2015 budget plan — one still awaiting White House approval and certain to face a fight on Capitol Hill — that would retire almost 900 helicopters over the next five years.

That includes the entire fleet of OH-58 Kiowas, a venerable armed reconnaissance machine that the Army just can’t afford to replace. To fill the resulting holes in regular active-duty scout units, the plan also calls for stripping the Army National Guard of all its AH-64 Apache attack helicopters. The two moves together leave the Guard with no combat helicopters — only transports — and a big grudge against the active-duty officers who authored the plan, including Mangum.

It’s a time-honored rule in Washington that angering the National Guard and its allies is a bad career move. But Mangum is getting his third star and ascending even higher in the Army’s doctrinal priesthood, formally known as the Training and Doctrine Command (TRADOC), where he’ll be a deputy commanding general and the chief of staff.

Then there’s H.R. McMaster. A blunt-spoken bulldog of a man who made his name as both a scholar and practitioner of counterinsurgency in Iraq, McMaster long looked like the classic Army maverick who did well on the battlefield but made too many enemies to rise past the rank of colonel. After McMaster was passed over for brigadier general twice in a row — normally the death knell for an Army career — getting him his first star required action from the arch-counterinsurgent, Gen. David Petraeus.

Petreaus’s own star has fallen since with his resignation from CIA. And there’s lots of talk in national security circles that his “COINista” followers are following him, now that we’re done with messy guerrilla wars forever for the umpteenth time and get to focus on a proper high-tech enemy like the Soviet U — excuse me, China.

But this will be McMaster’s third star in less than six years. That’s a remarkable rate of ascent. As a major general, McMaster is currently commander of the Army’s Maneuver Center of Excellence at Fort Benning, Ga, which is holy ground for infantrymen and tankers just as Rucker is for Army aviators. As a lieutenant general, he will be TRADOC’s deputy commanding general for futures, in charge of something called the Army Capabilities Integration Center (ARCIC).

In English, ARCIC is the Army organization tasked to think full-time about the next war and how to win it. So McMaster’s new position makes him point man for the entire Army as the service struggles to figure out its post-2014 role. What’s more, he takes that mission at a time when both the Army’s budget and its case for strategic relevance are coming under intense assault. If there was ever a time the Army needed a bare-knuckle intellectual like McMaster in the job, the time is now.

[UPDATE – 6:30 pm: It seems some readers took this article as an insult to H.R. McMaster because I said he was twice passed over for promotion to brigadier general and implied he wouldn’t ever have been promoted without Petraeus’s intervention. Quite the contrary: I am insulting the promotion boards for not making him a general until Petraeus arrived to smack some sense into them. If you are a fan of H.R. McMaster, as I am, you should not be offended by this article. If you’re an Army personnel system bureaucrat, you probably should be.]