Army To Congress: If You Can’t Stop Sequester, At Least Slow It Down 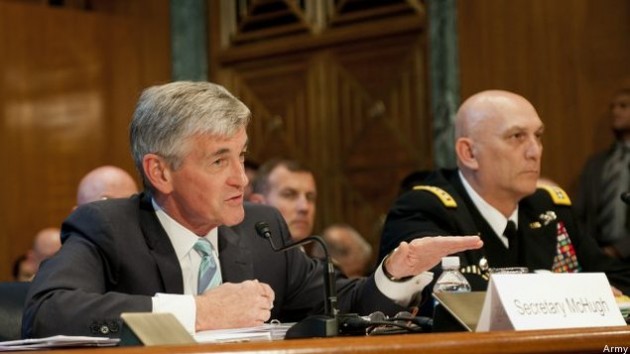 CAPITOL HILL: “Speed kills.” It looks as if the Pentagon may well adopt that old highway-safety slogan as its new strategy to combat the so-called sequester, which will cut $500 billion from the defense budget over the next decade unless the White House and Congress can reach the ever-elusive “grand bargain” to reduce the deficit by other means. Commentators — myself included — have derided President Obama’s 2014 defense budget, released this month, for assuming sequestration somehow goes away. But while most discussion focuses on the sheer size of the cuts, the Army’s top two officials emphasized their timing in testimony today to the Senate Armed Services Committee. Rather than reduce the defense budget evenly by about $50 billion in each of the next decade, argued Army Secretary John McHugh, the cuts should be “backloaded into later fiscal years.”

This morning’s wide-ranging hearing on the Army budget ranged across subjects from homestate bases to overseas crises. In particular, the service’s Chief of Staff, Gen. Ray Odierno, made sure to emphasize that 60,000 Army soldiers are still in harm’s way in Afghanistan. He also suggested keeping 8,000 to 9,000 US troops there — to hunt terrorists and to advise and support the Afghan force — after regular combat forces are withdrawn in 2014. He was careful to defer to the commander in-country, Marine Gen. Joseph Dunford, to make the final recommendation to President Obama. (Dunford’s boss, Central Command chief Gen. James Mattis, recommended a 13,600-strong residual force last month). “What we have to watch is the confidence of the Afghan security forces,” Odierno said. “We think they’re ready,” he went on, but while they are fierce fighters, the Afghans remain painfully short on key “enablers,” from air support to medical care to logistics, all currently provided by the US.

But the budget wars in Washington overshadowed the literal war abroad during the hearing. In fiscal 2013 alone — which ends in just five months — sequestration hits the Army for $7.6 billion, said Secretary McHugh. Add in another $7.8 billion in greater-than-expected wartime expenses not covered by the current Overseas Contingency Operations (OCO) fund, and that puts service $15.4 billion in the hole. One of the short-term sacrifices the Army has made to save money, Gen. Odierno said, was cutting training for combat brigades not specifically committed to Afghanistan. That, he added pointedly, reduces the Army’s ability to respond to a crisis elsewhere — say, Korea.

In the longer term, said Odierno, “it really puts into question our ability to deter potential future conflict.” The Army already is set to shrink to 490,00 troops, barely enough to cover Pentagon plans for one “major theater war,” said Odierno, and fully implementing the $50 billion a year reduction would require cutting another 100,000. If that happens, Odierno said, “we now put into question our ability to respond to large-scale major contingencies.” (The Commandant of the Marine Corps, Gen. James Amos, made the same point in starker terms last week).

The ideal, Odierno said, would be to “avert sequestration” altogether. That’s what the president’s budget assumes will happen, as do the House and Senate budget resolutions, although they all find alternative savings in different and largely incompatible ways. But if Congress can’t do anything about the total size of the $500 trillion cut, Odierno said over and over, it can at least do something about the pace with which it takes effect.

While Defense Secretary Chuck Hagel made a passing reference to “back-loaded” cuts in his April 10 press conference on the budget, Odierno pushed the idea much harder in today’s testimony. Perhaps that’s because the pacing problem is particularly acute for the Army.

Why? Soldiers’ pay and benefits are the Army’s biggest single expense, a whopping 44 percent of the service budget, and the cost per soldier has risen roughly 50 percent since 9/11, so about half of the sequestration cut would logically fall on personnel. But troops aren’t temp workers: It takes time to move them out of the military, unless you resort to buy-outs that cost more than they save in the short run or to draconian involuntary separations that demoralize the entire force. That means other programs, from weapons procurement to combat training, will have to bear the brunt of the cuts for the first few years. On the current sequestration schedule, “we just cannot move enough people out of the Army quickly enough,” Odierno said in his opening statement, “so we will need to take disproportionate cuts in modernization and readiness.”

“You can’t take the amount of people you need out in an efficient way,” he said. “You lose the ability to do he right balance of modernization, readiness, and end strength.”

But that’s because current law allocates the cuts evenly across the decade — $50 billion in each year, which means the Pentagon budget makes a steep and sudden drop — and then actually begins to climb again, albeit slowly. By contrast, past post-war drawdowns have started small and then cut a little more deeply every year. Such a smooth downward slope gives the Pentagon more time to plan and to implement savings that are, in the long term, more cost-effective.

In an exchange with the inimitable Sen. John McCain, who like Odierno served in the armed forces during their post-Vietnam nadir, the era of the “hollow Army,” Odierno repeatedly emphasized the pace was the problem. “The steepness of cuts of sequestration could lead us back to where we were in the late seventies,” he said, and again, “the steepness of the cuts will not allow us to maintain that right balance.”

“If you backload it, that gives us the ability to plan and do this right,” said Odierno.