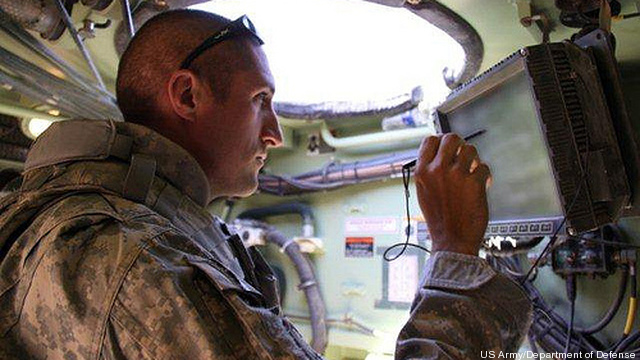 WHITE SANDS, NM: After weeks of testing at the Army’s vast facility here a private summed up the service’s newest iteration of the so-called Nett Warrior communication system in one phrase: “It ain’t ready.”

Soldiers with the 2nd Heavy Combat Brigade, 1st Armored Division (2/1 Armored) spent several weeks at the Army’s latest network integration exercise here putting Nett Warrior and other communication systems through their paces. Nett Warrior was so flawed it might well end up getting American soldiers hurt or killed if put into the field, five soldiers told me. The Army plans to ship out the first iteration of Nett Warrior to Afghanistan next year. The system being sent overseas in October will be a less-capable “bridge” version of Nett Warrior, Army spokesman Paul Mehney said. The full version of the system should hit the field sometime in 2014.

The Nett Warrior system is based on an “end user device,” which is essentially an Android or iPhone-like smartphone. Tied to the Army’s Rifleman handheld radio, the system lets soldiers link into the massive command and control networks used by the Army. Troops use applications installed on the smartphone to call in fire support missions, plan and coordinate operations and track friendly forces — all with the swipe of a finger.

The Army tested two of these “apps” here: a tracking system designed to locate friendly forces on the battlefield and a digital interpreter so soldiers can communicate with locals in Iraq and Afghanistan. Both apps failed to make the cut, our plain-spoken private said. Troops who were standing next to each other showed up kilometers apart from each other on Nett Warrior, the private explained.

The digital interpreter app did not recognize specific dialects and slang words used in rural Afghanistan. The system’s connection to the Army network dropped out repeatedly, leaving soldiers out of contact from other parts of the unit. When Nett Warrior was online the bandwidth was so restricted that soldiers had to wait minutes before the apps would start working. Those minutes may seem inconsequential on a test range in New Mexico with no one shooting at you. They can seem very long in a firefight in the mountains of Afghanistan.

That said, I asked a sergeant what he would do if he had top rely on Nett Warrior in battle. Without a word he took the smartphone device, slipped it into the carrying case attached to his flak vest and closed the top.

The harsh feedback soldiers offered came as no surprise to Col. Dan Hughes, the Army’s chief systems integrator. Hughes said that’s exactly the kind of feedback the Army wants. “We’re in the walk phase right now” he said regarding the Army’s progress on Nett Warrior and other net-centric systems. Flaws found during events like the NIE gives the Army time to fix those problems before they hit the battlefield, Hughes said. “You always find something [wrong] so why not find it earlier [in the process],” he added. The unit’s gripes about Nett Warrior came because many soldiers were comparing it to the performance they get from their own smartphones, according to Hughes. “Their expectations are [high],” he said, but added that Nett Warrior is not and will not be an Army-built “smartphone.”

Another group of soldiers from 2/1 Armored said they hoped the Army will heed their warnings on the immaturity of new networked communication systems, particularly Nett Warrior. “They probably won’t,” said another sergeant, spitting for emphasis.