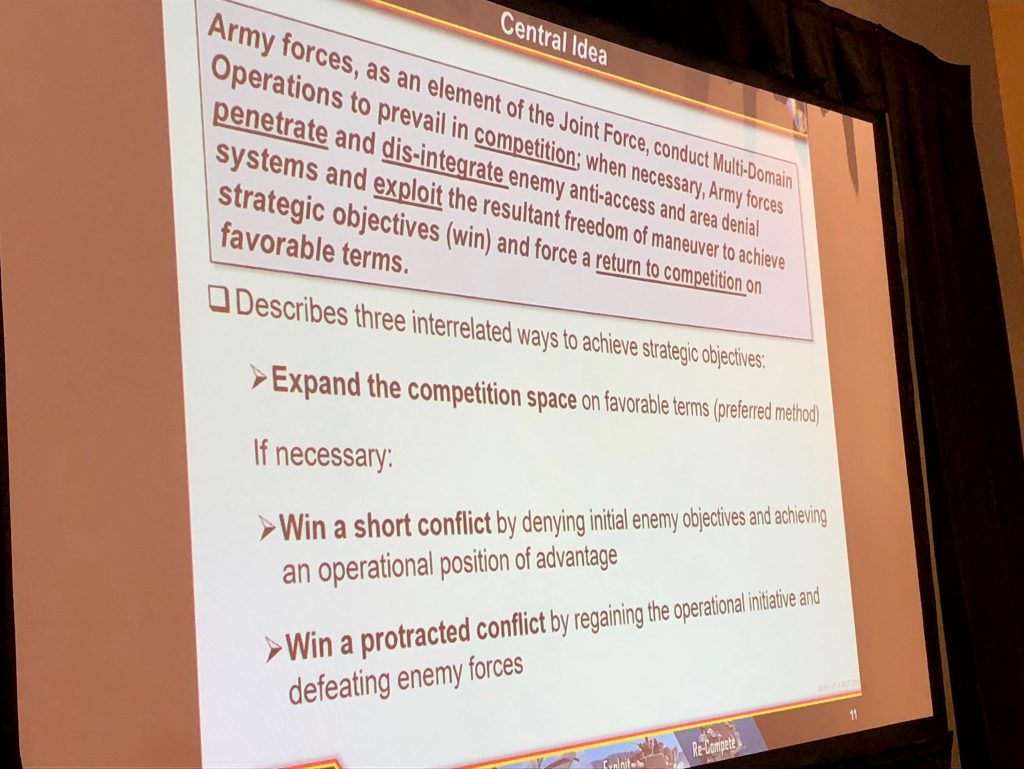 AUSA: If you doubted the importance of Multi-Domain Operations to the US military, all you had to do was listen yesterday to Army generals lay out the foundations of the emerging doctrine for fast-paced future wars. And it’s not just the Army: The service is increasingly intertwined with the Air Force.

The last time the US military grappled with a shift this profound — and the last time the Army and Air Force went through such an intellectual evolution together — was when it crafted AirLand Battle in the 1980s. Just as AirLand Battle was aimed straight at the former Soviet Union, with its massed mechanized armies, Multi-Domain Operations is aimed straight at Vladimir Putin’s Russia, with its long-range missiles, electronic/cyber warfare expertise, and Little Green Men. Of course, the concept also includes China as a threat, but the immediate focus is Russia. 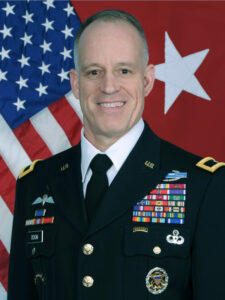 The Army will unveil its first complete doctrinal publication on MDO next month, but we got a preview from Brig. Gen. Mark Odom, the head of the Concept Development & Learning Directorate at the Army Capabilities Integration Center (ARCIC), which will soon move from Training & Doctrine Command to the new Army Futures Command.

Perhaps the most intractable challenge the Army must get to grips with? Russia and China do not recognize a state of peace, the way US law, doctrine, and culture do. Traditional US military planning goes from peace to war, and then we work our way methodically up the ladder of escalation. But Russia and China view conflict as a continuum, in which what Westerners call “peace” is merely a different arena to pursue what Clausewitz called “politics with an admixture of other means” — a strategic agility that often lets them outmaneuver the US.

“They don’t make the distinction we do between war and peace, like we do,” Odom said. The Russians impose their will  with a flexible mix of political and information warfare to manipulate public perception, proxy warfare and special operations to destabilize rival states such as Ukraine, cyber hacking and electronic jamming to blind sensors and paralyze communications, plus limited but capable naval and space assets, all backstopped by a large conventional land and air force to deter escalation. “This is designed to undermine our ability to make decisions and to respond and deploy,” Odom said.

Another challenge is that this approach means a “peace” can escalate “very quickly to fully armed conflict.” The Russians and Chinese will field organic forces “that can operate well before they get to the line of departure,” he said, using the formal US term for the jumping-off point to begin an advance. The potential pace is driven by such technologies as hypersonic and ballistic missiles that can strike targets at long range in short times, advanced surface-to-air defenses to keep out US aircraft, cyber/electronic warfare to disrupt US communications, space assets, and other systems that comprise what the US calls Anti-Access/Area Denial (A2/AD). So, Odom said, the Army must change how to approaches the battlefield.

When I saw some of the graphics Odom put up during his presentation, all I could think of was how important the F-35 Joint Strike Fighter could be for such a conflict. As the only US aircraft designed to penetrate advanced SAM systems to scout and strike, the stealth fighter will play a key role in opening the way for US forces to crack open the layers of an enemy defense. 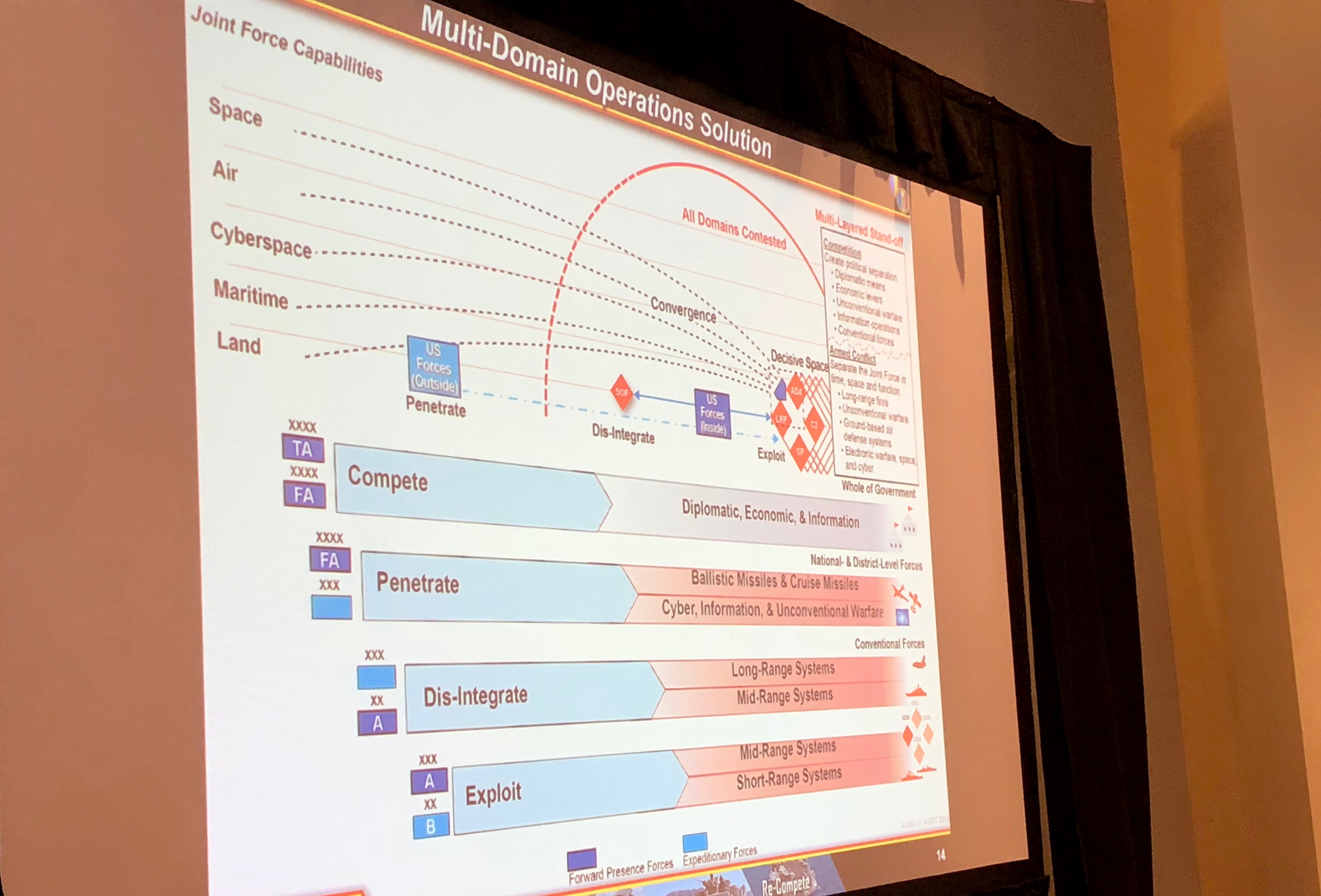 All this means that no one service is likely to be preeminent in such a conflict, Odom made very clear. It will require a truly joint force, not one cobbled together for each conflict as is currently the case. Command and control — the aspect the Air Force has taken the lead on, under the name Multi-Domain Command and Control (MDC2) — will be absolutely critical because of the speed at which such conflicts will unfold, because of the wide array of capabilities involved, because of the extensive geography involved, and because of the fact that it will involve all domains: land, sea, air, space and cyber. Odom noted how important some sort of combat cloud will be to prosecuting such a war, something the Air Force has repeatedly emphasized. 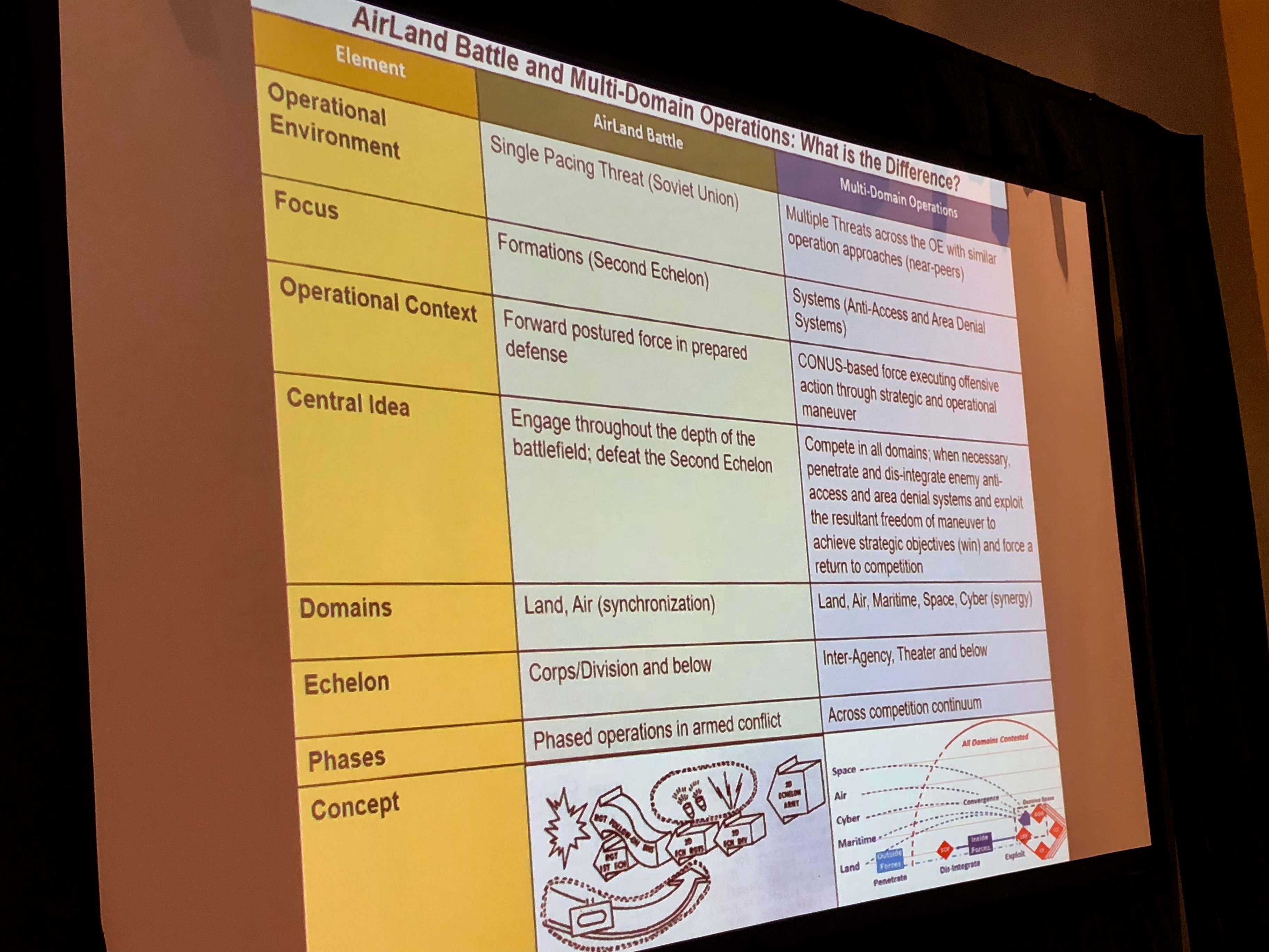 The other huge challenge for the Big Army will be significant organizational change, the one thing it tends to do the least well. Several officers I spoke with after the panel expressed deep worries that the service would field new technologies individually superior to their Russian and Chinese counterparts — “weapons overmatch” — but struggle to equip, organize, and train forces that can deploy quickly, in the face of sophisticated opposition, with the wide array of capabilities required.

The Army’s track record of major reorganization is distinctly mixed. The “Pentomic Division” devised in the 1950s for a nuclear-blasted battlefield was quickly abandoned, while the Future Combat System “unit of action” was stillborn when the FCS technologies were cancelled.

On the other hand, the Army managed to reorganize from large divisions to smaller, more nimble, and interchangeable “modular brigade combat teams” in the chaos right after the invasion of Iraq, and the plug-and-play brigades, rotating in and out of the Mideast on a regular schedule, became the essential building blocks of counterinsurgency forces there and in Afghanistan. Now, as the Army reorients from guerrilla warfare to great power conflict, it needs to revive some of the big formations — divisions and corps — and specialized units, such as long-range reconnaissance, that it has deemphasized for the last 15 years. It won’t be easy.