As Daesh Is Crushed, Future Of Middle East At Stake

The future of the Middle East is currently being determined, in a process that is almost entirely hidden from view. In recent weeks, the gaze of the world has been fixed on the fight against Daesh (aka ISIL), as the end of its occupation in Mosul, Iraq, and the breaching of its defenses in Raqqa, its Syrian capital, have symbolized the success of operations against this evil organization.

But the future of the Middle East is not being decided in Mosul or Raqqa, despite the importance of ending Islamic State rule over both. It will be determined by a fight that has attracted far fewer headlines—the struggle for control of the border between Iraq and Syria. 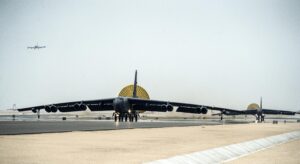 B-52 heavy bombers arrive in Qatar to join the air war against Daesh.

The US-led coalition is fulfilling the promise extended by President Obama “to destroy the organization” of Daesh. Obviously, the end of the terrorist group’s control over the territories it captured in Syria and Iraq does not mean the end of the organization itself, as it will continue to hawk its ideas throughout the Sunni world and to carry out terror attacks around the world. But from now on, it will be just another “ordinary” terror organization, like al-Qaida, for example. Daesh will no longer be seen as unique, as a remarkable success, as it was when it managed to hold such large swathes of territory and to rule over so many civilians.

Who takes over this territory once held by Daesh will determine the future of the Middle East. The Iranians are conducting an effort with great strategic implications, via their proxy Shia militias that operate in both Iraq and Syria. This effort seeks to change the map of the Middle East. It includes the displacement and extermination of Sunnis in key areas; the settlement of Shias into these areas, such as Mosul; and the creation of Shia ground corridors linking Iraq to Syria, with the aim of attaining a contiguity that has never previously existed, connecting Iran—the leading Shia power—to the Mediterranean Sea.

This will accomplish three goals for Iran: It will cut a Shia crescent through the heart of the Sunni world, from Tehran via Baghdad, to Damascus and Beirut. It will provide a territorial link to Iran’s forces in Syria and Lebanon, thus creating a direct strategic threat to Israel, supported by a Shia hinterland. And it will allow Iran to supply every Shia force in the region, posing new threats to the borders of Jordan to the south and Turkey to the north. 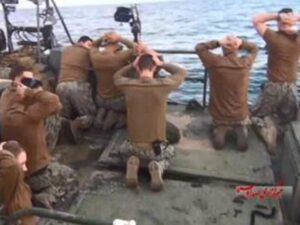 Navy sailors captured by Iran in the Persian Gulf

There is currently no force in this area—between Turkey and Jordan, along the Syrian-Iraqi border—capable of stopping Iran. The bizarre alliance struck between Russia, Iran, and the Shia militias (Hezbollah foremost among them) was only made possible by the nuclear agreement. The agreement made Iran a legitimate ally, by allowing it back into the international community and opening up trade. Russia, of course, has leapt at the opportunity: The two countries are now partners in the Syrian state, nominally headed by Assad, who would be long gone were it not for the Russian presence. Russia provides the air power and the international backing, while Iran provides the ground forces to fight the Alawite regime’s vicious battles.

For the region’s Sunni countries, this is nothing less than a strategic earthquake. For Israel, it is a nightmare. Therefore, it is imperative that there be active cooperation between the Sunni countries and Israel, including the use of military force, to stop this in its tracks.

The Arab states are too weak to deal with the problem alone, and Israel needs regional legitimacy in order to deploy its military might. While it would make things easier if the United States were to give its blessing to such a collaboration, this is by no means a necessary condition. Such an alliance, if created, would be able to act without American involvement. The United States would be asked only to provide an umbrella of international legitimacy. 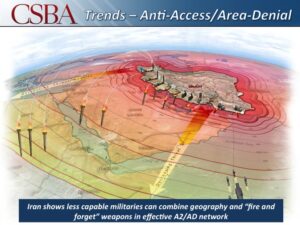 It appears that Iran, its confidence bolstered by the nuclear agreement and by its successes as an ally of Russia in Syria, is crossing every possible red line that protects whatever quiet and stability remains in the region. The fate of the Middle East is being decided right now; action is required to prevent a future in which Iran is the region’s leading and controlling power.

Yaakov Amidror, former national security advisor to the Israel’s Prime Minister and a retired major general in the Israeli Defense Forces, is a distinguished fellow at JINSA’s Gemunder Center for Defense and Strategy. He is also the Greg and Anne Rosshandler Senior Fellow at the Begin-Sadat Center for Strategic Studies, and former national security advisor to the Prime Minister of Israel.  He served 36 years in senior IDF posts, including military secretary to the Defense Minister, director of the analysis division in Military Intelligence, and chief intelligence officer of Northern Command.