B-21 Is One Big Win For Air Force Acquisition: Sue Payton

Sue Payton was the top acquisition official in the Air Force during one of the most difficult times in the service’s history, right after her predecessor Darleen Druyun was sent to prison  and Boeing’s CEO was forced out over unethical and illegal activities connected with the tanker contract. Payton labored mightily then to build an Air Force acquisition system that boasted “transparency and integrity,” so she knows how hard it can be to shepherd a large and hard-fought contract through the political and military minefields. In the following op-ed, Payton offers her thoughts on why the current Pentagon and Air Force leadership fared well in awarding the B-21 contract for 100 bombers to Northrop Grumman. 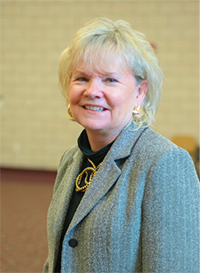 And a “good work” to the Air Force cost estimators, the Cost-Assessment and Program Evaluation (CAPE) team, Air Force contracting officers and the Air Force legal team for building a B-21 contract that stood up to the scrutiny of the Government Accountability Office.

The Air Force awarded Northrop Grumman the contract to build the nation’s new Long Range Strike Bomber (LRS-B) in October — a contract that was decades in the making. From 2006 to 2009, when I was head of Air Force Acquisition, the Air Force Headquarters Staff met regularly with the very best acquisition and air combat personnel to perform the foundational work of acquisition strategy and requirements development for our next bomber.  Over several presidential administrations, stable technology risk reduction investments in key areas such as an open mission systems architecture, were defined by joint government-industry teams for what we then called the Next Generation Bomber.

OSD acquisition and the Air Force got this one right even though leadership in the Air Force and DoD changed. Why? Focus on this critical military weapon system and risk reduction efforts of nearly $2 billion remained laser sharp. It is important to note that, in recent years, the Air Force legal team attracted to government service much needed personnel from the private sector. This talent brought to the military experience from years of work in the US Court of Federal Claims and US Court of Appeals, as well as invaluable experience representing industry in bid protest litigation.

Our Air Force/Northrop Grumman Team must now immediately begin the already late-to-need B-21 development program and rapidly deliver the critical operational performance on time and on cost — without further delay and more litigation.  The GAO upheld the Air Force B-21 contract award and that is a much-needed win for the acquisition proposal process. But it is only the first critical step to program success.

It is now up to the Air Force Secretary and Chief of Staff to champion the robust early stages of the B-21 program by budgeting necessary funding and giving full authority to the PEO and Program Manager for all aspects of program success, including all program support, contracting, finance and especially engineering workforce assignments.

Trust between the Air Force and Northrop Grumman LRS-B Team is essential to delivering our next generation bomber and can only be established through mutual respect for the technical talent assigned to these critical government and industry teams.

The B-21, with its highly survivable ability to penetrate and operate in a future Anti-Access, Area Denial (A2/AD) environment will be a viable counter to our adversaries’ future evolving threats of advanced air defense systems and highly capable surface to air missiles. The award to Northrop Grumman sets the stage for the successful development and production of the B-21. Current and future Air Force leaders and presidential administrations must provide the strong support needed over the next decade to achieve success.