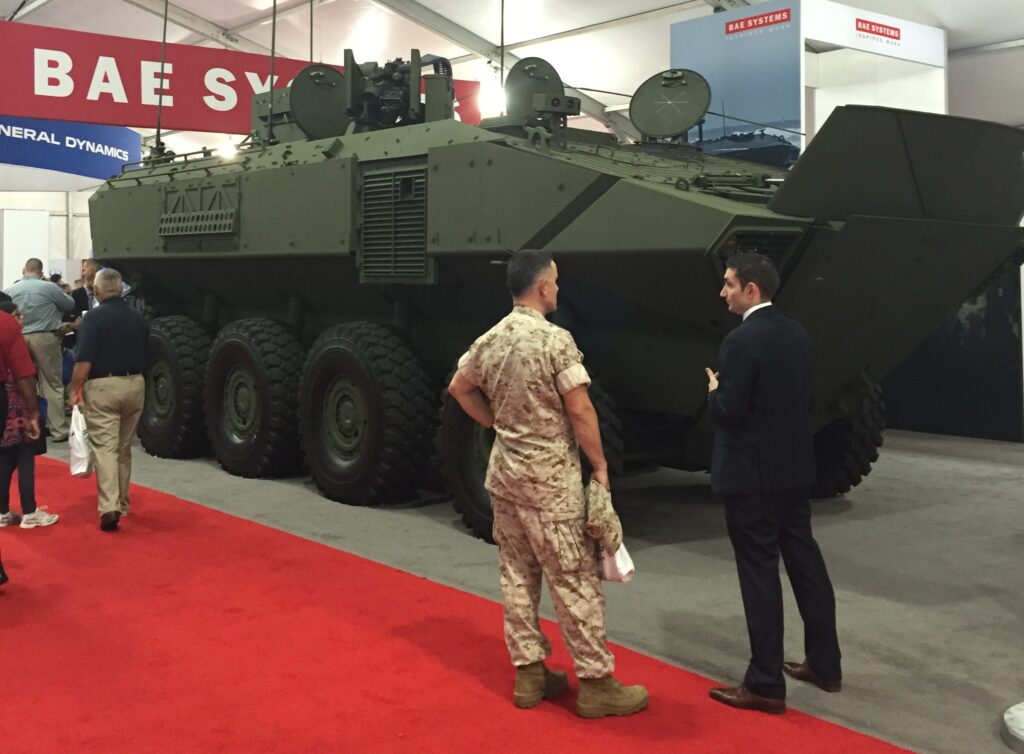 The Marine Corps has chosen long-time tank-maker BAE over upstart SAIC to build its new Amphibious Combat Vehicle. A wheeled troop carrier capable of swimming from Navy ships to shore and then driving deep inland, the ACV will replace the aging, ungainly, and under-armored AAV as the spearhead of amphibious assaults. The ability to conduct such landings is the modern Marine Corps’ raison d’être — but it’s come into question, even by the Senate, in this era of long-range missiles.

The initial contract announced today was just $198 million for the first 30 vehicles, to be delivered by next fall. 30 more will come the next year, with Initial Operational Testing & Evaluation (IOT&E) and a decision to go to Full Rate Production expected in 2020. Overall, Marine officials told reporters they want to replace approximately 870 existing AAVs with ACVs “as rapidly as we can,” which will take into “the mid to late ’20s.” The current budget plan values the first 204 vehicles at an $1.12 billion.

Winner BAE Systems is an international giant, the eighth largest defense contractor the US and third largest in the world. Among many other things, it builds and upgrades the M2 Bradley troop carrier and M109 Paladin howitzer, both heavy tracked vehicles, at its York, Pennsylvania factory. BAE or its predecessor companies have built every Marine amphibious armored vehicle since the amtracs of World War II. 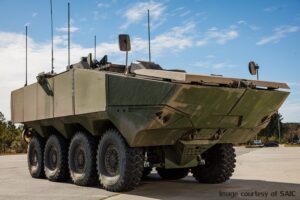 SAIC, by contrast, started out as a consulting and services company, noted for its engineering expertise. It branched out during the Iraq War to work on MRAPS, essentially uparmored trucks. Its Charleston, SC facility installs high-grade military gear like electronics on other companies’ vehicles and upgrades the Marines’ existing AAVs. So the wheeled ACV was SAIC’s first foray into both full-size armored fighting vehicles and into manufacturing, making it the riskier option for the Marine Corps. SAIC, in a statement, said while it was “disappointed…we are committed to growing this line of business” — but failure here is a bad sign for SAIC’s other armored vehicle bid, to build the US Army’s tracked Mobile Protected Firepower (MPF) light tank.

Despite their differences, both companies offered basically similar 8×8 vehicles. Both started with foreign designs, since the US is a world leader in tracked armored vehicles but not in wheeled ones. BAE collaborated with Italy’s IVECO (subsidiary of world-famous Fiat) to offer a variant of the SuperAV/Freccia/Centauro family in Italian service since 1991. SAIC partnered with Singapore’s ST Kinetics to offer an upgrade of the Singaporean army’s Terrex. (For comparison, the main 8×8 armored fighting vehicles already in US service, neither of them amphibious, are the Marine LAV and Army Stryker, both descendants of the Swiss MOWAG Piranha).

The most obvious difference: The BAE vehicle can carry two more infantrymen. While both vehicles had a crew of three up front — driver, gunner, and commander — BAE could carry 13 fully equipped foot soldiers in the back, while SAIC could only carry 11. Since the current Marine rifle squad is 13 men, and the future squad will shrink to 12 (including a drone operator), that may have been a crippling disadvantage for SAIC. 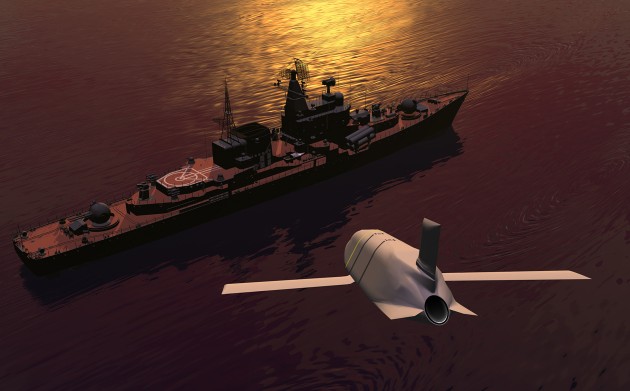 Even as the Marines award the contract for what they’re calling ACV 1.1, the Senate Armed Services Committee wants to freeze spending on the next phase of the Amphibious Combat Vehicle program, ACV 1.2. The program may only proceed once the Pentagon reports to Congress on the viability of amphibious landing in future warfare. Or, to quote the Senate draft: “whether amphibious forced entry operations against advanced peer competitors should remain an enduring mission for the joint force considering the stressing operational nature and significant resource requirements of such mission.” 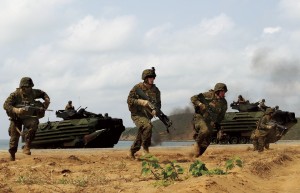 Marines will have to rely on the current Amphibious Assault Vehicle (AAV) to carry them ashore for years to come.

That’s a long way of stating the big question the Marine Corps must confront: whether the amphibious assaults which the ACV is built for, and which have been central to the Marines’ identity since World War II, have become suicidal with the spread of long-range precision missiles. Land-based anti-ship cruise missiles (ASCMs) can sink Navy ships hundreds of miles offshore, anti-tank guided missiles (ATGMs) can kill armored vehicles as they swim in, and RPGs and landmines can hit anyone who makes it to the beach.

Of course, that’s all assuming the enemy is ready for you. The first principle of tactics is “hit ’em where they ain’t.” Modern Marine Corps doctrine emphasizes intelligence and maneuver to put small, fast moving forces ashore at multiple undefended or poorly defended points, instead of a single set-piece assault like Tarawa or Normandy. (Of course, Normandy was selected in large part because it was one of the less likely of the Northern European landing sites. And much effort was put into deceiving the Germans as to where the Allies really would land. Read up on Operation Bodyguard!)

“Yes, modern ATGM and ASCM threats are serious,” said Dakota Wood, a retired Marine now at the Heritage Foundation. “(But landings would) avoid enemy concentrations where possible….Not every contested environment will be so heavily defended as to make it impregnable or impervious to assault.”

“If the US is to have options to pose dilemmas to an enemy, to seize terrain, to project power in ways that don’t require an airport, seizure of a port, or long overland movements, it will need some type of amphibious assault capability,” Wood told me in an email. “This is what the Corps is working to figure out.”

In this operational context, the ACV’s cross-country mobility is at least as important as its ability to swim, since you’d likely land at an undefended beach some distance from the (presumably well-defended) objective. That’s why the ACV program went for much smaller vehicles than the current AAV, whose bulky, boat-like hull can carry 28 Marines efficiently from ship to shore but then lumbers once on land. For all its size, the AAV is fairly poorly protected, especially against roadside bombs and other improvised mines. The new ACV, by contrast, is optimized to move and survive on land. 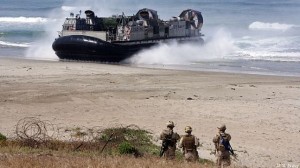 The Marines had tried for decades to get better performance on the water. They spent $3 billion on the Expeditionary Fighting Vehicle (EFV), which could skim across the surface of the water like a speedboat at 20 to 25 knots, compared to the AAV’s 6 to 8 knots. But the cost and complexity of the “high water speed” vehicle, and its poor performance on land, caused the Marines to cancel it in 2011.

Instead, after intense debates and dramatic reversals, the Marines settled on the current Amphibious Combat Vehicle, which will have the same water speed as the old AAV. Originally, the program proposed a minimally amphibious ACV 1.1 and a more capable ACV 1.2, but both contractors met the ACV 1.2 specs with their 1.1 entries. The ACV 1.2 will still include stronger weapons and other upgrades, the Marine officials said. (Despite persistent rumors, however, ACV 1.2 will be wheeled like the 1.1, not tracked).

Even the upgraded ACV 1.2 will still leave one problem unsolved: how to get from ship to shore at high speed, allowing the Navy to stand off out of range of most, if not all, land-based missiles. “The ACV 1.1 seems more about motorization than amphibiosity,” said a skeptical Jim Hasik, a senior fellow with the Atlantic Council. “The program really won’t provide the Navy and the Corps with the standoff capability they need for a landing on a coastline protected by mobile anti-ship missiles”

The Marines still want a high-water-speed option eventually, tentatively called the ACV 2.0, but it may not be a high-speed armored amphibious vehicle, officials said. How to go faster — new landing craft, robotic “sleds” to carry land vehicles, hovercraft — is an open question.