Be ‘Dominant’ In Pacific, But Make Nice With PRC, Singaporean MoD Tells U.S. 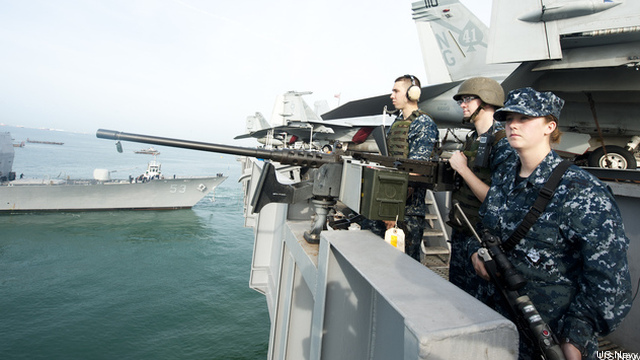 WASHINGTON: The US plays a “dominant role” in keeping the peace in the Pacific, and that’s a good thing, said Singaporean Defense Minister Ng Eng Hen — but the US still needs to cooperate with China, not confront or contain it. That’s the word to the wise from one of America’s closest military partners in the Pacific.

“The US, as a ‘resident power,’ should continue to play its dominant role in maintaining peace and stability in the Asia-Pacific… within the regional security architecture,” Ng said carefully, using a diplomatic term of art — “resident power” — that emphasizes America’s long-standing presence in East Asia. A Scottish-trained surgeon turned politician who took over the Defense Ministry last year, Ng spoke at an event sponsored by the Center for a New American Security, this morning before heading to the Pentagon to meet with Defense Secretary Leon Panetta this afternoon.

The two countries have grown closer in recent years: US ships (pictured above) and planes frequently visit the island city-state; Ng recently reaffirmed Singapore’s commitment to its tiny but symbolic deployment to Afghanistan; and Singapore will host some of the U.S. Navy‘s new Littoral Combat Ships. But the Defense Minister is also quick to point out that the American ships will only operate out of Singapore “on a rotational basis,” rather than being permanently based there, and in fact demanded a correction to an earlier version of this very article that used the politically loaded word “base.” Singaporean officials still emphasize they are simply America’s “partner,” not a formal ally, and that they have no desire to take sides in any kind of Sino-American Cold War. Except, of course, they want us there as a very clear message to China but without diplomatically throwing sand in the local bully’s face.

“The US-China relationship is the critical relationship that will affect peace and stability in the Asia-Pacific region,” he averred. “There’s been no shortage of goodwill statements from both the US and China… but in practice much more work is needed to achieve this healthy, stable, and reliable military-to-military relationship between the US and China.”

In particular, Ng went on, “the recent announcement of [a] ‘pivot to Asia’ was read by some in China as a strategy for containment.” Ng clearly preferred to deemphasize the still-largely-rhetorical “pivot” and focus on the continuity of America’s East Asian presence dating back more than fifty years. The American policies Eng applauded were not the “pivot” but commitments to multi-lateral cooperation, especially the “ASEAN Defense Ministers’ Meeting Plus,” which brings together officials from all ten members of the Association of South-East Asian Nations with eight outside partners, notably including both the Americans and the Chinese. (The ADMM+, as it is known in diplomatic shorthand, will soon hold a counter-terrorism exercise in Washington, co-hosted by the US and ASEAN member Indonesia).

It’s understandable that Singapore, for all its pro-US leanings, should urge America not to rock any boats in the Pacific. The tiny island nation punches well above its weight militarily, spending more than 4 percent of its gross domestic product on defense — proportionately much more than European allies like Britain or France — and buying so many sophisticated weapons, mainly from the United States, that it counts as the world’s fifth-largest importer of arms. (One notable acquisition is the F-15 fighter, built by Boeing, which incidentally funded this morning’s event). But with just five million people crammed into 260 square miles — not quite four times the land area of Washington, DC — the city-state can hardly hope to hold its own in any major conflict, and it depends on easily disrupted sea lanes to feed its population, let alone keep its economy thriving. It’s fun and easy to pound war drums in Washington, DC, but they echo all too unnervingly in the region where the US and China would actually square off.

Updated at 10:25 am, 5 April, to incorporate clarifications from the Singapore Ministry of Defense.