Billions At Stake As Army Opens Competition For Rifleman Radio 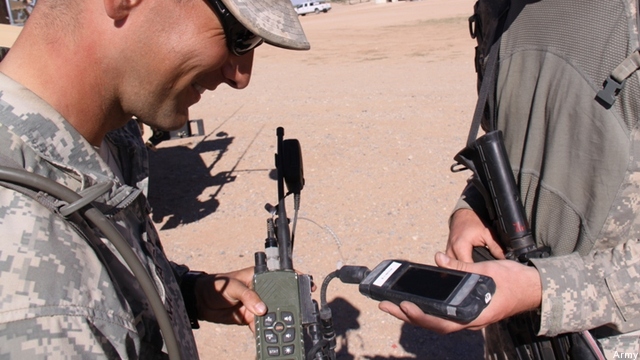 WASHINGTON: The Army took a major step today towards opening up a major radio program to full and open competition, issuing a formal Request For Information today asking industry’s input on the Rifleman Radio program.

[More on this story: Radio contractor General Dynamics apologizes to the Army]

The hand-held Rifleman Radio and the backpack-sized Manpack Radio are the last survivors of the highly ambitious, deeply troubled, and now largely cancelled Joint Tactical Radio Systems (JTRS) program to build new digital radios for all the armed forces. Both radios are now in what’s called “low-rate initial production” (LRIP): The Army has ordered 3,726 Manpacks from General Dynamics for more than $250 million and 19,327 Rifleman Radios, half from GD and half from Thales.

Before either radio goes to full-rate production, however, the Army plans to open them to “full and open competition” in which any industry vendor is welcome to take on the incumbents now doing LRIP — something which lobbyists tried and failed to forestall earlier this year.

This unusual approach is about exploiting opportunities, not about any lack of confidence in General Dynamics or Thales, Army officials insisted to Breaking Defense.

“The program had some issues,” acknowledged Brig. Gen. Daniel Hughes, director of “system of systems integration” at the Army’s Aberdeen Proving Ground. Hughes was buttonholed by Breaking Defense on the sidelines of the massive Association of the US Army conference in Washington this week. But, Hughes emphasized, “it’s always been in the plan to get to competition” for full-rate production.

As information technology keeps advancing, Hughes said, today “there are a lot more vendors out there” potentially able to meet the military’s needs. It would be a missed opportunity not to cast the net beyond the incumbent contractors.

That doesn’t mean the military is dissatisfied with what lead contractor General Dynamics has done, Hughes insisted.

The Manpack radio in particular was declared “not operationally suitable” by the Pentagon’s independent Director of Operational Test & Evaluation, Michael Gilmore, after painful trials in soldiers’ hands at White Sands Missile Range, New Mexico earlier this year. But it then passed a re-test — admittedly one conducted by contractor personnel in less challenging conditions at Fort Huachuca, Arizona. That second test was in a “benign” environment “not designed to replicate realistic combat conditions nor…to test the full functionality of the radio,” according to an email from Gilmore published by Bloomberg’s Tony Capaccio, and even after modifications the Manpack radio “continued to demonstrate poor reliability.”

General Dynamics protested the original test conditions were unrealistically difficult. White Sands is a multi-service missile range with so many different devices transmitting on adjoining frequencies that “all radios had problems in that environment,” Chris Marzilli, president of General Dynamics C4 Systems, told Breaking Defense earlier in October. “It’s physics.” At Huachuca, the Manpack radio consistently beat requirements, Marzilli said, and General Dynamics has also fixed a host of issues such as slow boot-up time and poor installation in vehicles. “Every one of those problems… was corrected,” he said.

“That’s what industry does,” Brig. Gen. Hughes said at AUSA: It keeps improving. “They did a government test [at Fort Huachuca, and Under Secretary of Defense for Acquisition, Technology, and Logistics Frank] Kendall was happy,” said Hughes, allowing the Manpack to proceed to low-rate initial production.

But rival radio manufacturers clearly smell blood in the water. Defense industry analyst and consultant Loren Thompson, a member of Breaking Defense’s own Board of Contributors, wrote an article today in Forbes touting BAE in particular as a competitor, although he and others also cite Exelis, Harris, and Northrop Grumman. Today’s RFI represents the first formal step towards a no-holds barred battle with billions at stake.