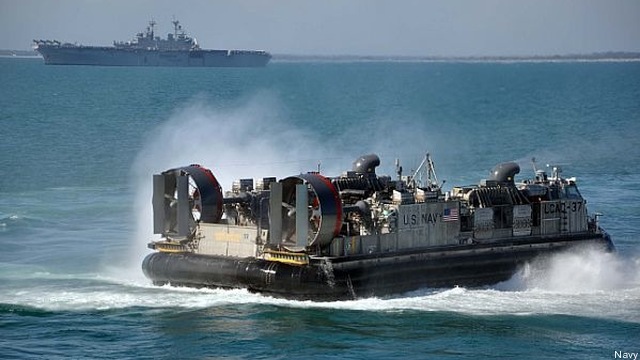 The Navy-Marine Corps team just completed the largest amphibious exercise in more than a decade. But what did people see? What did they recognize in the Bold Alligator exercise and focus upon?

Because it is called an amphibious exercise, outsiders who attended the exercise tended to focus upon the amphibious ships themselves, the landing ships, the vehicles and the assault on the beach. This is the trouble with what one sees.

The reality was that this was a power projection exercise, it was a maneuver of forces from the sea inland and out again. Bold Alligator 2012 was a shift towards a new paradigm. With the U.S. and its allies turning from the land wars of the past decade to formulating new approaches for the decade ahead shaping new approaches to the use of joint and coalition forces is clearly required.

In an interview after the exercise, Adm. Kevin Scott, 2nd Expeditionary Strike Group commander, underscored that the core effort was to bring the Navy-Marine team and the allied team together into an enhanced capability to operate from the sea. Re-crafting maneuver warfare from the sea is not just about technology and new capabilities; it is based on a concept of operations where collaborative team efforts become seamless.

With global challenges not going away, and financial constraints biting, the need to get best value out of current assets while adding new ones is a key element of strategic change.

So what images of change were embedded in the Bold Alligator picture? There are more than can be discussed in a single article, but I will focus on my top 8 images of change.

First, an assault raid was conducted from the seabase deep inland (180 miles) aboard the Ospreys with allied forces observing or participating. The Osprey was the key element operating in this exercise, which was not there during the last big “amphibious” exercise.

As the key coalition officer (Lt. Commander Pastoor) in the planning process, a Dutch naval officer, underscored: “We had Dutch observers and they were very impressed with the game changing capabilities of the Osprey in terms of range and speed. Normally, in such an exercise we would take the beach and operate 30 miles inland. With this new capability we can operate throughout the entire battlespace and move forces as if across a chessboard.”

Let us hover over this image. Instead of assaulting the beach, the forces aboard the sea base are maneuvering within and over the battlespace inserting, moving and withdrawing forces. This is a far cry from just looking at photos of the landing ships and assault vehicles.

Second, one would have looked at the BAC1-11 aircraft carrying the F-35 combat systems and see many things, notably the capacity to provide information to the MARSOC insertion forces about the battlespace in real time. The combat systems are tested and mated with the weapons certification of the F-35 this spring. (We can do the Nike thing: Just do it.)

Third, if one had visited the exercise team before the exercise, one would have seen an incredible process of integration of coalition partners into the planning process. And a core focus of these planners has been upon sorting out to more effectively managing information, distributing information and operating with a common operational picture.

“Coalition is a key part of Bold Alligator. It’s been there from beginning. From the very first concept development conferences in the beginning a year ago, coalition engagement was central. Nowadays operations aren’t done without coalitions. The Bold Alligator process is U.S. and coalition as one team from beginning onwards. It’s really working well, getting to the same goals, doing the planning process together, working in close coordination with the French Task Group, having their plan’s over, having 6 to 10 officers from New Zealand flying in for planning conference. We have a lot of coalition participants in our staff for the operation itself really emphasizes the importance of coalition.”

He also emphasized that managing information from the SIPRNET was and is a problem. This is why the default for future operations will need to be CENTRIX or the NATO standard. During the exercise CENTRIX was used as the coin of the realm. Pastoor underscored that planning needs to be done in CENTRIX so that there is a seamless flow to exercise and operational collaboration.

Fourth, the French amphibious ship Mistral was the centerpiece of a physical allied contribution. The ship and its team arrived early for bilateral operations and the ship was cross-certified with US equipment and procedures. It was one of the stars of the Libyan operation and worked closely with the allies in dealing with those challenges.

But the Mistral was not just a solo French contribution. It represented an entire class of ships of various sizes being built by allies – Spain, Italy, South Korea, Australia, etc. – that will carry significant aviation assets evolving over the years ahead and give this capability longer reach and impact. The F-35B will be added to several decks, the Opsrey, the Tiger and X-3 helicopters, the CH-53K, the NH-90, unmanned aerial vehicles of various sizes and kinds. In short, the future belongs to clusters of these types of ships.

Fifth, the Mistral image would raise another image. No platform fights alone. The Mistral deploys with other ships, notably frigates which provide for air defense. Images could be seen if one looked of ships like the Aegis which engaged and deployed to provide a protective cover along with the Big E and its deployed assets.

Sixth, the images of the Harriers operating off of the Kearsarge raised another prospect of capabilities and changes. Some 16 Harriers operated off of the large deck amphibious ship, in an approach which was very un-ARG like. Normally, the Navy and Marine team operates in three ship formations called Amphibious Ready Groups with a Marine Expeditionary Unit or MEU onboard. This exercise worked at a much more aggregated level with many more ships.

The Harriers based on the USS Kearsarge worked closely with land-based air to provide for a significant air combat capability to shape the battlespace. This model can be followed immediately in the Middle East with Arab, Israeli or western air forces deployed temporarily on Arab soil. The point is that the organizer of the spear is on the sea-base. This capability can be conjoined with the various air combat centers extant or being developed in the region.

Seventh, the MV-22 landed on a T-AKE ship. This means that this new aviation asset can connect supply ships with combat ships to potentially allow a much more efficient use of the combat ships.

What this in turn means is that by building more of these new supply ships, the combat power of the fleet can be enhanced, and the Navy-Marine Corps team get its combat ship numbers up. This is not a substitute for adding new amphibious ships to the fleet. But with the new approach and new concepts of operations the combat capabilities can become extended and more sustained. It is about sustainable maneuver warfare from the sea. And the new VM-22 T-AKE combination is a potential war winner.

Finally, one could focus on various capabilities to deal with asymmetrical threats. A clear message from the past decade is that one needs to define, respond and anticipate asymmetrical threats. The images of various assets dealing with the counter-mine threat, whether they be French special forces or SEALS in the water, the Canadian counter mine vessel, the riverine forces, or the mammal insertion from the virtual engagement of West Coast USN teams were prevalent and clear. A seabase will not survive if the asymmetric threats are not taken into account.

In short, re-shaping maneuver warfare from the sea by encompassing allied and US land-based air and other support and strike capabilities is a crucial element of the way ahead.

New uses of the sea base, new capabilities deployed from the sea base will allow the U.S. and its allies to deploy scalable forces and to shape a force appropriate to the mission. An economy of force approach can be shaped to ensure that mission and forces match, but, with scalability, other capabilities can augment the force to ensure mission success.