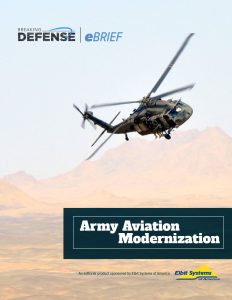 After 15 years of hovering in place, upgrading old helicopters without buying new designs, Army aviation is now hurtling forward — but will their ambitious new programs soar or crash?

The Army’s track record on big weapons programs is not encouraging, with three cancelled helicopters projects alone since 2004. But it has now united its feudalized bureaucracy into a new Army Futures Command and devoted $57 billion to modernization over the next five years. About $4.7 billion of that money goes for new drones and manned aircraft, with funding for what’s called Future Vertical Lift quadrupling from 2019 to 2020.

The Army plan calls for two new “optionally manned” aircraft capable of flying pilotless if necessary — an assault/utility transport and a small, nimble scout — and a family of drones in different sizes. All are meant to work together with each other, with Army long-range missiles, and with the other services’ jets to crack open the high-tech layered defenses being built by Russia, China, and lesser powers.

We’ve broken down all the latest developments in a new eBrief, available to all as a free download now.

This eBrief is an editorial product sponsored by Elbit Systems of America.