Over the last decade, this command and control aircraft, empowered by its Ground Moving Target Indicator (GMTI) radar, has identified, tracked, and targeted conventional and irregular enemy ground forces. As operating costs on these refurbished 707 airframes are rising and new sensor technology is at hand, the time is at hand to modernize this low-density, high-demand system.

Using its synthetic aperture and moving target indicator radar to detect, locate, track, and classify mobile ground targets, the system has proved essential as a command and control (C2) and intelligence, surveillance, and reconnaissance (ISR) asset in support of various U.S. military operations since the end of the Cold War.

Joint STARS was first used in combat in the 1991 Gulf War, when two developmental aircraft provided air-to-ground surveillance and targeting support to coalition forces. Perhaps most notable in that conflict was its role in the battle of Al Khafji when JSTARS detected the southerly movement of Iraqi armored and mechanized units through a sandstorm, allowing friendly air forces to defeat the adversary’s thrust with relatively minor contact between opposing ground forces.

Following that conflict, Operation Enduring Freedom (OEF) and Operation Iraqi Freedom (OIF) highlighted the value of JSTARS in very different scenarios. From intelligence preparation of a conventional battlefield to command and control of air and ground assets pursuing the movements of individual terrorists and insurgents, JSTARS proved its worth. As conventional conflict was superseded by combat operations against an insurgency, JSTARS missions expanded to include convoy over watch and search and rescue coordination.

However, as guerrilla-like attacks in Iraq accelerated, GMTI radar data became essential to the manhunt for terrorist leaders and for revealing the network emplacing improvised explosive devices (IEDs) that were responsible for so many American casualties. The surveillance and targeting guidance provided by JSTARS in both Iraq and Afghanistan was turned into a battle management system illuminating the insurgent movement — often narrowed down to specific individuals and buildings — important to limiting collateral damage from ensuing air and ground strikes.

Thus, whether supporting ground forces in conventional or irregular conflicts, the carrying capacity of the platform, the sensor granularity of the radar and the communications connectivity of the mission suite of JSTARS have provided a vital combat edge to American and allied forces.

Given that the system has performed so well in various military contingencies over the past two decades, the Air Force has elected to update and prolong the capabilities provided by this system. To optimize this capability and to leverage industrial competition — while reducing risk — the Air Force separated the recapitalization into three elements — the aircraft, the radar, and the mission suite. Each of these competitions offers challenges and opportunities. 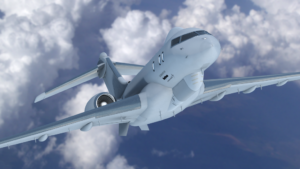 First, there is the platform competition. Here the Air Force faces a choice between better mission capability and the potential for future system growth. Boeing is offering a derivative of its 737 commercial airliner. The two other competitors, Lockheed Martin, and Northrop Grumman, are offering smaller business jets. The smaller aircraft offer a wide range of performance advantages: operating from more airfields (shorter runway requirements), taking up less ramp space and flying higher. Increased altitude equates to better “look angles” for the radar, thus adding a capability to see more ground targets with greater precision. 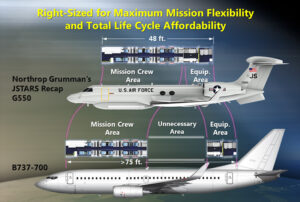 The 737 offers greater size, weight, and power, which allows for increased capacity. But with greater size comes a greater operating and support costs. And, at a time when electronics are getting smaller and lighter rather than larger and heavier, added capability may not require more space and weight. Trading higher costs in the near term for future capacity offers a risk equation ripe for solution. Only the Air Force can have an understanding of the future operating environment in which it will find itself, making the service best placed to weigh these tradeoffs.

The second competition is for the radar, and both Northrop Grumman and Raytheon are veterans of producing effective and efficient GMTI radars. The Air Force has concluded that the best solution to support these targeting and battle management missions would be a multi-band radar covering both the “X” and “Ku” frequency bands. The Ku band, with its short range and localized engagement capability, has proven effective at supporting air and ground campaigns against irregular targets in friendly airspace.

The final competition in JSTARS recapitalization is for the mission suite, the heart and brains of the system. Boeing, Lockheed, and Northrop are all likely to submit proposals integrating the airframe and the C2 suite. They will also hew to the Air Force “strategic agility” thrust, in which the service prefers open system architectures to reduce risk in the technical development phase of the program. As it does so, the service will keep in mind the key criteria for an ISR and battle management system: timely decisions and actions utilizing precise, decision-quality data; real-time control and direction of air power assets; matching target and attack decision support according to approved tactics, techniques and procedures; and, maintaining a tactical advantage in both contested and non-contested airspace.

Thus, a considerable amount of integration is required to ensure that a new, smaller platform (in terms of the number of work stations on board and the insertion of new radar technology), will exceed the performance of the existing JSTARS system. The focus will be on software, frequently the driving factor in lowering cost and risk. Although the contractors likely to bid are all skilled in system integration, whether real or perceived, the advantage in this competition might lie with Northrop Grumman, the JSTARS incumbent since 1991. In watching other acquisition programs, this has been the case on a number of occasions. However, the Air Force will certainly pursue a system that best meets the service’s need at the best price.

Building a new JSTARS, the Air Force can seize an opportunity to meet acquisition challenges, allocate defense resources more efficiently and improve mission accomplishment while also lowering cost and risk. Their selections in the three separate competitions at hand will determine how successfully they manage that opportunity. Whatever decision the service ultimately makes, airmen, soldiers, sailors, and Marines will benefit from the capability the system provides.

Adam Lowther is director of the School of Advanced Nuclear Deterrence Studies (SANDS) at Kirtland AFB. His latest book is Defending the Arsenal: Why America’s Nuclear Modernization Still Matters. The views expressed in this article are his alone and do not represent the official position of SANDS or the Air Force.