Can U.S. Keep Pressure On In Persian Gulf If USS Nimitz Is Delayed? 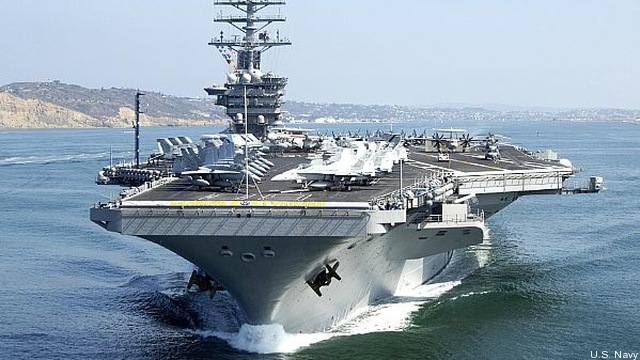 Iran. Gaza. Syria. Political opposition in the Emirates and adjoining states. The Persian Gulf region simmers and America may have only one carrier group deployed there at the end of this year. Should we worry?

Let’s examine the puzzle. The USS Nimitz’s planned deployment to the Persian Gulf may be delayed. That is raising concern, since the Navy will be down to just one carrier in the region during the months of December and January.

But are carrier groups the only agents of US influence in the region? The U.S. Air Force has numerous bases and installations from which it operates. Indeed, Air Force tactical air is a key part of any joint air operations, while the real threat the United States poses to Iran’s nuclear ambitions comes from Air Force heavy bombers and their massive ordinance loads, which are operated by Global Strike Command and based in the continental U.S., as well as in the region. Similarly, any theater air operations will be dependent on Air Force tankers in the skies off the battlefield.

The Middle East and Persian Gulf bases the Air Force operates from include: U.S. Air Forces Central headquarters at Al Udeid, Qatar, with the 379th Air Expeditionary Wing; Ali Al Salem in Kuwait, hosting the 386th Air Expeditionary Wing; Dhafra, in the UAE; Seeb, in Oman; Kabul, Bagram (455th Air Expeditionary Wing) and Kandahar in Afghanistan; and Bishkek, in Kyrgyzstan. Aircraft currently based in the region include: A-10s, F-16s and 15s for precision air attack; remotely-piloted Predators and Reapers; B-1B bombers; and air mobility and refueling C-130s and KC-135s. Land-based tankers operating in uncontested skies extend the 1,000-mile combat radius of the F-15 Strike Eagle and 500-mile radius of the F-16. The Strike Eagle also carries 23,000 lbs of ordinance, an advantage land-based air has over carrier-based fighters.

The Pentagon’s primary concern in the Gulf is a possible confrontation with Iran. Should it come to that, the Air Force will carry much of the load, given that any airstrikes on Iranian nuclear facilities would require MOABs and Massive Ordinance Penetrators carried by B-2s from Whiteman AFB, as well as early stealth attacks by B-2s and F-22s to disable Iran’s integrated air defenses and allow follow-on strikes by non-stealthy fighters.

Land-based airpower may be more cost effective than naval air in terms of sorties and ordinance loads, but it is dependent, obviously, on the willingness of foreign states to host U.S. forces. While that is not a problem the carriers face, the Nimitz delay highlights the risk of becoming too dependent on naval air. Ship rotational schedules have little room for disruption, and unforeseen problems, like that with the Nimitz’s propulsion system, can leave a gap in the Navy’s presence. While aircraft carriers are a potent symbol of American power, there are only 10 of them, with the impending decommissioning of the USS Enterprise. That translates into one or two at most able to carry out steady state operations in any one area of concern (primarily the western Pacific Ocean and the Persian Gulf).

Carrier air wings, moreover, boast a maximum of about 100 fixed- and rotary-wing aircraft. The Nimitz, for example, usually carries four squadrons of F/A-18 Hornets (two squadrons of Super Hornets, two of older Hornets), one E-2C Hawkeye squadron, one EA-6B Prowler squadron, and two MH-60 Seahawk helo squadrons. That means about 120 fixed-wing aircraft, and roughly 85 fighters, for two carriers, with the F/A-18E/F Super Hornets limited to a roughly 530-mile (460 nautical mile) attack radius (and slightly less for combat radius), carrying approximately 9,000 lbs of ordinance. Surge requirements during a time of crisis would gravely tax the Navy’s capacity, and lead to a corresponding absence in other parts of the globe as carriers were moved to where they were most needed.

In-theater limitations are less of an issue for the Air Force, as it can replenish forces more easily from land bases. This provides crucial sustainability during a conflict, and land bases of course do not need to be rotated in and out of the combat zone. The long-range strike capabilities of the U.S. Air Force ensure their ability to reach any spot on the globe from secure bases in the United States or Europe, while a fairly robust network of forward bases means that Air Expeditionary Wings can quickly assemble to project comprehensive airpower capabilities. This requires, of course, continued partnerships with allied nations to allow access, and the loss of key forward bases would be a major blow to shorter-range air capabilities, like tactical air support. Yet such changes in the basing environment are rarely sudden, and can be mitigated with foresight and planning.

The bigger problem for the Air Force is numbers. With only 20 B-2s globally (fewer than that at any one time), and just 185 F-22s after last week’s crash in Florida, stealth and long-range strike are precious commodities. It will be more than a decade until the next generation bomber is built and operated, and the F-35 timeline continues to lengthen. While today’s F-15s and F-16s can control airspace over Iran, they will become increasingly vulnerable to integrated air defense systems.

Nevertheless, the land-based capacity of the U.S. Air Force provides comprehensive power projection in the Persian Gulf region and greater inherent flexibility than naval assets. Land bases may not be mobile, but the Air Force’s presence in the Gulf is significant and unlikely to disappear in times of crises. Its bases provide nearly unlimited capacity for supplies; multiple airfields provide flexibility, and long-range capabilities ensure strategic reach from the continental United States. There may be concern that having only one carrier — even temporarily — in the Gulf weakens the United States ability to influence events and strike if necessary, but that fear is misplaced. The assets of the U.S. Air Force, as a crucial part of a joint operating force, ensure that America can respond to any contingency.

Michael Auslin, an expert on Asian security and politics, is a scholar at the American Enterprise Institute think tank in Washington.