PARIS AIR SHOW: Of the two predominant conventional threats to the United States — Russia and China — the Peoples Republic of China is the lesser known and has offered much the smaller profile at the international air shows.

Partly, that’s because much of China’s military hardware has, until very recently, been largely Russia-derived. So, the argument went, who would want to buy a copy of something we could buy ourselves? Then there was the fact that the Chinese military sometimes supplied equipment to the very few militaries with which it was friendly, but it very rarely sold them anything that would appear at an air show. 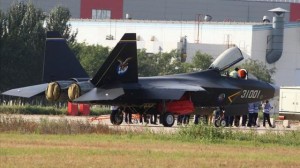 I decided to track down their relatively small booth at the show this year after there were garbled reports that their “fifth generation fighter,” the J-31, would appear at the show.

They DID send the J-31, but it’s only a model. We don’t know much about the aircraft, beyond it’s supposed to be stealthy, highly maneuverable and looks a great deal like the F-35. There’s speculation that China may want to turn this into an export competitor to the F-35, which might make sense given the model’s appearance. Then again, who really knows at this stage?