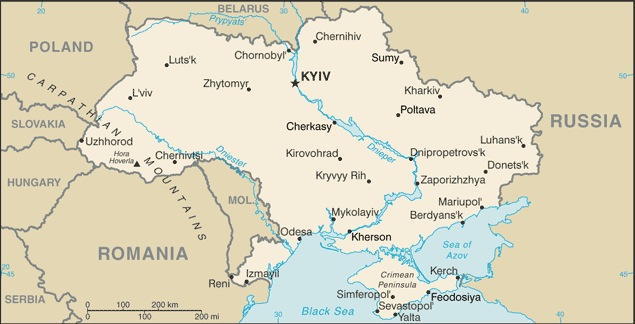 The Crimean crisis continues to escalate. Ukraine’s interim government in Kiev and every country except Russia refuses to recognize the Crimean referendum. Ukraine’s interim defense minister Igor Tenyukh called on Ukrainian troops based in Crimea — some barricaded on their bases and some now held hostage by Russian forces — to prepare for war just as some in his government called for them to withdraw.

Russia, which continues to deny it has any troops in Crimea, announced a ‘ceasefire’ that ends today, March 21. Meanwhile, Russian forces — an estimated 10,000 ground and air assault troops, with columns of tanks and helicopters — are mobilized along the eastern Ukrainian border in the Russian provinces of Rostov, Belgorad, and Kursk. The US and the European Union (EU) announced sanctions against Russia on Monday and Washington beefed them up on Wednesday, they will have no immediate effect.

Urgent steps need to be taken to avert war.

As difficult as it may be at this juncture, the US and Europe should regard the fait accompli occupation and annexation of Crimea and the ‘cease fire’ not as an ultimatum, but as an offer.

Putin is clearly not interested in ‘saving face’ or taking condescendingly-named ‘diplomatic off-ramps.’ But he has mentioned his consistent interest in returning to the EU-brokered “Maidan Accord” of February 21—-the symbolism of the expiration of the ‘ceasefire’ one month later should be lost on no one– which he maintains was violated by the protesters when former Ukrainian President Yanukovych fled Kiev under threat of harm.

Transparent on nothing else, Putin has been straightforward on this issue, claiming the ‘putsch’ in Kiev sought to resolve by force the identity of a complicated and divided nation of 46 million people. As hard as it may be to acknowledge, he has a point. Ukraine straddled the boundaries of Russian empire, fought on different sides of World War II, suffered the death of 10 million people at the hands of Stalin’s famine, speaks two different languages, and celebrates at least two different cultural heritages. As widely as Ukrainians came to despise Yanukovych for his incompetence and corruption, they were far from united about what happened next.

Further, Putin—and many Russians—feel that western-supported ‘colored revolutions’ in the region have not been driven by or produced more democracy, but were a series of extra-constitutional changes in government that violated key precepts of democracy. While Putin’s concern with democracy is ironic, and his ability to recognize these uprisings as rejections of Russian imperial legacy limited, his judgments about these events have made him and many Russians profoundly cynical about Western interests and actions throughout the region.

Given this, the trans-Atlantic community should respond to the ‘ceasefire’ with a more realistic diplomatic agenda. A reformulated diplomatic initiative would have three principal elements.

First, it would acknowledge the extraconstitutional nature of the interim Ukrainian government. While Putin’s agenda and actions may be completely invalid, his claims about the undemocratic way in which Yanukovych was ultimately driven from power are not completely baseless. Further, one of the main messages he is communicating by his actions in Crimea is that two can play at that game. While the US and the EU may have been premature in rapidly embracing the new interim government in Kiev, they feared that without recognition there was a threat of a collapse in civil authority.

Now that that immediate threat has passed, the US and the EU should support rapid creation of an international multilateral contact group. It must include Russia, as well as the interim Kiev government and the Crimean government. By internationalizing the situation and focusing on building a common pathway toward the May elections, the US and the EU can make it easier and more attractive for Russia to participate in diplomatic efforts to resolve the crisis.

The US and the EU could use this forum to communicate the importance of seeing the interim government work towards a negotiated settlement with all of Ukraine. Given that Yanukovych’s own party, the Party of Regions, has already disowned him, this process could produce some fascinating outcomes. Giving Putin some claim of influence on the composition of the Ukraine government will no doubt anger the interim authorities in Kiev, as well as open the door to negative Russian influence on the stability of the interim government, but these are risks worth taking.

Second, to clear up uncertainty about the trans-Atlantic community’s strategic orientation, the US should work with its allies in NATO to build consensus for an immediate announcement by the alliance that NATO membership will be extended to Montenegro and Macedonia and make the commitment to a Membership Action Plan for Georgia at the NATO summit in Cardiff. All of these countries have worked diligently to meet their obligations as described by NATO and earned this distinction.

Putin’s behavior suggests he harbors ambitions that are bigger than both Crimea and Ukraine. He increasingly seems determined to attempt to puncture the idea of a peaceful, united trans-Atlantic community. The United States and Europe should recalibrate its responses on this basis and focus on restoring direction, solidarity and a common voice to the pan-European security alliance.

While there has been recent commentary by Henry Kissinger and others asserting that the expansion of NATO somehow caused this crisis, the more likely explanation is that the crisis was precipitated by Western indecision. The lack of clarity going into and coming out of the Bucharest NATO Summit in 2008 created uncertainty about the US and Europe commitment to a robust and vibrant collective security alliance open to nations that meet its requirements.

This uncertainty invited Putin to test NATO’s resolve, ultimately leading to the Russian invasion of Georgia several months later. Both expansion and ‘Finlandization’ are defensible strategic options; holding patterns are not.

While strategic indecision invited Putin’s aggression, many see no reason Putin would accept NATO expansion now. But Putin must be made to pay a cost for using force to change international boundaries in flagrant violation of the post-World War II order. While Crimea’s current boundaries may be drawn in 1954 by Khruschev, the border between Poland and Ukraine is, like many international borders, largely arbitrary and modern–essentially drawn by Stalin. The international community cannot allow them to be casually redrawn. Accepting NATO expansion for Macedonia, Montenegro, and Georgia is an appropriate, bloodless cost to impose on Putin.

Third, the NATO allies should announce that, while NATO is moving forward with expansion on Macedonia, Montenegro, and Georgia, it will not immediately include Ukraine. This should be explained as a ‘cooling off’ period during which Ukraine must be given time to finalize its consolidation as a new government and figure out its own strategic orientation. Such a suggestion would be a counteroffer to Lavrov’s demand that Ukraine’s neutrality be permanently acknowledged and supported by the UN Security Council.

The US and the EU should make clear they are not abandoning Kiev and it must be clear that the door remains very much open to Ukraine. But it should also be clear that the decision to join NATO needs to be a democratic one, supported by a majority of the entire population. Further, to be considered for NATO membership, Kiev needs to address endemic challenges with governance and corruption that will not disappear overnight.

These compromises would allow Putin to claim that he had ‘saved’ Ukraine from falling to the West. In reality, it would force Kiev to focus on necessary democratic processes and reforms and postpone the strategic contest to a time when a consolidated Ukraine will hopefully be better equipped to pursue a closer alliance with the West.

Fast-moving events, radically different political perspectives and strategic indecision helped create this crisis. However, a rapid roll-out of a more realistic diplomatic approach — an approach where everyone will have to make compromises — could avert war and bring this crisis to an end that everyone could live with.

Sally Painter, cofounder and chief operating officer at Blue Star Strategies, LLC, is also a member of the board of the US Committee on NATO.

Job Henning is a senior fellow at the Center for the Study of the Presidency and Congress and a Truman Project Fellow. He co-chaired a series of future security environment analyses on Eurasia for Andrew Marshall’s Net Asessment office and for the National Intelligence Council.