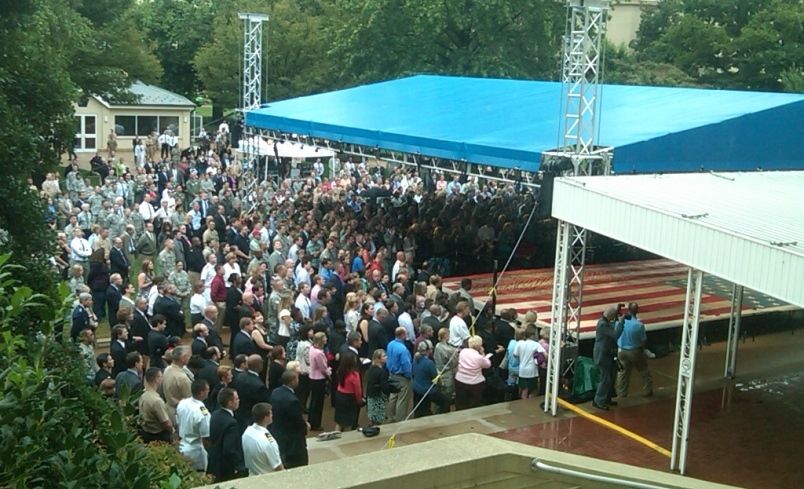 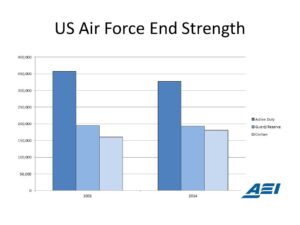 President Obama has set in motion a plan to cut the rolls of the uniformed forces, mostly Marines and soldiers, by about 7 percent (the Army is to be cut to as little as 420,000 to 450,000 active duty soldiers under the president’s budget request). The 2015 defense budget request continues to reduce active duty forces quickly, and continuing cuts mean that the National Guard and Reserve rolls are also falling—albeit less than the active component.

Meanwhile, the Pentagon civilian workforce has grown by some 13 percent over the same time frame. From 2001 through 2010, the only employee group in the Department of the Navy that grew was civilians—by nearly 8 percent. 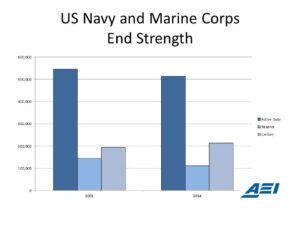 This unbalanced approach to defense spending priorities reflects a broader problem within the administration of favoring one workforce over another and an inability to “rightsize” personnel to best execute the missions of the Department of Defense.

Despite several attempts, the Pentagon has yet to deliver on a holistic and transformational reform program that addresses true overhead growth. They should start with the civilian workforce. One very good reason: according to CBO calculations, the rising costs of civilian pay account for two-thirds of projected growth in operations and maintenance spending from fiscal year 2013 to 2021.

Protecting this workforce breaks with historical trends. The number of defense civilians correspondingly—and appropriately—falls when the size of the US military (and the defense budget) shrinks during a drawdown.

In the 1990s, the Pentagon civilian workforce was reduced by 38 percent. This highlights the relative modesty of recent proposals, including one by California Republican Rep. Ken Calvert, to shrink the defense civilian workforce by just 15 percent in coming years. More important, a lack of adequate matching of the uniformed and civilian workforces makes little strategic sense since they are often intrinsically linked and must be considered side-by-side when smaller budgets mean changing objectives.

Part of the problem is lack of data. Rightsizing this large bureaucracy cannot be done without forethought and planning, but DoD currently lacks many of the tools to do so effectively. The Pentagon lacks a department-wide process to match the supply and demand of labor to plan workforce requirements. While it has examined existing and future skills and competencies for 21 of its 22 mission-critical occupations, competency gap assessments have been conducted for only eight. This means that DoD knows what general skills are necessary for different professions but cannot match the supply of the workforce to the demand for individuals with particular skills. Complicating the issue even more, manpower estimate reports are generalized and not broken down into specific categories like grade, occupation, or skill-level requirements, making it difficult to create a department-wide framework.

Despite guidance that requires that missions be accomplished with the least cost, incomplete personnel data means that DoD does not currently employ the right mix of military, civilian and contractor workforces. The last of these categories is especially problematic, as the Pentagon is still years away from having a database that lists contracted services and currently does not know how many contractors perform work for the Department of Defense.

The Secretary of Defense has proposed some progress in correcting the lack of data on personnel requirements, but much more needs to be done quickly. Mr. Hagel should implement a recent proposal from the Defense Business Board to expand the 20 percent headquarters staff reduction initiative across the entire Defense Department.

Secretary Hagel should also heed lessons learned from the last defense drawdown to ensure this time is different. He must orient civilian worker reductions toward shaping the makeup of the force. Last time around, the Pentagon had poor data, over-relied on hiring freezes and failed to produce a strategy for avoiding skill imbalances and other negative effects of downsizing.

The favored solution of cutting combat forces while holding the civilian workforce steady is the wrong answer. So long as the civilian and uniformed workforce are inversely related, the bill payer will always be the latter. The Pentagon and Congress must get serious now about shrinking the almost-800,000 large Defense Department civilian workforce.