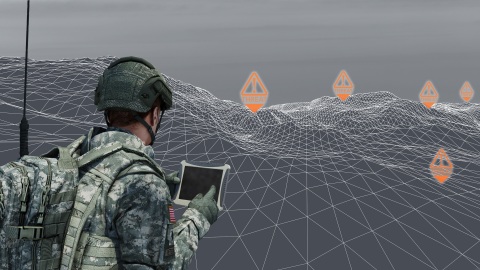 BAE Systems has been awarded a DARPA contract that may help address one of the most pressing threats the US Army has identified — Russia’s increasingly impressive and powerful use of Electronic Warfare on the battlefield.

The technology for a new handheld tactical sensor that soldiers can easily carry to monitor and analyze the electro-magnetic spectrum on the battlefield was developed under DARPA’s Computational Leverage Against Surveillance Systems (CLASS) program and the Cognitive radio Low-energy signal Analysis Sensor ICs (CLASIC) program.

As Sydney has reported, the brand new Army Rapid Capabilities Office is studying proposals to spend between $50 and $100 million on urgently needed electronic warfare gear. Those options include sensors to detect radar and radio signals, and jammers to block them, mounted on ground vehicles, soldiers’ backpacks, and drones. It’s unclear at this point whether the DARPA system might be considered by the Army’s RCO.

The system is part of a wider effort by BAE Systems to develop something close to the heart of Deputy Defense Secretary Bob Work’s Third Offset, a system using artificial intelligence to read and analyze an enemy’s communications and EW emissions, providing soldiers at the tactical level with tools to manage something that used to be handled back in the command center.

Key to this is work BAE Systems has done to greatly boost the efficiency and power of microprocessors and to build in algorithms that create “systems that leverage as much knowledge as possible ahead of time,” instead of forcing a system to rely on highly classified traditional threat libraries, Joshua Niedzwiecki, director of BAE’s sensor processing and exploitation, says.

BAE Systems calls these “cognitive processing algorithms.” One of their key functions is to rapidly comb through the EM soup, identify the wavelengths and their signal strengths and other characteristics and tell the soldier how they can countered or evaded.

A BAE statement says the new gear “can quickly detect and identify multiple interfering signals, such as jammers or enemy communication signals, across a wide spectrum and in changing and challenging environments.” The company says that “the new technology successfully detected and identified more than 10 signal types across a wide bandwidth in the presence of interference” during recent field tests.

One of the drivers forcing this work is the increasing ease of building software reprogrammable radios and related systems, Niedzwiecki said.