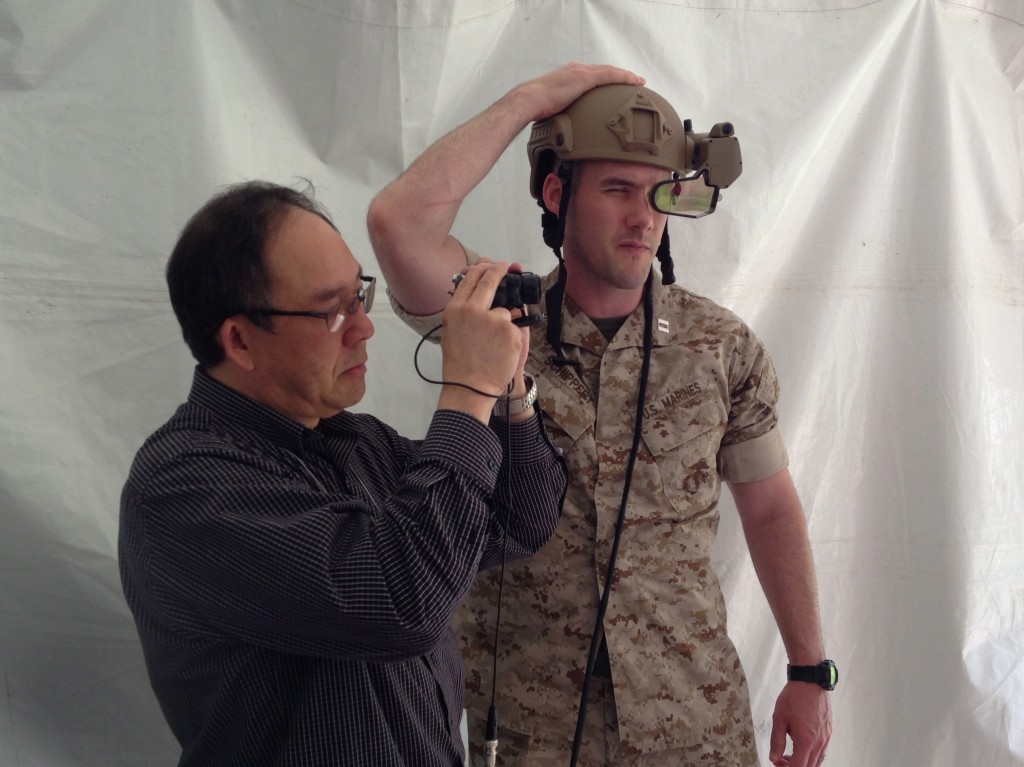 A Marine Captain and a BAE contractor with DARPA’s prototype ULTRA-Vis helmet display.

PENTAGON: After 20 years of unsuccessful efforts to produce a wearable display to provide foot troops digital data without blocking their view of the real world around them, DARPA has invented one called ULTRA-Vis.

“The prototype was completed within the past several months. The breakthrough [was] the holographic wave guide” program manager Yiftach Eisenberg told me as he displayed an admittedly clunky demonstration model at this afternoon’s “DARPA Demo Day” in the Pentagon courtyard.

Yes, he said “holographic,” but no, the wearer doesn’t see a three-dimensional image hovering in front of him like Princess Leia in Star Wars asking Obi Wan for help. The holographic wave guide is a system of channels etched into high-tech coatings on the glass. Those channels convey light from a 0.3-lb projector mounted on the side of your helmet — the prototype is awkwardly unbalanced — to the display over your eye.

That makes it possible to superimpose data directly over your natural field of vision, without requiring you to look up at an eye-straining angle as with Google Glass or look down at a smartphone display as with the Army’s Nett Warrior system. Nor does the display block your field of vision like the ill-fated monocle display on the Army’s earlier Land Warrior.

Instead, you get an augmented reality effect where the data you desire — say, the direction to the nearest friendly unit or your objective — floats over the landscape. The indicators move to stay superimposed over the correct place in the real world as you turn your head, because the helmet-mounted device tracks the direction you’re looking as well as where you are. If there are friendly forces on the other side of the hill, their icon will stay over that hill. A flattened ring on the bottom of the display gives a compressed 360-degree view so you can see if what you’re looking for is currently behind you. (Fighter pilots have long had such “heads-up displays,” but it’s a lot harder to implement in something compact enough to wear).

“The technology is agnostic” about what data it displays, Eisenberg said: As long as you have geographical coordinates, you can see it superimposed on your environment. The display can even display digital pictures and video — for example, surveillance imagery from a drone — although I found those harder to see.

“We’ve taken it to a prototype stage,” Eisenberg emphasized. He doesn’t expect anyone to go to war wearing something exactly like the kit he showed me today. His program is working with the individual armed services to figure out the “refinements” they’d require to incorporate the technology in their future systems. To start with, you don’t want to crack the display the first time you hit the dirt. “There certainly needs to be more work to ruggedize the technology,” he told me. “That’s the next step.”