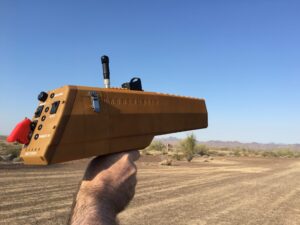 The military is devoting more and more attention to the threat of hostile drones on the battlefield, but what to do about the dangers posed by tiny micro-drones, especially in urban areas, where simply shooting them down isn’t usually a good option? Eight finalists in a technology challenge sponsored by the Department of Defense, Department of Homeland Security and the Federal Aviation Administration will compete their proposed defense systems Aug. 12-19 at Marine Corps Base Quantico, Va.

“Not to give the bad guys ideas, but it’s very easy to put these things in a backpack and carry them wherever you want and set them up and launch them,” said Duane Blackburn, a science and technology policy analyst for MITRE, a quasi-federal, not-for-profit corporation that devised and is running the Counter-Unmanned Aerial Systems (C-UAS) Challenge.

The finalists, chosen from 42 entrants who submitted white papers, range from small startup companies to Lockheed Martin Corp., which will demonstrate its ICARUS anti-UAS system. The counter-drone schemes they will demonstrate range from a handheld jammer called Dronebuster, which the Air Force is already using to defend some nuclear bases, to elaborate systems of sensors and other hardware that promise to detect, identify, track, disrupt and even take control of unidentified drones. 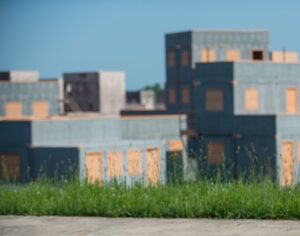 The finalists will have to prove their claims against drones flown at the Urban Training Center at Quantico, a set of crude buildings usually used to train marines to fight in cities. The winners won’t get any federal contracts – at least not directly – but MITRE will give the owners of the best end-to-end system $60,000 and award $20,000 each to the best detection system and best interdiction system. One entrant could take all three prizes. The main idea, Blackburn said, is to stimulate inventive counter-drone technology.

The MITRE challenge echoes more elaborate efforts the military has pursued for years, first in a joint annual exercise called Black Dart and more recently in a series of tests conducted by the Army Rapid Equipping Force called Desert Chance. But unlike those events, MITRE’s C-UAS Challenge is focused exclusively on micro drones, defined as those that weigh less than five pounds. And unlike the armed services, which are testing lasers and other weapons to shoot drones down, MITRE wants only solutions that can be used in crowded cities without collateral damage.

Coming up with ways to deal with the small drone threat is among the trickiest problems military and security agencies face these days because the devices are so small, so easy to use, and are proliferating so rapidly. More than 700,000 small drones were purchased in the United States last year, according to MITRE. The FAA has just issued regulations that will take effect Aug. 29 governing those weighing less than 55 pounds, but terrorists and criminals don’t care about regulations, and ignorance among innocent drone users is an even greater threat.

On the battlefield, “counter-drone is all about bad actors putting explosives onto drones or spying on FOBs (forward operating bases), which is a real threat, but there is this whole huge giant missing piece in the counter drone movement, which is just counter drone-stupidity,” said Jacob Sullivan of Radio Hill Technologies, a Portland, Ore., company among the finalists in the MITRE challenge. “We’re capable of damaging ourselves a lot without any bad intent.”

Airline pilots the world over have reported seeing small drones flying dangerously close during take offs and landings. Small drones flown over sporting events have fallen into crowds, causing injuries, as happened June 11 to a woman at a 5K race in Quebec. Last weekend, drones flying over wildfires in California interfered with airlifts of firefighters and water drops by tanker aircraft.

If caught, the operators of those drones would be subject to charges and fines, but therein lies part of the problem. It can be exceedingly difficult to detect, identify and track small drones – especially micro-drones – and even harder to trace them back to their operator.

MITRE (whose name is a meaningless non-acronym) and the sponsors of the C-UAS Challenge decided to focus on micro-drones because, “If you look at what’s happening in homeland and national security and terrorism and all that, the big threat we’re really scared about is not a nation coming at us with all their nukes, it’s a lone actor doing something stupid,’ Blackburn said.

There’s also the problem of how to deal with small drones once you have a bead on them. “You can’t just shoot down something above the Super Bowl,” Blackburn said.

One  finalist system, SkyWall 100 from Open Works Engineering of Riding Mill, England, promises to bring down targets with a net that deploys from a projectile fired from a compressed air shoulder launcher. The net grabs the drone, a parachute deploys, and both float gently to the ground, as in this marketing video:

A more intricate solution is being offered by Department 13 International Ltd. of Falls Church, Va., whose MESMER software hacks and alters a target drone’s radio frequency protocols — something hard for the target drone operator to detect, according to company founder Robi Sen – and tames it, in essence.

“MESMER comes from ‘mesmerize,’” Sen explained. “Once you’ve got that drone, you own it.”