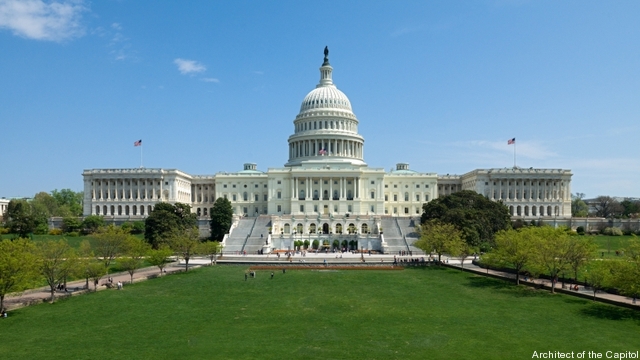 WASHINGTON: While the House has voted to extend the debt limit to May, the automatic federal spending cuts called sequestration still loom $90 billion large, half that bill for the Pentagon alone. Yet, as fourth quarter earnings calls begin, the defense industry and its stock values remain remarkably resilient.

What gives? Or rather, what isn’t giving way, and why?

Consider General Dynamic , a prime contractor on Pentagon projects from the Army’s armored Stryker vehicle to the Navy’s Littoral Combat Ship, with over $30 billion in annual revenues. GD’s stock stumbled four percent this morning on news the company had taken a $2.1 billion fourth-quarter loss, far below expectations, yet after new CEO Phebe Novakovic explained the company’s increased conservatism in her first earnings call, the market rapidly regained confidence.

“The stock tells the story,” said Byron Callan director of Capital Alpha Partners, in a conversation with Breaking Defense shortly after Novakovic’s conference call. “It’s recovered all it lost.”

What’s more, Callan argued, General Dynamics’ troubles are largely self-generated and sui generis, the result of overly optimistic expectations for their Information Systems and Technology (IS&T) division – expectations that new management under Novakovic has now wisely revised – rather than being symptomatic of deeper problems defense industry-wide.

“These stocks didn’t really seem to be impacted by the last drama we just went through,” Callan noted, referring to the year-end drama over the “fiscal cliff” that was resolved – sort of – on New Year’s Day. “They generally held steady. Most of these stocks, at least the large companies, finished close to their year highs.” Three weeks later, he went on, “they’re hanging in there.”

The irony here is that the whole sequestration/fiscal cliff/March Madness debate started with dire warnings about the impact on the defense industry. Those national security-specific concerns were then overshadowed as winter came in by the end of the Bush-era tax breaks and the possibility of the federal government defaulting on its debt, both of which had far wider economic implications. Now the Jan. 1 deal has rescued most of the tax breaks and today’s vote takes away the pressure of an impending default. With sequestration still out there, the story is circling back to the impact on defense.

But what is the impact, actually? Sequestration, as written, would certainly be a mess. But it might be survivable.

By automatically slicing the same percentage from every non-exempt account – for the Defense Department, about 8.8 percent out of everything from weapons procurement to healthcare for troops’ families – the sequester mechanism leaves no room to set priorities or seek efficiencies. The military is already looking to economize on readiness activities like training and maintenance, a particular worry for the Navy. And while the Pentagon says contracts already on the books are sacrosanct, ongoing negotiations would be thrown into disarray and some deals already signed might need to be renegotiated.

“There won’t many be terminations, if any, because of the first year of sequestration [because] no account is getting cut to zero,” said Todd Harrison of the Center for Strategic and Budgetary Assessments in a recent briefing. “What you’d have to do [instead] is renegotiate the rate at which you’re going to buy.”

Efficiencies of scale would be lost as quantities shrank: Cutting a contract’s dollar value by 8.8 percent reduces the amount the military can buy by a lot more, Harrison warned. Companies might take advantage of the Pentagon’s weakened position to get better deals. And the civil servants who have to figure all this out will be subject to rolling month-long furloughs that send a seventh of the federal workforce home at any given time. So, sighed Harrison, “this is going to be a contracting nightmare.”

In the worst case, the Pentagon might have to pay “termination for convenience” penalties for breaking existing contracts.

“It depends on how individual contracts are handled,” said Dan Stohr, spokesman for the virulently anti-sequestration Aerospace Industries Association, in a recent conversation with Breaking Defense, “but it is very possible in the process of slowing down or cancelling contracts to meet the sequestration goals that they would incur significant costs…which in turn mean you would have to cut more.”

But not all defense contractors are affected equally. The big prime contractors like General Dynamics, Lockheed Martin, and Northrop Grumman are fairly well insulated, not just by their cash reserves but by time: Weapons programs take so long, and funds obligated on contracts are paid out so slowly, that the primes are largely running off money Congress obligated a year or more ago, funds unaffected by sequestration. (Boeing, the no. 2 defense contractor, has the added protection of a booming civil airliner business).

So even if sequestration does strike the primes, said Callan, “it really shouldn’t do all that much to 2013 earnings expectations. But it really should kick them in the shins – and maybe someplace else – in 2014-2015.”

Smaller companies that supply components or services, by contrast, will quickly get it in the teeth.

“In some ways this is similar to what we saw happen in the auto industry over the years, where demand drops down and the real belt tightening starts happening at the tier one, tier two suppliers,” said Elliot Fuhr, senior managing director at FTI Consulting, in an interview with Breaking Defense. “It’s more trickle down from the inner” – the primes – “going to the outer” – the suppliers.

That includes both companies that provide physical components to the prime contractors and companies that sell them services, since consultants are far easier to cut than one’s own employees. But the impact will vary widely from company to company, said Fuhr: “It’s contract by contract specific as to whether you’re impacted or not.”

But even smaller firms can take steps to protect themselves, Captain went on. Aerospace parts and services companies can sidestep from the struggling defense sector to the booming civil aviation world. Companies that sell information technology, cybersecurity, “big data” analysis, and even intelligence, surveillance, and reconnaissance (ISR) gear can likewise translate their core competencies to civilian markets in a way that builders of army tanks and submarines cannot.

Perhaps the best sign of a firm adapting well, said Captain, is that “they are pouring money into research and development for next generation weapons capability,” especially ISR and cybersecurity. While it’s easy to cut long-term investments to cope with near-term pressures, “it’s eating your seed corn when you don’t continue to invest in research and innovation,” he said. “If you don’t innovate, it’s hard to grow.”

“Those innovative companies that are spending on research and development,” Captain said, even in these tight times, “are skating to where the puck is going to be, not where it is right now.”

The fact that companies can take steps to protect themselves from defense cuts, however, hardly means those steps aren’t painful. “Every day I pick up the newspapers,” said Captain, “another company’s laying off defense workers.”

There is a wide consensus that defense spending will be cut further, whether under the terms of sequestration or as part of a bargain to avert it. The as-yet unanswerable question is how much.

Breaking Defense’s sources could not even agree whether Washington can turn the sequestration mechanism off and substitute a more rational kind of cuts, where Congress and the Administration can pick and choose rather than slice everything evenly and arbitrarily.

“Once Congress understands the local impacts of sequestration on depots and defense plants, it will back away from formulaic cuts,” said Loren Thompson, a consummately well-connected defense analyst and consultant, as well as a member of the Breaking Defense Board of Contributors. “It will find some way of providing the Department [of Defense] with flexibility.”

“When people really stare this thing in the whites of its eyes, they’re going to be reluctant to pull the trigger,” agreed Byron Callan.

McKenzie Eaglen of the American Enterprise Institute, another AOL contributor, was similarly pessimistic that sequestration could be averted. “A growing chorus of members are saying it’s likely, including staunch conservative GOP members,” she told Breaking Defense. Republicans feel they’ve already given ground by allowing tax hikes, by reducing the amount of the sequester, and by deferring the debt limit: They won’t move further, she said, without politically unlikely concessions from Democrats on entitlements.

“There is a misperception in this town that the Republican Party’s going to save the military and defense from sequester, and the political dynamics of that have changed dramatically in the last three months,” said McKenzie, a well-connected conservative and former GOP Hill staffer herself. “They aren’t – and who else will?”