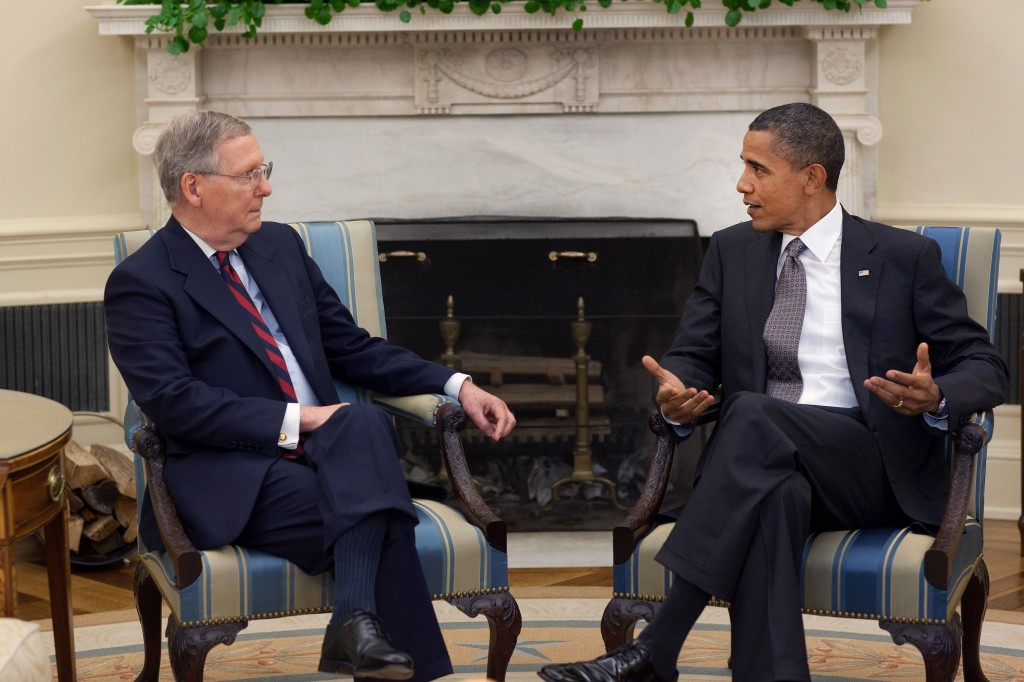 President Obama and Sen. McConnell. Perhaps a new shot will have a bottle of bourbon on table between them.

SAN DIEGO: How much Kentucky bourbon will it take for President Barack Obama and presumptive Senate Majority Leader Mitch McConnell to come to an agreement of some kind on how to alleviate sequestration?

A few drinks in the Oval Office? A bottle between them up in McConnell’s Capitol eyrie? And what about those new Republicans coming to the Senate for the first time come January, and the less moderate Democrats left in the Senate chamber, who still must be won to do the nation’s business?

The good news is it looks as if the most committed deficit hawks have been curbed, culled from the GOP, or learned the realities of governing the hard way, which eases the pressure to shut down the US government or take other damaging and irresponsible steps. McConnell pledged no default on the US debt during a press conference hurriedly called before President Obama addressed the nation after the historic drubbing Republicans handed to Democrats last night, leaving them with what may be the biggest congressional majority since at least President Harry Truman.

We may be facing one of those moments where only the party that opposes a policy publicly has the political capital to change it, a la Nixon and China.

“Congressional Republicans, fresh on the heels of historic gains on election night, will not play the role of the Grinch and shut down the government in December,” Josh Holly, a lobbyist at the Podesta Group and former spokesman at the House Armed Services Committee says in an email. “There are too many challenges waiting to be addressed: the sequester, the debt ceiling hits around March, Ebola on our shores, terrorists consolidating gains in Syria and Iraq, a military under strain, and the list goes on.”

There were very encouraging noises from the GOP leadership that appear to support Holly’s assessment. “It’s time for government to start getting results and implementing solutions to the challenges facing our country, starting with our still-struggling economy,” House Speaker John Boehner said in a statement today

Holly and Mackenzie Eaglen, defense analyst at the American Enterprise Institute (which has worked quietly but hard to draw the venom of the Tea Party from the GOP body politic) both say the chances of a mini-deal on sequestration are much improved.

“One result of last night’s election is that a window could open in early 2015 for President Obama to work with the new Republican Congress to address a number of these challenges, including an agreement on topline budget authority that buys back some of the cuts mandated under the sequestration cleaver and provides a structure for tax reform as part of the debate to raise the debt ceiling,” Holly says. “The hundred-thousand-dollar question is whether our leaders will walk through the open door hand-in-hand or get cold feet at the threshold of trust.”

McConnell, appearing relaxed and remarkably comfortable with reporters, had clearly abandoned the role of the last few years — grumbling a lot, threatening the White House and saying little to reporters — said Obama is “going to have a Congress that is more challenging to him, but I’m hoping we can be productive.” He spoke of the president’s position with respect. noting the “power of his veto pen.”

President Obama made his position moderately clear: “I’m eager to work with the new Congress to make the next two years as productive as possible.” There were caveats but the commitment to compromise appeared genuine. And Obama noted the budget compromise engineered by Rep. Paul Ryan and Sen. Patty Murray as a possible model for everyone to follow .

But the question remains: how much bourbon will it take?

For those who wonder whether the bourbon lobby stands ready to serve its country and help us avoid another idiotic threat to our credit rating, jobs and credibility, we offer this nugget courtesy of the Courier-Journal, the hometown paper of Louisville, Ky:

“Since the days of Henry Clay, Kentucky bourbon has been used to lubricate the wheels of government in Washington,” the paper quotes Eric Gregory, president of the Kentucky Distillers’ Association. “We stand ready to supply this meeting and serve our country as America’s only native spirit.”

Shall we raise a glass to compromise and governance?