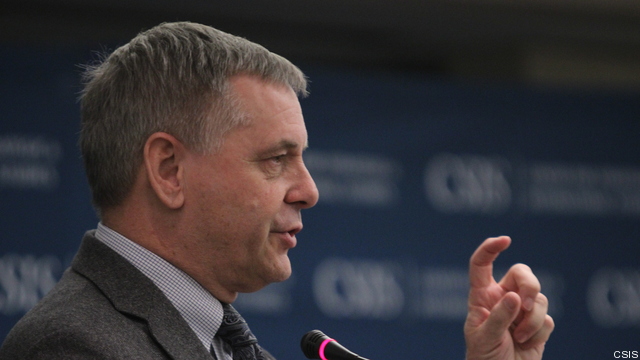 WASHINGTON: You didn’t hear much about them during the wars in Iraq and Afghanistan but DARPA, small businesses, and universities were the people who most impressed retired Gen. Hoss Cartwright when he was vice chairman of the Joint Chiefs of Staff, as he and the services scrambled to find weapons to give American troops a combat edge.

“DARPA was incredible to our ability to gain advantage. Small businesses and universities were hotbeds of innovation for us,”  Cartwright said during a panel at the Center for Strategic and International Studies on lessons learned from the last dozen years of war. He made no mention of Lockheed Martin, Boeing, or BAE Systems — or any of the other large defense companies.

What made them special? “Their willingness to take risks… made a huge difference and saved countless lives on the battlefield,” Cartwright said. And he said that in Afghanistan and (previously) Iraq, “[the] battlefield is not driven by platforms” — tanks, ships, planes — which take so long to design, build, and deploy.

Another avenue of innovation at the Pentagon sprang from the acquisition processes of Special Operations Command (SOCOM), which has the right to just buy things in small quantities if it really needs them.

The SOCOM acquisition system “taught us a lot,” former Army Vice Chief of Staff Gen. Pete Chiarelli told an audience of several hundred at CSIS this afternoon. That experience — which occurred only because of the unprecedented integration of regular Army and SOCOM forces in the field — led to creation of the Rapid Equipping Force in 2002. With its eye mostly on commercial items, gear produced by the Defense Department or on things that could be rapidly prototyped, the REF become a regular source of Army gear that helped troops on the front lines. Equipment had to be ready in two years from the time a requirement was crafted, forcing the service to move sharply and to buy things that wouldn’t fit in the usual acquisition scheme where a major weapon often takes between 15 to 20 years to make it to the battlefield.

“It broke all the congressional rules because you were going out and finding things and you didn’t care which congressional district they were in,” Chiarelli noted.

But these weren’t the only lessons learned during the last 12 years. Chiarelli cited the “unprecedented integration” between the regular Army and SOCOM. Cartwright, now an analyst at CSIS, focused on the remarkable targeting and planning made possible by the blurred lines between the Intelligence Community and the military.

“We could move between Title 10 (the laws governing the regular military) and Title 50 (the laws governing the Intelligence Community) and the State Department at the speed of light,” the former Marine general said. But that meant — and still means — that congressional oversight suffers because figuring out just which committee oversees which actions got blurry.

“Where was the oversight? it certainly wasn’t: we’ll do this for a week or two and then go up and brief the Hill on this,” he said. So I asked Cartwright if he thought that the landmark Goldwater-Nichols Act, which is the backbone of much of Title 10 now, needed revising or a complete rework.

Basically, he said that it will need revising over time and with great consideration.

Best line from the panel came from Chiarelli: “As you get older, there are very few lessons learned and many lessons observed.”