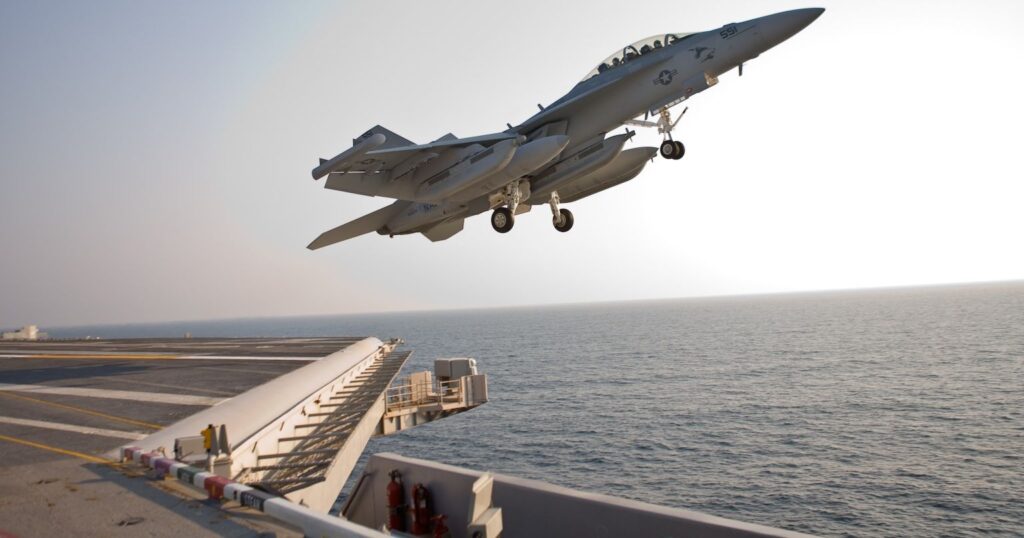 WASHINGTON: Pentagon officials are drafting new policy that would officially recognize the electromagnetic spectrum as a “domain” of warfare, joining land, sea, air, space, and cyberspace, Breaking Defense has learned. The designation would mark the biggest shift in Defense Department doctrine since cyberspace became a domain in 2006. With jamming, spoofing, radio, and radar all covered under the new concept, it could potentially bring new funding and clear focus to an area long afflicted by shortfalls and stovepipes.

The new electromagnetic spectrum domain would be separate from cyberspace, although there’s considerable overlap between the two. “Wireless” is just another word for “radio.” Any wireless network relies on radio frequency transmissions that can be jammed by traditional electronic warfare like any other RF device — or it can be hacked by wirelessly transmitted malware, in a hybrid of electronic and cyber attack. But the consensus among officials and experts seems to be that the electromagnetic spectrum world — long divided between electronic warriors and spectrum managers — is so technologically complex and bureaucratically fragmented by itself it must be considered its own domain, without trying to conflate it with cyberspace.

Cyber has certainly gotten more attention and, often, money than the electromagnetic spectrum. Would making the spectrum a domain fix that? It would not magically manifest the missing $2 billion a year the Defense Science Board says is needed to rebuild American electronic warfare capabilities such as jamming. Nor would calling the spectrum a domain somehow turn back the clock on the 20 years China and Russia have spent catching up while American electronic warfare largely stood still. Nor would it reduce the American military’s dependence on inherently vulnerable wireless networks for everything from commanding troops to sharing intelligence to flying drones to knowing exactly where we are.

But instead of trying to fix such complexly interrelated problems piecemeal, it would help to have a big picture endorsed at the highest levels of the Pentagon. No less a figure than Deputy Defense Secretary Bob Work has chartered an “electronic warfare executive committee” (EXCOM) to advance a “department-wide” approach to the problem.

I first heard of the draft “domain” policy almost in passing during a presentation last week to the Association of Old Crows, an electronic warfare group, by a contractor for Defense Department’s Chief Information Officer. “The policy…is in the works,” said Troy Orwan, a retired Air Force EW officer himself, “and in that policy we are going to ask the Secretary of Defense and the Chairman of the Joint Chiefs, to declare a sixth domain, EMS, to man, train, and equip.”

Yesterday, Pentagon CIO Terry Halvorsen confirmed in a statement to Breaking Defense that his office “will be the Departmental lead for these efforts” to explore a wide range of policy options for the electromagnetic spectrum, “to include the potential recognition of the EMS as a domain.” 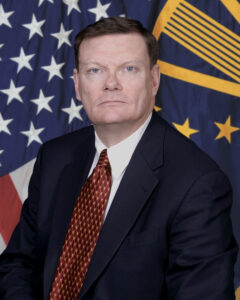 (Read the full statement below).

“They’re careful not to describe the EMS as a domain in their statement,” noted Bryan Clark, a former aide to Chief of Naval Operations and electronic warfare advocate Adm. Jonathan Greenert. “They’re trying to parse their words — I think too much — because they’re worried about the implications if they call the EMS a domain.”

“While there’s no automatic money attached,” Clark continued, “the concern is that by calling it a domain, you create these turf battles over who’s primarily responsible” — as occurred to some extent over cyberspace.

Even acknowledging that potential downside, however, “it’s very encouraging,” Clark said. “Calling EMS a domain [would] be very helpful in guiding our operating concepts.”

Halvorsen’s involvement is encouraging in itself, said David Fahrenkrug, who teaches cyber warfare at Georgetown University. (Full disclosure: I took his course). First, the DoD CIO traditionally stuck to spectrum and network management issues while steering clear of operational issues, which helped create the gap the new policy is trying to bridge. Second, Halvorsen himself was the Navy’s CIO before he was the Defense Department’s, and — especially under Adm. Greenert– the Navy is the lead service in using the electromagnetic spectrum in warfare.

“The Navy understands electronic warfare and its relationship to information warfare and cyber probably better than anybody,” said Fahrenkrug, a recently retired Air Force colonel with no pro-Navy bias.

Certainly Halvorsen’s statement minces no words on the importance of the topic. “The department understands that EMS Superiority is a crucial enabler to achieving superiority in all other domains and must be considered a prerequisite to all successful operations,” Halvorsen said. “The EMS transcends all domains.”

In fact, one critique of the “EMS domain” idea is that it actually understates the importance of the electromagnetic spectrum. You can stage airstrikes without troops on the ground (as we’ve done in Syria until recently), conduct naval operations without land-based air support, or even send in foot troops without air cover. None of these things is a particularly good idea, but they’re physically possible.

By contrast, modern military ships, aircraft, and ground forces cannot operate without using the electromagnetic spectrum. They haven’t been able to do so for about a century. At a very minimum, you need to communicate via radio (unless you want to go back to the World War I days of runners, pigeons, and easily cut telephone cables). US forces today are constantly transmitting and receiving via wireless networks: downloading intelligence from satellites, sharing plans, checking their position on GPS, and so on and on.

“This issue has been simmering for several years now,” said Dave Hime, president of the Association of Old Crows. “Part of that discussion includes whether to treat the EMS as a separate domain, or a critical element of every warfighting domain. The difference may be subtle between these two constructs, but it is a discussion… that needs to take place.”

“I would be hard pressed to show any domain that would not use some form of ESM [electromagnetic spectrum maneuver] to conduct operations,” said Navy Captain Michael Hutchens, who works on the information, operations, & plans section (N3/N5) of the Navy staff. “This subtle difference leads me to the opinion that ESM is inherently different than a domain. During [an AOC conference] panel, I referred to it as a ‘critical capability’ required to successfully operate within one, or any, of the domains. One could make an argument that describing ESM as a critical capability is an understatement.”

Does that make the spectrum unique, though? “All these domains impact the other domains,” countered Clark. “With the reach of precision weapons, the maritime domain and the land domain are not really mutually exclusive any more”: US warships can launch cruise missiles at targets in landlocked Afghanistan, Chinese launch sites well inland can threaten US ships far out to sea. The air domain overlaps both land and sea. Space overlaps them all. Cyberspace extends everywhere a computer might be linked to a network.

It’s worth repeating that a new electromagnetic spectrum domain would remain separate from cyberspace. But the consensus at the Association of Old Crows conference was that cyber and electronic warfare would never completely “converge” into a single entity. EW can deliver cyber warfare payloads much like an Air Force plane can drop paratroopers or a Navy transport can offload tanks, but in each case there are still two different environments — one natural, one human-made — that require two different skillsets to operate in effectively.

“Don’t mess with physics because physics will mess with you, and physics always wins,” said Orwan. “They’re two separate domains.”

So whether or not the electromagnetic spectrum is designated as a domain unto itself, coordinating electronic and cyber warfare will remain a complex challenge. No wonder that Fahrenkrug, among other skeptics, sighs that “domain discussions are red herrings.”

Not so, said Clark. The point of making the spectrum a domain isn’t to emphasize its separateness, let alone to create a separate military bureaucracy to run it, he argued. It’s to force the Defense Department to acknowledge it as an arena of military operations in its own right, with its own unique characteristics to consider. “If you start describing the EMS as a domain,” Clark said, “they start thinking about it as a place where we operate.”

Operating in the spectrum has proven hard enough in peacetime, with the commercial wireless industry successfully pressuring the government to sell off more frequencies where the military could once operate. It got even harder in Afghanistan and Iraq, where the simultaneous spread of wireless command networks and of jammers to disable roadside bombs meant US forces were often inadvertently jamming each other. Now imagine if someone were trying to jam us on purpose.

“If we went to war against a near peer… he wouldn’t have to turn on any jammers, we’d already have problems,” said Orwan. “If he turns on his jammers and starts doing electronic attack, and if he combines that with cyber, wow.”

The Russians have been studying such tactics for a long time, said Thomas Taylor, deputy director for policy, technology and EMS operations for DoD CIO Halverson. Taylor noted that Admiral Sergey Gorshkov, commander of the Soviet Navy for three decades, said that “the next war will be won by the side which best exploits the electromagnetic spectrum.” China is catching up too, Taylor said.

“We need to evolve to one capability where we’re managing the electromagnetic spectrum as a domain…in order to generate EMS superiority,” Taylor told the AOC conference.

So how close are we?

“I wish I could come out and tell you the policy is going to be signed tomorrow and it’s going to declare a sixth domain. I can’t,” Orwan said. “All I can tell you is we’ve been asked to draft a policy and start analyzing the possibility of declaring a sixth domain.”

That will take months or years, he warned. “When you’re talking three services that at times don’t work well together, when you’re talking OSD staff… the Joint Staff and COCOMs [combatant commands], getting everybody on the same sheet of music and taking into account their perspectives is a long process.”

Colin contributed to this article.

The full text of DoD CIO Halvorsen’s statement is below:

In September 2013 the Department released its Electromagnetic Spectrum Strategy, A Call to Action, which presents a framework for how the Department should rapidly adapt to the changing spectrum environment, evolve to electromagnetic spectrum operations and to assess and respond to spectrum regulatory changes. Additionally, the Strategy helped shape the new Joint Concept for Electromagnetic Spectrum Operations (JCEMSO). The Chairman of the Joints Chief of Staff approved this concept in March of this year, solidifying his vision for how the Joint Force will operate in future constrained, congested and contested electromagnetic spectrum (EMS) operating environments (EMOEs) and establish EMS Superiority.

The Department understands that EMS Superiority is a crucial enabler to achieving superiority in all other domains and must be considered a prerequisite to all successful operations. In response to the pressing need to implement both the DoD EMS Strategy and JCEMSO, the Department has taken steps that strive to establish policy and assign responsibilities to achieve EMS Superiority through efficient and effective Electromagnetic Spectrum Operations (EMSO), which will enable the optimization of EMS access and use/maneuver throughout the full range of military operations, and defines EMSO as all spectrum dependent (SD) activities occurring within the EMS.

As part of this guidance, the Department will investigate all requirements and ramifications of its enactment, to include the potential recognition of the EMS as a domain. As the EMS transcends all domains the Department must systematically evolve its capabilities to ensure effective EMS operations. As the Primary Staff Assistant (PSA) to the Secretary of Defense for spectrum, the Office of the DoD Chief Information Officer (CIO) will be the Departmental lead for these efforts in close cooperation and coordination with the all appropriate DoD Components.