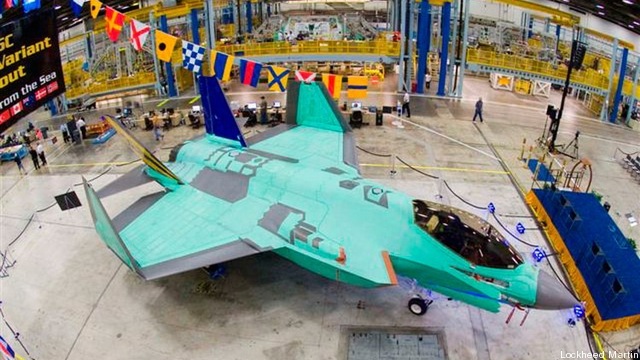 WASHINGTON: It’s finally official. After months of senior program and Pentagon officials saying they were really close to a deal, Lockheed Martin and the Joint Program Office just announced they’ve got agreement in principle for the Defense Department to buy another 29 Joint Strike Fighters.

The eighth Low Rate Initial Production contract includes 19 F-35As, six F-35Bs and four F-35Cs. “It also provides for the production of the first two F-35As for Israel, the first four F-35As for Japan along with two F-35As for Norway and two F-35As for Italy. The United Kingdom will receive four F-35Bs. The contract also funds manufacturing-support equipment as well as ancillary mission equipment.”

The program’s burgeoning maturity is becoming clear, as is its global scale. Although Israel and Japan only announced their intent to buy F-35s recently, they are already getting some aircraft in this lot. As of October 24, Lockheed has delivered 115 F-35s, including test aircraft.  LRIP eight deliveries begin in 2016. That number will top 200 planes once LRIP aircraft are delivered.

The price comes down an average of 3.6 percent across the three airframes, the release from the JPO says. That comes on top of an 8 percent price drop achieved during LRIPs 6 and 7. Those two LRIP buys cost about $7 billion.

The JPO statement notes that results from the much-ballyhooed Blueprint for Affordability won’t be seen until the next contract is signed for LRIP 9.

Meanwhile, we hear that after initial worries that only one F-35C would be ready for arrest testing on the USS Nimitz due to start early next month the program will have two planes ready for testing.

The folks at Lockheed Aeronautics must be high-fiving with the late afternoon news that Lockheed Martin was awarded a $487 million contract to exercise an option year for F-22 sustainment.