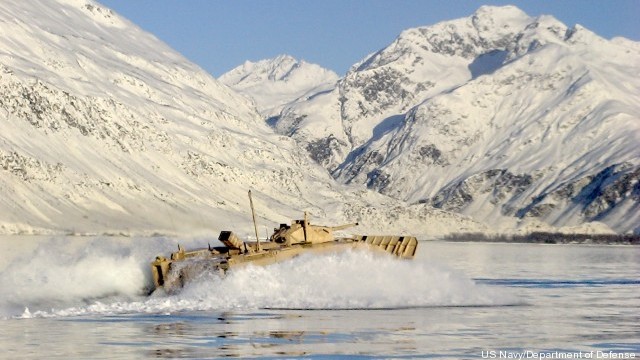 WASHINGTON: The Pentagon thinks it may have found a way to build weapon systems five times faster than it does now and wants to test it with the Marine Corps.

The Defense Advanced Research Projects Agency is seeking industry partners to run the Fast Adaptable, Next-Generation vehicle program. The FANG program will basically use this new acquisition plan to meet the Marines’ requirements for a new Amphibious Combat Vehicle.

In a nutshell, whoever wins the FANG award will end up building little to none of the actual vehicle. The award winner will manage and coordinate a series of prize-based, mini-competitions or “challenges” for each element of the FANG vehicle. The FANG awardee will also “ensure the smooth integration of each step in the end-to-end “make” process,” according to the notice.

The FANG program won’t replace what the Marines are doing now for ACV. Both programs will run side by side, according to the notice. The service will stay on its traditional contract award and development track. The FANG program will be run on this new DARPA-developed acquisition track. Once complete, the Marines will pick which vehicle it wants to move into full production. The agency claims FANG will end up shrinking system development timelines “five-fold,” according to the industry notice released today. Schedule delays and cost growth forced the Marine Corps to cancel the Expeditionary Fighting Vehicle earlier this year. ACV is the Marines’ second attempt to build a combat amphib.

This “challenge” approach has been a staple in various DARPA-led competitions focused at colleges and technical institutions. Three challenges are planned for the FANG program. The first will focus on the vehicle’s mobility and drive-train system. The second will look at chassis durability in a combat environment. The final challenge will integrate the results of the first two and produce a prototype version of the FANG “with the exception of the command, control, communications, intelligence, surveillance, and reconnaissance suite, the battle management system and weapons.”

Competitors will use a modeling and simulation program built by DARPA to develop their proposals in each of the challenges. DARPA has also built an open-source database where potential designs can be shared between competitors and the department. These systems “significantly change the design experience and open the aperture for design innovation,” DARPA claims.

Improving the “design experience” and opening the creative aperture is all well and good. But how will this save the Pentagon and the Marines time and money? Initial research and development costs should drop significantly, since all a prime contractor has to do is pony up the award money for each challenge. Having multiple teams working on a single challenge means multiple design ideas and theories can be tested simultaneously. The trial-and-error cycle that so often bogs down R&D work would be truncated significantly. The prime contractor can skim the best design ideas from the various challenges and put them into the vehicle. In theory, R&D and design integration costs and schedules drop to virtually nothing. Add in DARPA’s virtual design simulation and open-source database, and costs drop even more.

Marine Corps Commandant Gen. James Amos has famously claimed he wants to drive an ACV prototype into the Potomac River before his stint as commandant ends. If FANG works, the four-star general could be in deep water — in a good way — sooner than he thinks.