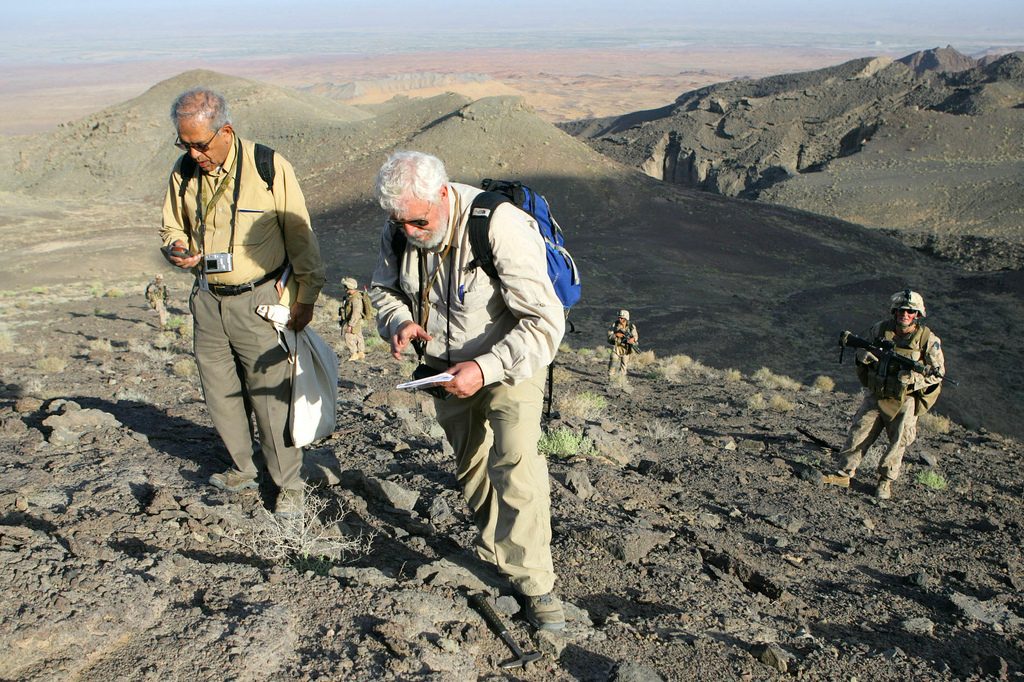 Geologists during a site survey on a hillside outside of Sukalog, Afghanistan, Sept. 20, 2009.  (DoD photo by Cpl. Sarah Furrer, U.S. Marine Corps)

WASHINGTON: The deep dive into the defense industrial base ordered by President Trump is complete, and after a final round of sign-offs from various cabinet secretaries it should hit the streets in the next several weeks, according to several people familiar with it’s progress.

The review promises to be the most thorough look at the entirety of the manufacturing and production of defense materials ever attempted, involving several government agencies, surveys of large and small players in the supply chain, and a study of foreign materials used in the production of American weaponry. The effects of the study, coupled with a related executive order signed by Trump in December, could very well open a new front in the burgeoning trade war with China.

China will likely loom large in the report, given the country’s dominance of the rare earth minerals market so critical to the U.S. defense industry, the pumping of billions in Chinese investments into U.S. tech startup firms, and the increasingly dominant protectionist philosophy of the Trump administration.

Last month, Ellen Lord, the Pentagon’s Undersecretary for Acquisition and Sustainment, said that once her team started taking a hard look at the reliance the American defense industry has placed on China for critical minerals, the results were “quite alarming…we have an amazing amount of dependency on China. We are sole sources for rare earth minerals, some energetics, different things. This is a problem for us as we move forward.”

The review isn’t necessarily a part of the America First ideology pushed by the White House, but given the implications of calling out imports from China and elsewhere, it can certainly be considered a close cousin. Since aggressive protectionist Peter Navarro, White House Director of Trade and Industrial Policy directs the review we can expect strong pushback against China’s near-monopoly of rare earth elements and its booming investment in US high technology companies.

Leading the review is Eric Chewning, who runs the Pentagon’s manufacturing and industrial base office. But civilian agencies from Commerce to Homeland Security to Interior are all participating.

When it comes to the study of rare earth minerals, sources say that the Trump administration will likely seek to break China’s monopoly on mining and producing minerals like Gallium and Germanium, which are critical parts used in the production of radar systems, infrared devices and fiber optics. 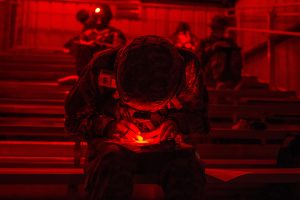 The United States defense industry relies on Chinese producers for 100 percent of its rare earth materials, which a 2016 Government Accountability Office report called a “bedrock national security issue.” A recent U.S. Geological Survey lays out the materials and their uses in stark detail, noting that the U.S. is completely import-dependent on these materials.

In December, President Trump signed an Executive Order instructing his cabinet to come back with a report by the end of June outlining a strategy to reduce the nation’s reliance on foreign minerals, calling their import “a strategic vulnerability for the security and prosperity of the United States.”

The Interior Department has taken the lead, and the report is expected to take a hard line on the Chinese having cornered the market, dominating both mining and production of the elements. In February, it released a report listing all of the minerals U.S. industry imports for its defense and civilian technologies. Tim Petty, assistant secretary of the Interior for Water and Science, noted at the time that “any shortage of these resources constitutes a strategic vulnerability.”

Rare earth materials are the byproduct of almost all normal mining activities, and while they can be mined and produced in the United States — which until the 1980s was meeting all of its domestic needs — a series of rules, and Chinese moves to undercut the market, dried up most domestic production. Getting that capacity back won’t happen overnight, said Jeffrey Green, a defense industry consultant.

The government “can use direct investment in industries, and R&D to innovate the next best technology to close the loops on supply chain gaps,” he said. The focus of the Obama administration when it came to rare materials was “reduce, reuse, recycle,” he added, “what was missing was production. This administration said you need basic production of these materials to set the market conditions to make sure U.S. companies can succeed.”

Once the rules limiting U.S. production took effect, “China entered the rare earth market at exactly that point,” said James Kennedy, president of ThREE Consulting and an expert on rare earth materials. The entire global market now flows through China, and “China can always underprice competitors,” he told me, as “they view this as part of their global industrial and defense policy. This is part of their industrial and defense strategy. No matter how many rare earth mines you open up, China can undercut them on price.”

But the industrial base study and the December executive order appear to indicate that the White House wants to change the equation, however.

One defense industry consultant told me that the market itself might spur action, once investors get a better idea of how fragile supply chains are, and react by moving money to more secure bets. That will push industry to be proactive.

Lord hinted as much in her remarks last month, saying the report “will clearly give categories where we are sole-sourced and where we have facility in the supply chain. And you will also see a round of efforts that we have to repair those fragilities.”

Following the release of the unclassified version, the Trump administration “will be coming out with a whole series of actions we’re taking as the government,” Lord continued, “to make sure we work with our allies and partners if we don’t have the capability domestically, so that we don’t have that dependency on China.”

The defense industry has been involved in the report from the beginning, John Luddy, vice president for National Security Policy at the Aerospace Industries Association told me. “We’ve been in close touch throughout this process” he said, and “we hope that the assessment would echo AIA calls for increased, regular order defense budgets, streamlined acquisition policy, targeted support for key capabilities, and enhancing the skills and capabilities of the workforce.”

The report is being unleashed at the same time that Congress is considering a bill to institute sweeping changes in the national security reviews performed by the Committee on Foreign Investment in the United States (CFIUS). The White House, Pentagon, and a bipartisan group of lawmakers are all behind The Foreign Investment Risk Review Modernization Act of 2017 (FIRRMA) that would grant the government more power to block technology transfers, the sharing of intellectual property with certain foreign individuals, and even scrutinize proposed land sales near sensitive military and intelligence installations in the United States.

The bill “is not trying to broaden the definition of national security, but broaden the transactions that are reviewable,” the Treasury Department’s Heath Tarbert told the House Financial Services Committee earlier this year. “National security concerns are changing over time so we want flexibility to keep up with new threats.”