DROP ZONE COCKATOO, QUANTICO: You can hear it over the roar of the wind and the distant thump of mortar rounds: the high-pitched buzz of miniature drones. I track the incoming quadcopter with my camera until I’m starting to bend backward and I realize it’s hovering directly above me. That’s my cue to move, shortly before a contractor nearby hits the “release” command on his tablet and the drone drops its cargo with a klunk: a metal ammo magazine. 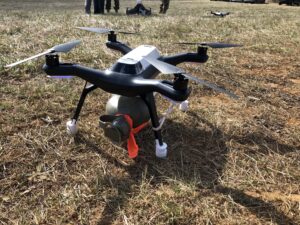 A quadcopter set up to deliver a single canteen as a test of robotic, retail logistics.

The magazine is empty — no live ammunition for today’s test — but it shows what could be done. All day long here, racking up more than 400 sorties, Marines and contractors are tapping tablets to summon mini-drones from a central “Hive” to drop empty magazines, canteens and MRE ration packs on demand. Instead of the standard 96-hour cycle from requesting resupply to getting it, requests are filled in minutes.

Since the Civil War, the US military has been famous for wholesale logistics, building “iron mountains” of supplies. But now we might be entering an era of retail, robotic resupply. The Marines pioneered the idea of supply drones with the K-MAX unmanned helicopter in Afghanistan, which could carry three tons of cargo, but this iteration is dramatically smaller, delivering just five pounds at a time.

Why the Marines? Admittedly, they’re not alone in this experiment. Most of the drones and the software to control them — called ATAK, Android Tactical Assault Kit — were originally developed by DARPA, the Air Force Research Laboratory, and the Army for reconnaissance. But it was a Marine reservist, transport officer Maj. Chris Thobaben, who had the idea to repurpose the drones for logistics after seeing too many comrades killed or wounded on supply runs in Iraq. It was Marine generals, who’ve made a point of fostering young innovators, who gave Thobaben room to run. 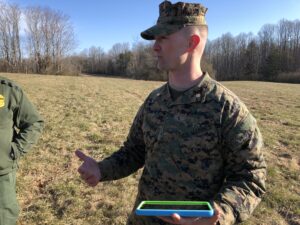 The Marines have always been the most expeditionary of the armed services, trained to travel light. What’s more, their new concept of distributed operations calls for them to spread out in small, fast-moving units to make themselves hard targets for precision-guided weapons. So how do you keep these scattered troops supplied, without tying them to vulnerable supply lines or forcing them to carry everything on their backs?

If drones can carry packages for Amazon or medical supplies for Zipline in Rwanda, Thobaben reasoned, why not ammunition, water, food, and batteries for dispersed Marines? The goal, he told today’s visitors — Marines, reporters, and a pair of uniformed Customs & Border Patrol officers — is to be able to support even a single individual on his or her own in the field.

Of course, nobody’s shooting at Amazon’s drones (yet) or trying to jam their transmissions, so the military faces a much tougher problem than civilian delivery.

A First Draft of the Future

Today’s test was just a rough-and-ready proof of concept, put together in two and a half months after Thobaben got approval from Marine Corps brass and funding from the Office of the Secretary of Defense.

So, for example, while there is a box of automated racks to recharge, launch, and recover the drones — called a “Hive,” it looks more like a mechanical dovecote — a human still has to attach the supply packages by hand. This 90-second process is the biggest bottleneck right now, Thobaben said. A fielded system would need an automated loader, which would require packaging supplies in standard-sized containers for ease of handling, rather than directly attaching a canteen, magazine, or MRE packet. It would also need a larger drone, powered by gasoline instead of batteries, that could carry larger loads — say, 15 pounds instead of five — a longer distance. 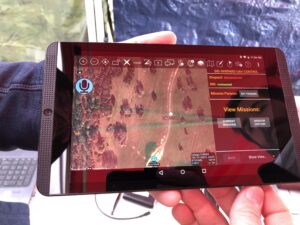 In another expedient that wouldn’t work on the modern battlefield, the drones, the users’ tablets, and the central server running everything are linked over commercial wifi. The drones navigate by GPS, which likewise can be hacked or jammed. A fielded system would need secure communications and navigation.

Even as it stands, though, this version is already fairly resilient, Thobaben argued. First, the software is certified to security level four by the NSA. Second, the only message that has to get through is the relatively small one containing the desired supplies and location for delivery. Once that’s received, the central server launches a drone that proceeds the rest of the way autonomously, without needing further updates from the server or orders from a human. (You can have it drop the supplies on command from a human or simply drop them automatically on arrival).

Then there’s the drones’ obstacle detection system. “It’s being done right now by crashing,” Thobaben said. Currently, the drones rely on GPS to move from one waypoint to the next, and are unable to sense obstacles in their environment. If one drone hits a tree, then the user reports a failed delivery and the software knows not to try that particular route again. Similarly, the drones don’t have altimeters or robust landing gear to land on unfamiliar terrain, so they just hover over the designated point and drop things.

The technology to do collision avoidance exists, however, and it’s not prohibitively costly. Thobaben’s team demonstrated one approach this morning, a drone with a pair of stereoscopic cameras and obstacle-recognition software that repeatedly refused an operator’s best effort to fly it into a tree. 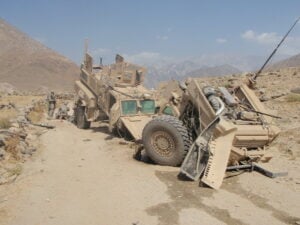 All that said, even in a refined and fielded system, you’d still lose drones. An enemy with a high-powered jammer, the right hacking tools, or an ordinary machinegun could kill individual drones easily. But that’s a lot better than losing ground vehicle and their crews to roadside bombs, as we did hundreds of times in Afghanistan and Iraq, Thobaben argued.

One Marine he knew died trying to deliver four cases of water, the major recalled. Using these drones, with their five-pound payload, that would have been ten flights. If you lost a drone, the replacement would cost $270 — and no lives.

The larger drone Thobaben would like to see for the final, fielded version would carry about 15-22 pounds, so it could move that much water in three or four trips. Many commercial companies are looking at cargo drones with a roughly 300 lb payload, so they could carry humans and act as air taxis. But the major thinks a smaller payload would work better for the military. It would minimize the loss of any single drone and allow the system to deliver small groups of troops precisely what they needed.

If you need to scale up, Thobaben said, just add more drones. The team has had as many as 32 in the air at a time, he said, but “within a year, we can scale to thousands.” 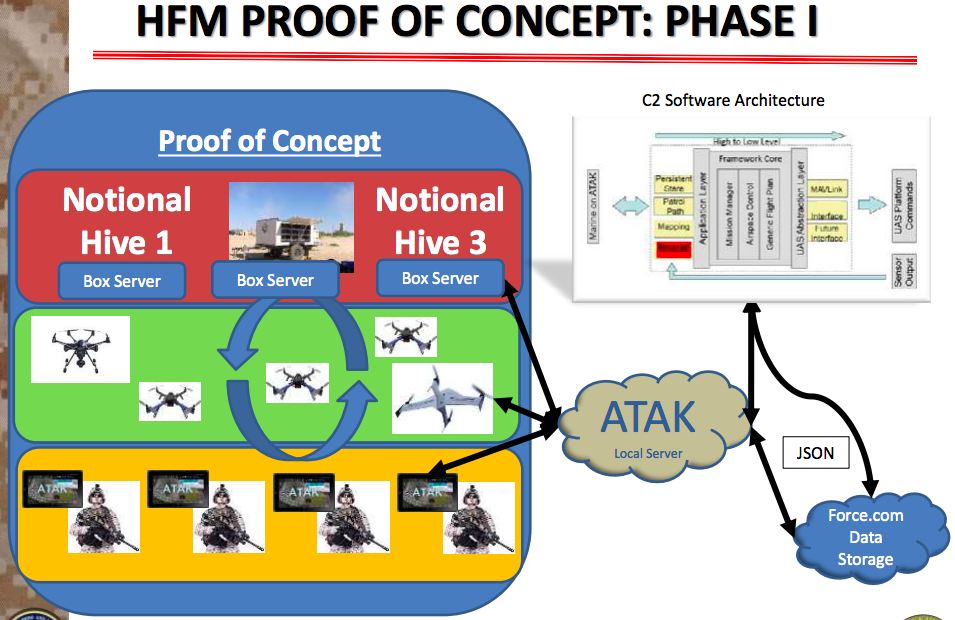