Posted by Richard Whittle on November 3, 2015 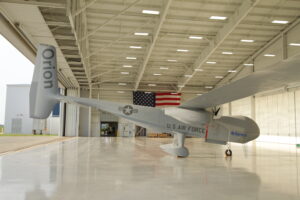 “When Bob Otto says they have no requirement, that’s just so disingenuous that it’s hard to get my head around,” said Langford, referring to Lt. Gen. Robert Otto, deputy chief of staff of the Air Force for intelligence, surveillance and reconnaissance (ISR).

Otto’s response, in a separate interview with Breaking Defense: “Oh. I must have frustrated him.”

Aurora built the medium-altitude, long-endurance Orion partly at its own expense, partly using Air Force money, to help meet what Otto himself calls the “insatiable” demand for ISR from combatant commanders. Langford thinks his company succeeded wildly. From December 5-8, 2014, the diesel-powered Orion set a world flight endurance record for unmanned aircraft at 80 hours — and landed with 60 hours of fuel left, Langford boasts. Orion could have stayed airborne five days, he said, but officials at China Lake Naval Weapons Station needed the range the drone was using for other tests. 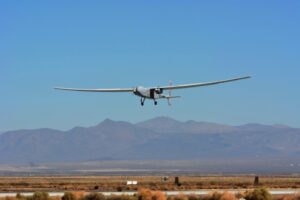 Now Langford fears history is repeating itself. Just as the military declined to buy Predator inventor Abraham Karem’s first revolutionary endurance drone, the Amber, the Air Force has no plans to buy the record-setting Orion. Instead, the service has Aurora doing tests to get the drone military certification, a costly process that explains why the one existing Orion is in a hangar in parts as its components get tested.

Aurora says the long-winged (132 feet), slow-moving (77 to 97 mph) unarmed, largely automated Orion could carry up to 1,200 pounds of sensors from Guam to the South China Sea and loiter at 20,000 feet for more than two days, or do similar missions over Africa.

“Orion is really designed to overcome what AFRICOM [US Africa Command] calls the tyranny of distance, where you just don’t have anything close by,” Langford said. AFRICOM’s commander, Army Gen. David Rodriguez, told Congress last year he was getting just 11 percent of the ISR he needed. 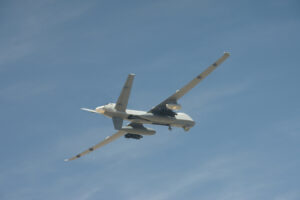 Otto said the requirement has to be more specific than just needing more ISR. “The technology that they are presenting is long endurance. I get long endurance at two and a half times the speed with an MQ-9 ER,” Otto said, referring to a new Extended Range version of the General Atomics MQ-9 Reaper that debuted in August. Two auxiliary fuel tanks add six or more hours to the Reaper’s  usual maximum endurance of 27 hours, Otto said. As for ISR requirements, he said, “the question is, where are you going to base it from? What kind of access do you need? Do you need to carry armament? Do you want a holistic package? So the situation changes the answer.”

Money is also an issue, Otto added, as are priorities. The Air Force has just won Defense Department approval for an ISR “get-well plan” aimed at easing the strain on its overworked drone operator force, which has been losing burned-out pilots faster than it can train new ones. Under that plan, the Air Force has reduced from 65 to 60 the number of daily combat air patrols (CAPs) it flies for combatant commands using medium altitude Reapers and armed MQ-1 Predators. The Army is to pick up the slack by providing 16 CAPs using its armed MQ-1C Gray Eagle, a Predator derivative, and contractor pilots are to be hired to fly an additional 10 Predator and Reaper CAPs, increasing the total to 86.

“In a situation where we have so tremendously invested in capacity and our pilots are stressed and we’re in a sequestration environment, it’s incumbent on the Air Force to be extremely deliberate in its investments,” Otto said. “Given that background, I don’t see anything in the Orion that…fills a gap that must be filled by a platform like the Orion.”

Langford is hoping others will. And if the Pentagon won’t buy the Orion, he’s hoping a combatant command hungry for ISR might go for a fee-for-service rental instead. US Special Operations Command (SOCOM) has done something similar with Boeing for years, buying ISR services from its Insitu subsidiary, with contractors flying the ScanEagle drone.

“We are actively trying to raise money from private equity sources to build a system of three Orions and put them out where the combatant commanders could lease them from us – essentially rent flight time — and we could provide flight services.” Langford said. “That’s being actively considered by the military. They haven’t decided to do it but they haven’t rejected it. CENTCOM [Central Command] and SOCOM are the kinds of people that we’re talking to.”